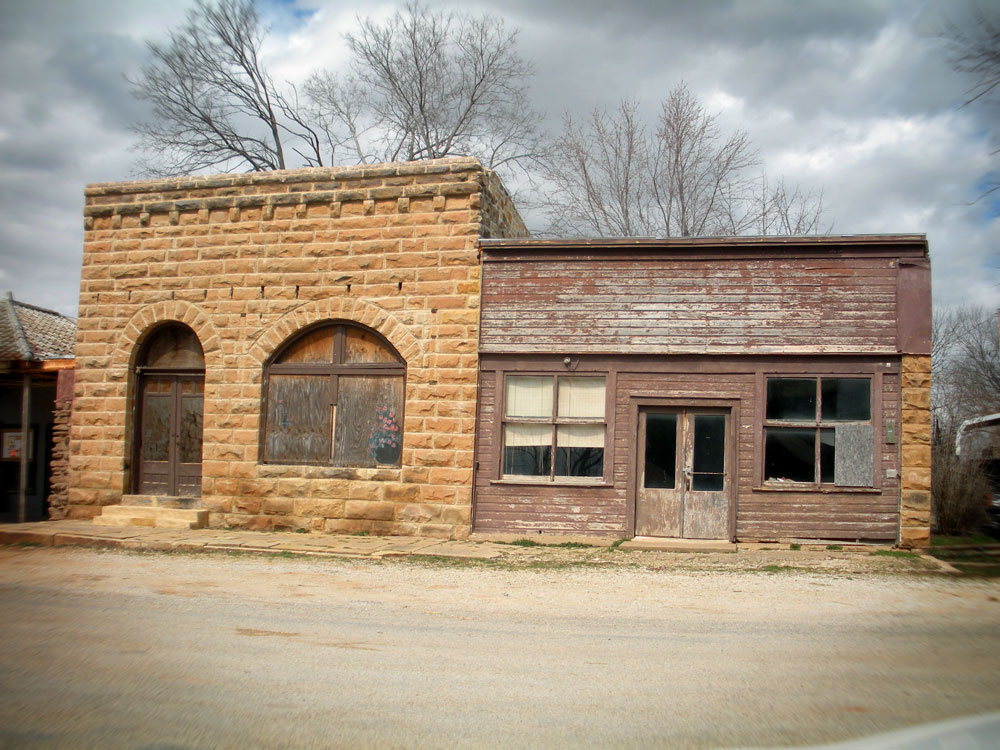 For much more great history, visit the Official Blackburn Website

The incorporated town of Blackburn is located in Pawnee County on Blackburn Road, halfway between county roads E0440 and E0450. Approximately twelve miles east of the county seat of Pawnee, the community developed after the Cherokee Outlet land opening on September 16, 1893. Named for Kentucky Sen. Joseph C. S. Blackburn, a post office was established on December 15, 1893. Positioned on the south side and at a natural ford of the Arkansas River, a toll bridge, a wagon bridge, and a ferry at various times connected Blackburn, Oklahoma Territory (O.T.), with the Osage Nation to the north. During the territorial era before 1907 statehood, Blackburn was one of the whiskey towns in O.T. that bordered the “dry” Indian Territory. The town was incorporated on April 21, 1909.

Blackburn’s economy has been primarily based on agriculture, with cotton and corn as the principal crops. Consequently, the community had a cotton gin, a flour mill, a livery stable, and several blacksmiths. Due to a drought in 1901, hundreds abandoned their farms. Those who remained formed an association and held an annual reunion, at least through the 1950s. Blackburn hosted the Pawnee County fair from 1903 to 1909. Although oil was discovered nearby, Blackburn never developed into an oil-boom town. Early newspapers included the Blackburn Globe, Blackburn Flash-Light, and Blackburn News. By 1909 the community boasted two banks, a public school, and three churches.

One of those 25 families is the Denny family. When we came into town, the first place we stopped was “Denny’s Service Station”, where we were greeted by Mrs. Billye Denny. She grew up in Blackburn, and went to school in the school pictured below. She told us stories about the old main street, and the many businesses throughout the years. Her grandfathers home is also pictured below in the last group of images. Pictures 18 and 19 below are of the stained glass window pane designed by Billye’s daughter at Blackburn United Methodist Church which is listed in the National Register of Historic Places.

Being strangers in a small town is often an experience that many feel indifferent about. However in Blackburn we were welcomed whole heartedly. Mrs. Billye Denny was ready to show us this very dynamic town and share it’s history with us. Blackburn’s tale is one of boom and bust. Yet, there are people who still love this hidden treasure, and we were lucky enough to share it with them. Blackburn is a town filled with people who are determined to hold on to the dreams of the founders. People who dreamed to create a place of wealth and prosperity. These same dreams live on in the spirit of the residents of the town of Blackburn.

Parts Taken from Encyclopedia of Oklahoma History and Culture – Blackburn

I grew up their in the 90's & I wouldn't trade it for anything! By the way billy joe makes a mean sandwich! Being a kid in this town was awesome everyone knew everyone and it was so safe I rode my bike & played all over the town with all the other kids. .the old bridge was my get away, oh how I miss that pillar id climb down on it and watch the water flow past, it was the definition of serene.

I went to church there sometimes,went 1 yr. of high school there. nothing but good memories. howard foust

I lived in Blackburn in the early 1990's and absolutely loved my time there. If I could I would move back to that area in a heartbeat. The small town is a great place to raise kids. Everyone there was like family and you were always welcome at anyone's house.

I know where you lived too!

It is the only town that I ever moved to where the morning after moving there (while sitting in the front porch swing) a lady walking down the street stopped and proceeded to enlighten me as to my history. Seems she had gotten the information from my parents who had lived in the house prior to my family moving there. Loved and will always treasure the time that we lived in Blackburn. I still return from time to time just to drive around and see the place.

My Grt, Grt,Grt Grandmother Jane Ivie lived here in 1920 she was 88 years old. She may have been Creek .

This was a very interesting read! Lots of opinion and very good research to be shared! Good feedback from the online readers as well. I must commend the author and web designer as well. Thank you for taking the time to share this with us.

I just recently purchased one of the abandoned stone houses in Blackburn, Oklahoma in August 2019 that is featured here on this web page. It’s caddy cornered from the old gas station, I’ve started the rebuilding process and plan to move into the house upon completion as my permanent residence. I’m very interested in any pictures or information that anyone out there may have concerning this little house. Even stories that can help me trace down it’s history would be very helpful. Anybody reading this that is interested, is more than welcome to stop by anytime, I’m happy to show… Read more »

All materials copied from a different supply

Where is your proof fat mouth?

My great grandmother had a house in Blackburn along the river. I visited the ruins ~ 30 years ago and saw the very wood burning stove she used to cook family meals on Sunday after church. Anyway, don't know much but would like to learn anything more I can.

Blackburn is a large town in Lancashire, England. It lies to the north of the West Pennine Moors on the southern edge of the Ribble Valley,

My great-great grandfather and g-g grandmother settled in Blackburn sometime in the turn of the century – – I have a postcard my g grandmother sent to her dad postmarked 1907 – -and another postmarked 1911. They were the Herringtons. I found the grave of my g-g grandmother Eliza Jane Herrington in the Blackburn cemetery. They were originally from Kentucky. G-g granddad was a Confederate veteran. He moved to Inola to live with his daughter and husband sometime in 1912-1913 (?) in Inola That part of the history is pretty fuzzy – – why he left and exactly what year

i friended you just now on Facebook. my name is ellen MARIE blum. my mother's half brother was william monroe. his momma, Leona Messenger Monroe died young and her sister Mildred, who married Clarence Jeffers – helped raise "uncle billy" whom i never got to meet.
Dying to hear what you know about the whole family drama from w-a-a-ay back. My mom-Billy's little sister–is alive (79) and she has such fond memories of him. would love to speak to you. 972 567 9804 or mulbe@aol.com
I WOULD greatly appreciate it.

New Mayor of the town of Blackburn is Gary McClary as of April 12, 2012. The other two Town Trustees are Vickie Denny and Mike Caughlin. Town meetings are held on the second Thursday of the month at 7:30 in the Schoolhouse. Phil Pinkstaff served as Mayor from October 2004-September 2011. Marilyn Pinkstaff served as Clerk-Treasurer from october 2004-August 2007.

My father, Rufus Millburn and his brother Rex Millburn(deceased) were born on the MIllburn farm not far from Blackburn. HIs mother's maidern name is Ethel Pinkstaff, so I know we are related. It's been several years since we brought Dad up to Oklahoma to visit his original home in Fairfax, and we stopped by the Blackburn cemetary to visit the graves. I have a cousin, Ronald Millburn that lives in Sand Springs. Dad is now 93, can't walk or see too well but his mind is sharp. Any history around these families would be of great interest.

grandmother owned the store there so many fun summers there

My father was raised part of his life by his Aunt Zora and his Uncle Joe. They lived in Blackburn and we visited many times when I was a small child. I do not remember their last names but do remember that they lived in a one room house with no amenities. If anyone knows of Zora and Joe, I would love any information you may have regarding this couple.

I am from Blackburn, I have a Zora and Joe in my family tree what where you Aunt and Uncles last name? My name is Heather Blackburn.

I was born in 1936 at a house across the street from the Methodist Church. I was told that I cut my teeth on the pew. Looking at the photos I see a spot where my family would have sat, and it looks like the pews have been refinished, but teeth marks still show through.
My strongest memories were of a dust storm that lasted more than a day amd a grasshopper plague that stripped all the vegitation.

I returned to Blackburn on Sunday July 1, 2012 to attend the methodist church that I have such wonderful memories of. They say you can't go home, but I did. I was welcomed and even talked with at least one woman who remembered my family. Pretty good for having left in 1941.
It was sad to see so much of the town collapsing but a joy to see the church in such beautiful condition.
Keep up the good works.

Great job guys, You need to get more in the videos Bill, And maybe even an interview or two Bill, ya'll keep up the GREAT work!