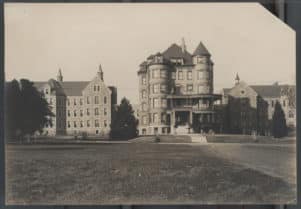 It was determined that Topeka needed a mental institution around the 1870s, the state legislature would put up $25,000 under the condition that they wouldn’t have to buy the plot of land for it. Thanks to the donation of $12,000 from both Topeka and Shawnee County 80 acres of land was set aside for the massive project. John G. Haskell, a popular architect, got to work on the blueprints and construction and by the late 1870s, Topeka Insane Asylum was in business. The name was changed shortly after in 1901 to Topeka State Hospital. The first superintendent was Dr. Barnard Eastman who was the former superintendent at Worcester, MA asylum. Up until 1919, it was required that all patients be admitted only through a court order which Dr. Eastman argued that the mentally ill were sick, not criminal and these trials were not fair treatment. He projected an image of a facility that took an engaging hands on approach instead of a medicinal route to healing. But it soon came to light that that was not the case. 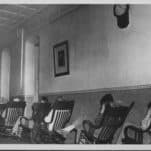 Patients in rocking chairs discontinued around 1950

From the time it opened its doors right up until it was closed TSH accumulated a lengthy list of reports for abusing, beating, and raping of the patients in its facilities. Even some staff members were suspected of murder. Amongst its cruel practices included forced sterilization, castration, starvation, and hydrotherapy. You might be thinking, hydrotherapy? Cruel? In the early 20th century the common practices of hydrotherapy for mental patients included high pressured jets hitting the body, wrapping of the body in ice-cold towels, and being strapped and submerged in a bath for hours or even sometimes days only being allowed to go to the bathroom. Fifty-four sterilizations occurred between 1913-1921 and from there increasing drastically until the practice was ended in 1961. At least 2,851 people were castrated or sterilized in the state of Kansas, most procedures being performed at TSH. In 1948 the hospitals’ conditions were highlighted when it was realized that they lacked many professional personnel needed, legal documents were “lost”, and that many patients’ identities couldn’t be verified. It was also found that due to a lack of hospital employees patients weren’t getting proper mental evaluations. 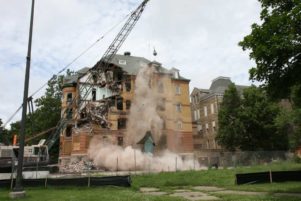 On May 17, 1997 due to lack of funds and privately owned mental programs becoming increasingly popular the facility finally closed after 125 years in service. The buildings sat for nearly 13 years, rotting away. Vandalism was frequent, despite the cities best efforts to put steel wire mesh over boarded-up windows with tar over the screws. People continued to get in and wreak havoc. It was determined the buildings were not safe due to asbestos, lead paint, and the decay of the floors and ceilings in the buildings. On June 1st, 2010 the wrecking ball was brought to the main admissions building and then some others around it soon after. Some speculated the city was so ashamed of what had occurred there which is why they went as far as to even demo the concrete slab the buildings once sat on so there is no trace the hospital was ever there. Five buildings still remain abandoned on the property.

During the early 1900s when many newspaper articles were coming out about the abuse there was a story that came out about a patient named Dodd. Witnesses of the hospital came forward to say that Dodd was beaten on numerous occasions, often being knocked to the ground and strangled by the attendant(s). Witnesses saw Dodd get dragged into Room 18, the door was shut and there were sounds of a struggle and then a muffled moan. Dodd was carried out after being pronounced dead on the scene. A local attorney tried to take action against the attendant accused of Dodd’s death but the governor of Kansas refused to open an investigation, protecting the alleged killer. 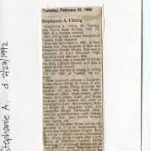 Stephanie Uhlrig worked for the hospital as an activity therapist. Often times she would take patients on field trips as a part of their treatment plan. On February 23, 1992, Stephanie and another therapist named Robin Figgs, took some patients to see a movie. Amongst those patients was 25 year old Kenneth Waddell. Waddell who had been transferred from Larned State Hospital in April of 1987 trusted Uhlrig with his coin collection. When the group went back Kenneth then asked Stephanie for his coins and the two went to retrieve them. At around 6 pm that night Mrs. Uhlrig’s husband phoned Mr. Figgs looking for his wife, whose car and coat were still on the grounds. Stephanie was found later that night in a bathroom stall propped up as though she had been using the restroom, unresponsive. It was ruled that her death was caused by manual strangulation and that she had been sexually assaulted. On February 27, 1992, just 5 days after the murder Waddell confessed to police that he had killed her. Kenneth D. Waddell was convicted and sentenced on December 16th of that year to life imprisonment for 1st degree murder and 3-10 years for sexual battery.

A 55-year-old woman known as Mrs. X was placed in the asylum in 1932. She allegedly suffered from delusions and believed her husband was trying to kill her. A year in she was supposedly getting better, fast forward 4 years later and they said she couldn’t be released. After 9 years she was said to be “incurably insane.” At 17 years she finally was given a new doctor who discovered that giving her human interaction and attention for just 30 minutes each week her “condition” began to improve tremendously. At 72 years old it was determined Mrs. X was well enough to be paroled back into society and worked as a nurse and companion housekeeper. She was one of the longest patients the hospital ever had.

John Crabb was a Danish man who worked as a dishwasher in Topeka in 1931. One night a coworker hit on his girlfriend causing him and his coworker to get into a verbal altercation resulting in Crabb going to jail. While there, John would not eat or talk and was “diagnosed” as insane. He spent 20 years at TSH where he was labeled “incurable.” Staff believed that he was insane due to his never-ending will to convince them that he was not insane. A Danish insurance company learned of this and demanded Crabbs be tested again. This time he was labeled sane but was kept another 10 months before finally being released from TSH in 1950.

Back then official death records were not kept in state records. This, unfortunately, means that all 1,157 patients were left buried on a plot of land most with no headstones and no way to identify them now. The publicly funded asylum’s cemetery consists of only 16 original headstones until on May 24, 2006 two large memorial headstones listing the names of patients that had passed away were erected, as well as a cemetery marker and a memorial bench.

“infected quarantine” sends chills down my back

Before it was demolished I trespassed onto the grounds and got pictures; but the pictures I can share don’t tell the story of 1500 people ( many were children) that died , were buried with no markers or graveside service…I went in late afternoon and found the entrance where it looked like homeless people had been coming and going….. living. I decided not to go in.
No flashlight. No one knew I was there. I was afraid.

I am confused about this information. The only mental hospital I am aware of was called Menningers named after Carl Menninger and his brother. While the photos you provide closely resemble the hospital I refer to, I have never heard of the severe mistreatment, The mental hospital I am referring to was so well known and highly regarded that many celebrities such as movie star Betty Hutton spent time there to recover. Can you comment on this please?

There are several books about the Menninger Hospital.

Ann if you look this hospital up you will find the many stories and pictures and information. Menningers was a different facility entirely and as you said was well known for its state of the art, ahead of its time treatment. Topeka State Hospital was not apart of Menningers. Thanks for the comment!