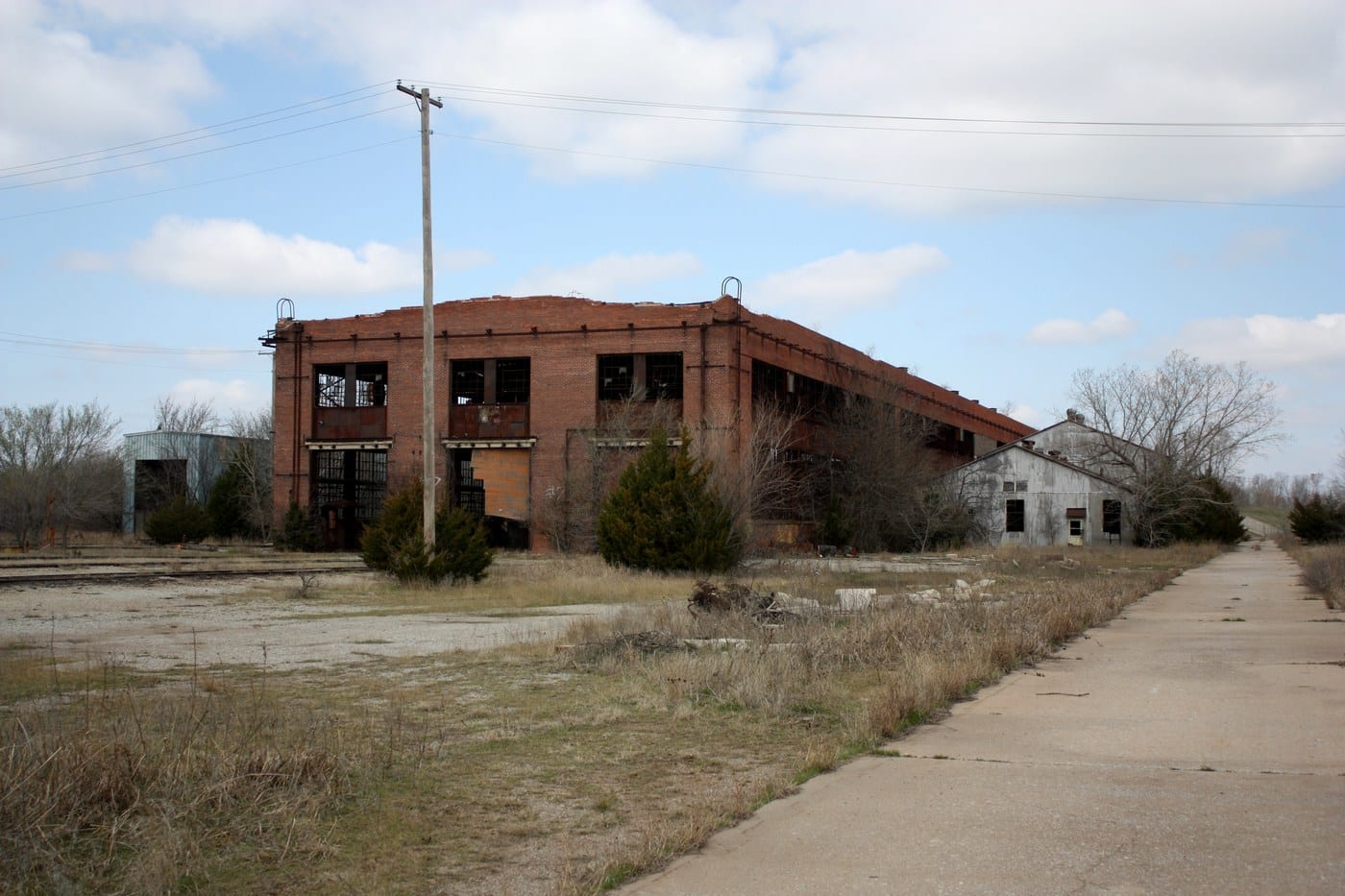 Founded from the creation of an amended charter issued by the Rock Island and La Salle Railroad company, the famous Chicago and Rock Island Railroad was established on February 7, 1851 with the first lines running between Chicago and Joliet, Illinois. The rail line was continued on to La Salle and finally reached Rock Island in 1854. The railroad continued building a huge empire that reached just about every major city in the central and midwestern United States.

Until it’s last days in 1980, the Rock Island Line reached into Arkansas, Colorado, Illinois, Iowa, Kansas, Louisiana, Minnesota, Missouri, Nebraska, New Mexico, Oklahoma, South Dakota, Tennessee, and Texas. By 1984, all the railroad’s remaining locomotives, rail cars, tracks, equipment, and property were sold to scrappers or other railroads in order to pay all remaining debts incurred by the line.

One steamboat was destroyed by fire after running into a bridge operated by the Rock Island Railroad. Abraham Lincoln, then a young attorney, represented the Rock Island in the case against the steamboat operator. Lincoln argued that the steamboat captain was at fault and helped to show that bridges across navigable rivers were an advantage to the country [1].

The Rock Island Railroad Rides Into the Popular Legend
The Rock island continued to grow throughout the latter half of the 19th century, buying up other, smaller rail lines and adding them to it’s own network. From the early 1900’s through the mid 1950’s, the Rock Island Line was a growing and prosperous railroad. Because the railroad covered such a large area of the Midwest, it was well known by most folks in the Midwest.

The rail line gained wide public popularity in the 1940’s when it was glorified in the song “Rock Island Line” by American blues/folk singer Huddie William Ledbetter, also known as Lead Belly. The song was later made more famous by popular singers Johnny Horton, Lonnie Donegan, Bobby Darin and even later by Johnny Cash. The first lines in the chorus of this song are still remembered today, “Rock Island Line, she’s a mighty good road, Rock Island Line is the road to ride.” The song was a hit in the U.S. from the 1940’s through the 1970’s.

Final Days of the Legendary Rock Island Line
During the first part of the 20th century, railroads were being built everywhere across the U.S. Until the advent of commercial aviation began to erode the passenger train business in the early 1950’s, trains were the primary mode of travel in this country. After the 1950’s, the glut of railroad companies and lines became apparent.

1965 was the last year Rock Island made a profit, and it continued to lose money until the merger with Union Pacific was finally approved to move forward in 1974. By this time, the UP was no longer interested and walked away from the merger, taking with it the last hope of Rock Island’s survival.

Things only got worse for the now nearly bankrupt railroad as creditors pressed for payment and operational costs continued to mount higher every year. Attempts to reorganize in bankruptcy were refused by the courts. On January 24, 1980, a judge ordered the Rock Island Railroad to be shutdown and it’s assets to be liquidated for much needed cash. On March 31, 1980, the final operational shutdown and liquidation of the great Chicago, Rock Island & Pacific Railroad occurred.
Gallery Below

i have heard recently, the engine house has been razed, much to my dismay. anyone know if this is true? i certainly hope not.

I am a retired UP engineer and a former T & P employee from Louisiana. I borrowed out to Oklahoma City to work on what the Katy acquired of the ROCK in 1989. The state of Oklahoma gave the Katy $35 million to run trains but someone spent the money in something else- probably their Bahamas bank accounts. I broke in all over the division that ran from Enid to Duncan, OK. Never realized Halliburton ( a big oil driller) was HQ'ed in Duncan. It was a sad scene on the main line. Half the sidings were blocked with overturned… Read more »

Anyone know any history on the old El Reno Railroad?

Those are nice photos thanks

FWIW, this building has been demolished. Drove by yesterday (12 June, 2016) and there's nothing but a bare patch where the shop once stood. It still appears on the Google satellite image, but the gentleman at the Canadian County Historical Society Museum (a former Rock Island employee) said it was demolished within the last year. He couldn't tell me if the contaminated soil was also removed. FWIW, the metal building directly south of the shop, which served as the CRI&P paint shop, is still standing…

Structure was dismantled during February 2016.

Ik its not legal but sometimes ill go walking and take a visit to that building and it changes every day. Parts are being taken out and taken away, new graffiti shows up, and things are falling apart.

i have heard recently, the engine house has been razed, much to my dismay. anyone know if this is true? i certainly hope not.

According to a post in the Sooner State Rails facebook group, it does appear that the engine house is in the process of being demolished. Sad turn of events for a piece of Oklahoma history.

Yes. In a Rock Island email group, a member reports he was at the site last week and the red brick shop building is currently being demolished.

How can one gain access to this facility for taking photos inside with a vehicle or two?

All these slim data are made with parcel of capabilities comprehension. I like it a considerable measure. This was a helpful distribute and I think it is fairly easy to see from the other criticism too that this distribute is all around created and valuable.

When I was a little kid, my Grandad worked in the offices there. He died in 1978. Had he been alive when the Rock went out of business, that would have killed him

Just turned 71. When I was 19-20 I worked out of Amarillo, Texas' on Rock Island B&B # 4 ( Bridge and Building Gang Number 4 ) Lots of memories. Worked Texas, Okla, Kan and New Mexico. Primarily building Wooden pile driven bridges. I doubt there are many old Builders left who used a coal fired, steam driven Pile driver. I can't remember if it had a 6,000 or 8,000 hammer. Later we got a diesel and they were on the light side. When I was 12 to 15 we lived in Rawlins, Wyo. Dad was a brakeman and on… Read more »

I I ran acrossran across this website August 14, 2013…I'm retired from the Cotton Belt but worked as a system Maintenance of Way machine operator for the Rock from 1974 to the last of the show in 1980. I carried my seniority to the St. Louis Southwestern until 1987. Most of these posts go way back but if anyone adds anything new here I'll be notified. I like to browse Rock Island history here on the web..

it was so sad to see the deferred track maint. while greedy upper mgmt. deferred maint. to this once mighty fine line since 1963….in hopes of merging w/up. all up had to do is wait it out….until the track was junk/and get it for pennies on the dollar…and thats exactly what they did. but greed and corrupt r.i. mgmt. was the underlying culprits that destroyed this once mighty line. up has it now, and refuses to put any ctc or anything on it. now here on bnsf in arkansas city ks, we see numerous up trains running that should be… Read more »

my name is marc shields/i posted above. if interested call 620-307-6544/ leave a message and number and i will return your call. i have photos to share of el reno shops while still in service, plus, i love the old rock island.

Also, where the wash track was, west of the overpass, was a company called Sunbelt Rail Car Repair, and the operated out of an old boxcar that sat on the ground. Don't know if they're still there.

I had blue prints of the yard at one time. We had a house fire a couple years ago, and I think they were consumed, but we may still have some at work. I also recall an aerial photo of the yards as well.