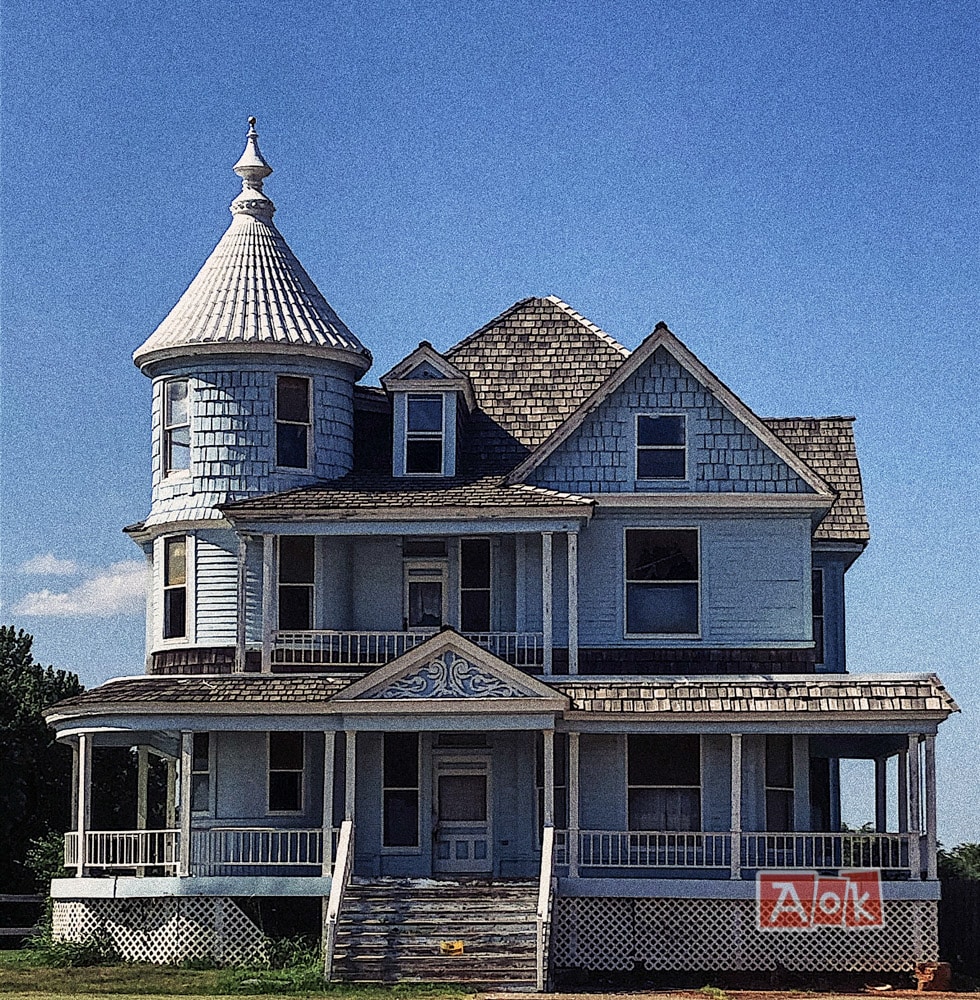 The Victorian-style elaborate Goodholm House was the project of Swedish immigrant Andrew Goodholm. He was prominent in the Oklahoma City community being known as a builder, a city councilman and organizer of the Acme Milling Company. He was a man of many talents and was successful enough to start construction on his own grand home in 1899. The stately structure was massive for its time requiring almost three years of construction before finally being completed in 1901. Upstairs on the third floor was the ballroom where the family hosted parties and played games. The house was occupied by Andrew, his wife Agnes, and their six children, two of them being born in the home, until 1918 when they left for Stillwater to run a business.

Who occupied the house between 1918 and 1954 is unknown at this time. But in 1955 the house was obtained by a man named Manzy Leon Jones and his wife Gracelyne. Like Andrew Goodholm, Mr. Jones was a known general contractor around Oklahoma City working on commercial and residential structures. He envisioned the house as apartments and worked to turn them into that. In the process of partitioning the structure, porches were torn off and the original layout of how the house looked when became clouded.

The house was then sold to James Fentriss of Fentriss Sound Company in 1977. A preservationist himself, Fentriss was more than eager to bring the house back to its former glory. He offered it to any group capable of restoring it to the original blueprints prior to it being apartments and moving it to a different location. If his fight for preservation was unsuccessful and someone didn’t step up to take on the project the house would then be razed to make way for commercial development.

In a last-ditch effort to save the historic home then-owner, James Fentriss donated it to the State Fair. Sandy Saunders, State Fair President, accepted the donation and saw the value in preserving history from that era. The big move happened on August 14, 1979, when the Goodholm House was broken up into several different sections and lifted by crane onto trucks then transported to the fairgrounds. Reassembly took place and talks about the restoration ensued quickly as an eager gathering of people wanted to be able to walk through the turn of the century home.

Architect Jack Scott was consulted to give an estimated renovation cost and determined it to be around $100,000 just for the interior. Attention to detail was important and much care was needed in the project, shortly after its move the house was stabilized with a new roof and primed for painting. Years of replacement wallpaper was torn off to reveal the original, items were donated to the house such as a 175-year-old rocking chair, and an old baby carriage. Custom woodwork was done to return railings and porches back to their original state. With the help of two Goodholm sisters that walked through their childhood home, they helped lay out the lines of the original blueprints to help restorers fit the pieces back together. Renovations took much longer than anticipated not being completed until 1990 and only being open to visitors during the fair season. Tours of the home were limited to the first floor and attempts to fully furnish the mansion with furnishings of that era fell short many times with only pieces being loaned or on display here and there.

Unfortunately, the Goodholm Mansion found itself in uncertain danger once again, with the turn of the century the fairgrounds found themselves transforming with things like the B-52 plaza making an exit. When 2008 rolled around the Goodholm Mansion was brought the same fate and the home was required by Richard Harrison, ironically, a house mover of Harris House Movers. The home was dismantled and brought to his property where he and his family had high hopes of restoring it. His passing in 2012 left the job uncompleted and sat for years. Multiple break-ins and vandals wreaked havoc on the property with the owners seemingly not caring to board the place up. On September 26, 2021 the house was demolished with no warning with the owners stating that the reasoning for the demolition was because it “wasn’t a historic home,” and “there was no other option than to demolish.” The demolition has caused outrage throughout the community and those that remember touring the house over the years, a handful even stepping forward to say they offered to purchase the home with their offers being declined. The Andrew Goodholm House withstood 122 years of time only to become rubble in less than two hours on a fall morning.

Gallery Below of Andrew Goodholm House

Quite frankly, it was dumb to demolish the house. If the owner didn’t want to deal with it, he could have made a lot of money and sold it – left it in one piece for people to enjoy. I enjoyed looking at it just when driving by.
It was probably absolutely beautiful when first made and furnished.
How saddening that this was the outcome.

Our Calton families (all four brothers) lived there in the 1940’s. It had been turned into apartments already.
My Uncle Frank and Aunt Vinita, my Uncle Robert and Aunt Joyce, my Uncle Ed and Aunt Opal, and my parents Herbert and Pauline Calton all lived there. They each had one child Gary Calton, Cheryl Calton, Robert Calton, and Patsy Calton.
Mrs. Myers managed the apartments, the two Goodholm sisters owned it.
There was also a row of apartments outback. I have many photos.

Bet we would all love to see those photos.

I would LOVE to see the photos!

Would you mind e-mailing me the photos? I am very interested in the history of this house!!

This sad disaster should be laid directly at the feet of the Oklahoma State Fair board of directors. The house was on the fairgrounds for tour by fairgoers. It had become part of the warmly-expected State Fair experience economically accessible to families – and it was REAL OKLAHOMA. It was part of the permanent collection – like the monorail, the space needle, the wagon display, the ATSF locomotive/Frisco caboose – and the fabled racetrack. These – and I’m going to resort to carefully restrained hyperbole here – fine, fine statesmen – suddenly arbitrarily decided that the Fair was no longer… Read more »

The fair quit using it for tours as the volunteers to staff the place quit showing up to furnish the house and show it… Plus the fact it became quite unsafe. Sad but true… It never really even had a decent paint job. The blue paint you see was scabbed on over several layers of crackled old oil base paint which was never properly worked down in the first place. Looks great from a distance… But if you had the oppoirtunity to look it over like I did during the fair when I ran the volunteer center out of there,… Read more »

Thank you for your information on the indecent paint job. It’s clear now: nothing could be done to save this house. Maybe one day they’ll invent a way to repaint houses more decently. Until then, we’re going to have to continue smashing old houses to decent pieces.

Here’s what I don’t understand: why is this house not on the National Registry?

It was! If you read the article it was placed on the national registry in the 1980’s. Many people tried to purchase the house (including me!) when they moved init from the fairgrounds. They wouldn’t even return your call!!! Clearly the family was too selfish to sell it and wanted to see it destroyed rather than someone to restore it. I’m physically ill thinking about that house being destroyed rather than sold.

Exactly!!! Where was the communication crossed? Someone has be responsible for the demolition of a historic home. And to demolish that instead of selling it sounds extremely selfish on someone’s part

It was it said in 1983 so the big question is why did they demolish a historic building when it was registered?

I once lived in Nicoma Park and watched the crews move this house. It was amazing to see them work as there were other crews hired to remove the stoplight mast arms to get the house down 23rd street. Such a shame. If I could afford to build a home, it would be like that one was.

I just do not understand how they were not arrested for demolishing a house that was on the national register or did I get something wrong there, I got the information from this article it said it was a listed building

Listing a building confers no legal protection. The only adverse action the National Register can take is to remove a property from their list.

I’m pleasantly surprised at how good a condition the house is in still, at least Looking at the pictures!

It wasn’t gone 16 days ago when she posted her comment.

What a shame that they’d rather tear it down than to sell it to someone that could restore it. We have become a disposable society.

Many people, me included, would have donated to a fund to have this gorgeous piece of history restored rather than demolished.

This is such a tragedy! Why would you just give up on history like this?

Also, on the third floor (round room) lived a single Nurse.

Why would they demolish this? I moved to OKC last year and saw this house sitting at a home movers lot. and inquired about it. they said it was being lived in. what a horrible waste

Where was it originally located?

Where in NP was it located?

NE 23rd but I thought it was closer to Choctaw. At Harris House Movers location on North side of road.

Nice to think about it… But even when this house was on display at the Fairgrounds it was never RESTORED… in fact needed thousands spent on it to replace rotted wood and windows which were falling out. It was cut into SIX pieces just to get it out to the Harris property from the Fairgrounds.. and would have been a major restoration for anyone with or without a bottomless bank account.

It’s a gorgeous house hate to see it gone but I do understand when I owners get into that pickle they’ve got a let it go.