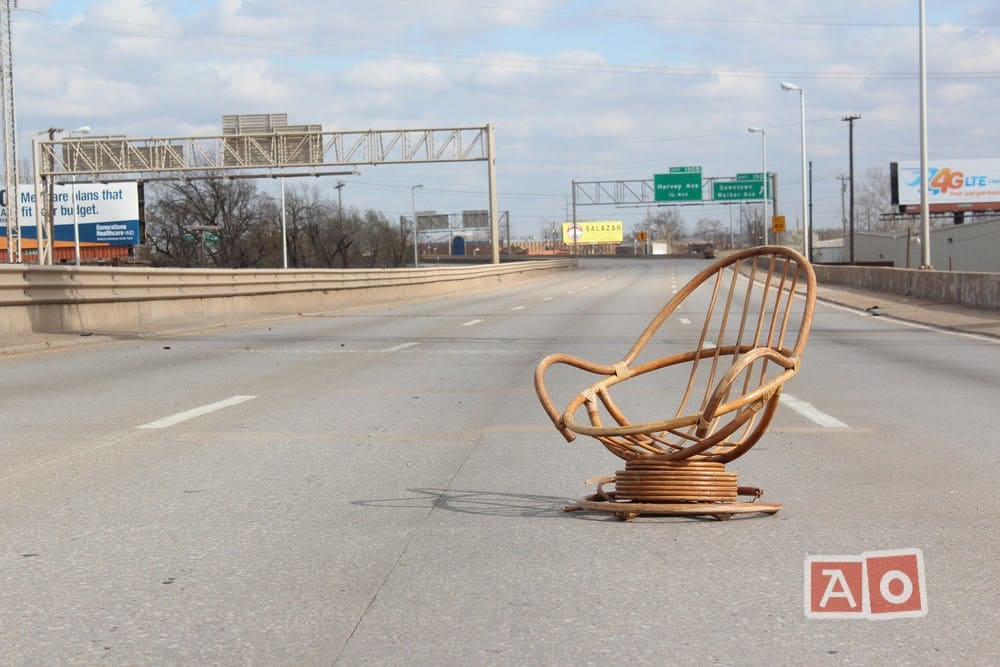 Completed in 1966, the original three-lane I-40 Crosstown was designed to carry up to 76,000 vehicles daily. By 2005 when ground was broken for the new highway, it routinely carried as many as 125,000 vehicles each day.

The Crosstown was constructed using an engineering process commonly termed as “fracture critical”, a process that has not been used since the 1970s because it does not provide redundancies. According to Brian Windsor, an ODOT structural engineer, without redundant support, the failure of a single beam creates the risk of total collapse of that section of bridge. The entire stretch of the Crosstown is elevated, and at some points, the elevation is as much as 50 feet (15.2 m). In an August 2007 poll sponsored by The Oklahoman, nearly ⅔ of respondents indicated that they were “afraid to drive across the Crosstown bridge in Oklahoma City”.

The new $670 million I-40 Crosstown is designed to carry 173,000 vehicles daily on five lanes in each direction. A planned multi-lane boulevard offering a connection to downtown Oklahoma City will further increase traffic capacity in the area.

When the Old Crosstown closed, we knew we needed to capture this once grand highway and document it before it becomes just a memory. Enjoy!
Gallery Below

It is gone now and the new ones are starting to weather. In 20 years or less they will have to be replaced due to lack of even basic maintenance. Look at the 244 bridges in Tulsa? Stupid Stupid Stupid!!!

[…] IIRC, just to create an HOV lane, it takes 2-3 lanes to configure; then, there's the personnel needed to monitor those lanes and remove those concrete block barriers daily to adjust to the traffic flow needs used to make the process work for the rush–not to mention what happens if someone's vehicle stalled in that lane. The traffic concerns in Dallas is an example of interchange constipation. Just don't see an immediate need for an HOV (High Occupancy Vehicle) lane in OKC or Tulsa for that matter. Our traffic doesn't mimic the congestion in a mega market like Dallas'… Read more »

I-40 Fight Among Friends | FriendlyMic Films

[…] Find More pictures that we took on AbandonedOK […]

Been across that strip of higway many many times. Since I was a kid growing up in Warr Acres in the 60's. I wanted to get up there and get some pics after it closed, but was never able to. You some shots I wanted to get in the same locations I wanted to take them. … I'm glad you got them. You've recorded a big piece of this city's history that is now gone.

man.. used that Classen exit weekly! the new crosstown doesn't even have a classen exit!
ya know I'm all for the new crosstown, and I love it, but man… seeing these pictures really made me realize that it's ACTUALLY not gonna be there anymore. this bridge has been such an important part of the OKC horizon for so many years. the strange puzzle that is the OKC skyline will forever be missing a piece.

I grew up an hour north of OKC and I remember going down this I-40 crosstown when we'd take trips to OKC. I went to OKC a few years ago before my husband and I got married to visit a friend of mine. We went downtown and I remember seeing the old crosstown.

I remember when the Crosstown was opened back in the 60s. It was a wonder then (to a 9 year old). The last time I drove across it (visiting in 2007), I knew its days were numbered. Pity, that.

In about 1999, the head of ODOT bridge division, one of the most respected bridge engineers in the nation employed by a state agency according to the American Association of State Highway and Transportation Officials, told me that, in fact, the original Crosstown was structurally sound. It was actually a relatively young structure, he said — "but, like everything else in this state, it has never gotten any maintenance." "It needs to be redecked," he said — noting that it could be redecked with modern materials not available when it was originally created to be better than it ever was… Read more »

I suspect that upon actually experiencing the very disappointing "New Crosstown," downtowners felt like they'd just had another "new County Jail" experience. Far over cost estimates. Less downtown access. Fouled-up the north south snow routes with its steep bridges. And unlike Stan Draper's "highway in the sky," no view of downtown — at all. And prospective maintenance costs? Likely about what might be expected of any such structure built over an "alluvial plain" (that's an "old riverbed…") I've noted the quiet spiriting-away of 'ol Stan's statue from Civic Center Park. The one with him holding the rolled-up blueprints to his… Read more »

The contractor is bring down this eyesore rapidly.

Eyesore is a very harsh word, my friend!

That would make a cool place to film a movie. It just looks so post-apocalypse.

the first week after it closed, me and a friend just decided to go up there for lunch…we didn't ask anybody, but i'm guessing you might want to? about a week after we went up there they opened it to the public.

These are awesome. I was there on the day it was opened for one last good-bye and got lots of good photos. I have one of the chair, too, but it was sitting by the side of the road.

Wow these pics are awesome! I found a video on youtube that led me here!


They made this film on I-40 when it was abandoned as well! It was awesome!

Thanks for the tour of I-40 crosstown. I was born and raised in OKC and the photos brought back so many memories of the thousands of trips I made across that stretch of highway. I've lived in TX since 1974 so it's been a while since I crossed the city using that road! I lived in northwest Oklahoma City (near 39th and Meridian) and my boyfriend lived in Del City…diagonally across the city….he and I burned up that road going to and from each others houses. That was in 1971….so it was fairly new (opened in 1966) and safe! The… Read more »

Was that a iPhone in that one picture?

HAHA Yes it is! lol. I think it has a crack on the screen, not sure though…

I only had an hour (took longer) clocked out for a long lunch. Here's mine the day they opened it up to the public.
http://www.flickr.com/photos/williamhider/sets/72…

Did you have to talk to anyone to get up there? I would love to go take some photos (I'm a huge infrastructure geek) but I don't want to get arrested.

If you PM me on facebook I can tell you who to talk to… Just click the photographer FriendlyMic at the top or in this comment to find me!