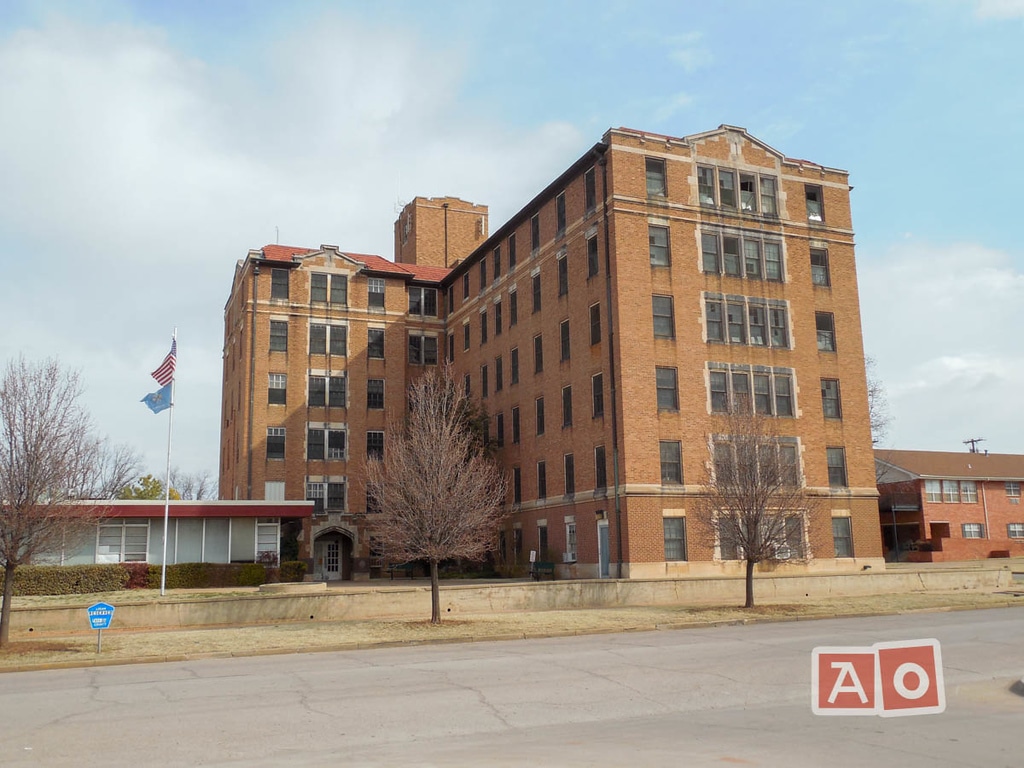 Masonic Home For the Aged 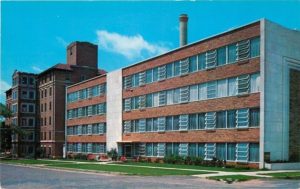 Completed on October 12, 1926, the Masonic Home For the Aged was a six-story brick L-shaped building. The architects were credited as Hawk & Parr and Campbell & Price being the builders. The main entrance located on the south side of the short leg has a portico leading to the double wood doors that each contains 12 panes of glass. The Masonic symbol is laid in tile at the base of the entrance and the double marble cornerstones set into each side of the portico. The architects, builders and the 9 building commissioners are credited on one of the cornerstones. On the east side of the building, a projected room on each floor contains a sitting area with three walls of windows. The hospital facilities were located on the fifth and sixth floors with at least 15 staff on duty 24 hours a day. After two years of being open, the name was changed to Charles L. Reeder Dormitory. In 1955, the Masonic Home annexed a four-story building costing $500,000 beside the original Home, connected by a covered walkway, to allow for more residents. A 65 by 80-foot recreation hall adjoined to the present home and on the third floor of the new addition was the dining room while the rest of the floors were used as patient rooms.

It was decided that the elderly and children should live in separate homes and that is why the Masonic Home For the Aged was built in the first place. Here is an entry found in the records of the Masonic Charity, dated 1925 when the aged were housed in the same facility as the orphans:
“After commenting on how well the children in the Home are doing in Guthrie, Grand Master Henry S. Johnston commented on the importance of establishing a separate Home for the Aged rather than continuing to house the two populations together.

“The old people must be gotten out of the Home. Elderly men smoke and chew and swear and old men and elderly men and elderly women both grouch and complain, and the very playfulness which makes a boy the delight of a parent, the sunbeam of a home, renders him an object of aversion to some elderly persons who are not related to the boy or interested in him, especially when his noise and play clashes with their past habits of life or the condition of nerves of the elderly person.” 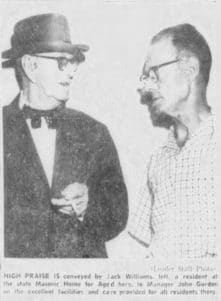 By 1927, just a year after being built, thirty-seven residents moved into the Masonic Home For the Aged. The Home grew quickly, with 88 residents living in its facility by 1931. After the second building was added on in 1955 a total of 107 residents were living between the two buildings.

Jack Williams became a resident of the facility on November 3, 1955, he made a declaration of how great the Home was in a local newspaper.

“I just can’t say enough nice things about the home, and the treatment all of the residents get from John Gordon the manager, his wife, and all of the personnel. Everyone is simply wonderful including the doctor Mrs. Mamie Compton, head nurse, and the nursing staff in providing treatment and looking after the other needs of the residents. I have found it a wonderful place to live and can’t praise it too highly.”

A new Home was constructed on the west side of town in 1976 and 78 residents moved to that new location in 1978. The Masonic Home For the Aged closed and in 1995 the Masonic Charity donated the six-story building to the Logan County Commissioners Office but continues to sit vacant. As for the four-story add on it is now Ash Street Place an assisted living facility.

It is on the corner of Harrison and Ash. My mom used to work at the “Annex” which is now Ash Street Place. It is a beautiful building, I wish someone would do something with it.