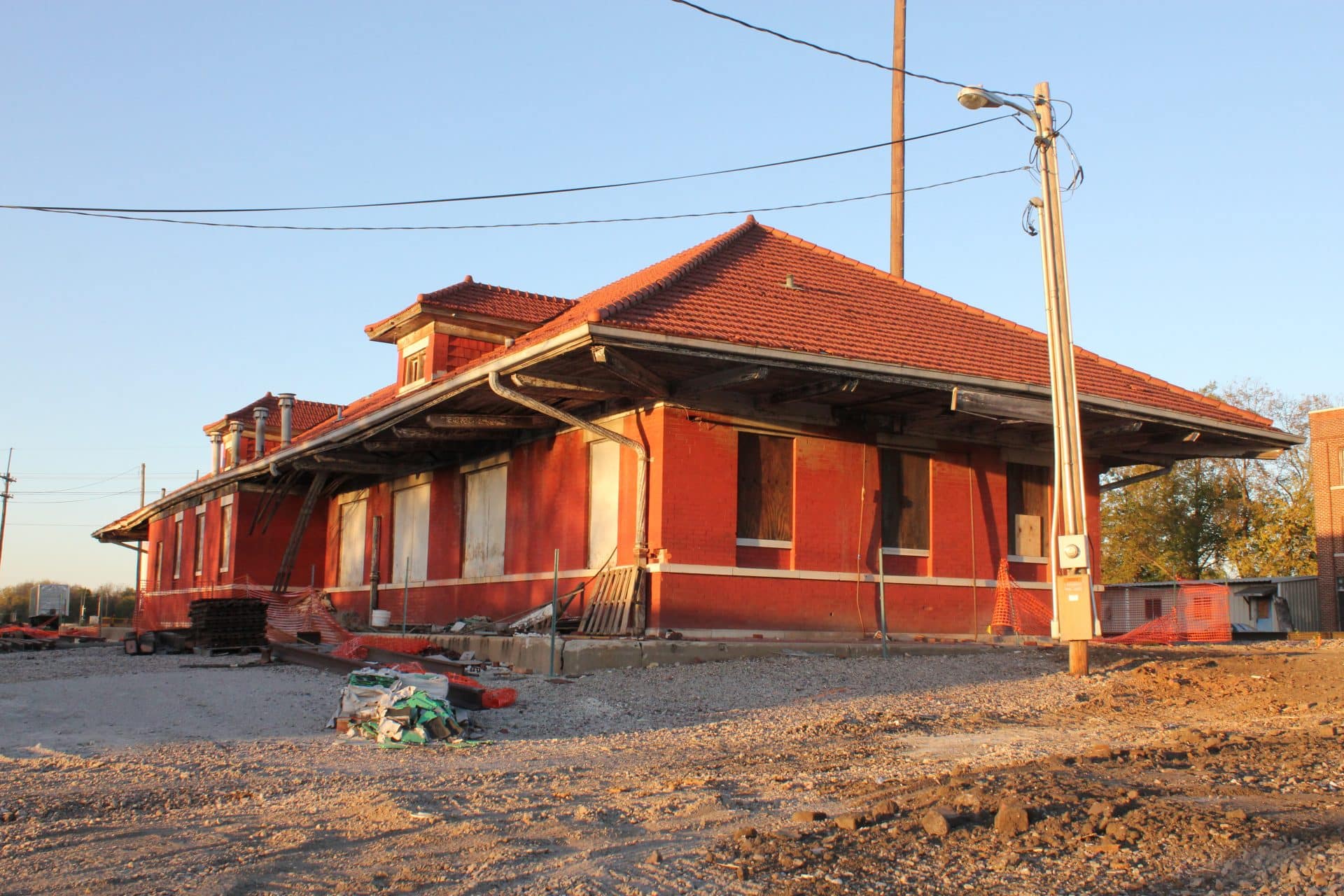 During the early 1900s, the St. Louis – San Francisco Railway had made its way through the bustling town of Okmulgee Oklahoma. It was quickly determined that the construction of a Frisco passenger depot was of order during a January council meeting with Mayor Bell and Supt. Tyler of the Frisco. In October 1910 the plans started taking form, materials had finally been shipped for the new depot on east sixth street with engineers and contractors immediately got to work on constructing the foundation. The brand new depot opened for passengers on April 16, 1911 and was built of bright orange-red brick with terra cotta shingles.

Most depots experienced a handful of unfortunate events that usually came with the territory as criminals used the trains to get from one town to the next. In September 1933 a gentleman by the name of Cyrus Easlick was held as a federal prisoner in the county jail under $2,500 bond for allegedly having stolen a parcel post package from the platform at the Okmulgee Frisco Passenger Depot. Easlick was arraigned before T.F. Shackelford, U.S. Commissioner. After pleading guilty he was held for trial in the US District Court of Muskogee.

But in addition, many great memories and events were made at these depots, meeting family members at the depot, going on trips and more. In 1929 a parade was held in Okmulgee for the one-millionth Frigidaire electric refrigerator manufactured. The parade started at the freight depot moving to the passenger depot and then heading west through the business district. The millionth Frigidaire was put on display on a stage and had been making its way across the country. And in 1941 a hundred and forty Frisco employees from Henryetta and Okmulgee with their families threw their Christmas party at the Okmulgee Passenger Depot. A 10-foot Christmas tree strung with 100 colored lights and other decorations made the depot a holly jolly oasis.

Unfortunately, the Frisco line started to diminish in the 1950s-70s and most of the passenger depots became abandoned as traveling by train became more scarce. The building went abandoned and sat unoccupied for decades becoming more and more derelict. During the 2000s Okmulgee underwent a Main Street renovation with the depot on its list of buildings to be saved. Citizens even rallied together creating a group that preached “Save Our Depot”. But unfortunately, all these plans were derailed in 2013. LaDana Huffman Kennedy awoke one morning in September to hear construction crews hacking away at the neglected building. The railroad company had submitted an application for demolition and was “reluctantly” approved by the Okmulgee Historic Preservation Commission on August 20. Ark Wrecking Company of Oklahoma was hired to bring in equipment and knock the century-old building brick by brick.

LaDana Huffman Kennedy grew up across the street from the depot in the Hotel Sparks, known as Hotel Huffman during her time there. The hotel had welcomed passengers fresh off the train with a place to stay for more than half a century. “I really thought they were going to redo it,” she said. “It’s a historical thing. There are just so many memories growing up here. We hardly have anything left to represent us like that. I am sad to see it go; I really am.”

Paul Brown, former KOKL broadcaster, shared one of his fondest memories from 1955, “My daddy took off work to take me to the depot to see the last of the Okmulgee Northern’s steam engines come through named Charley. He was being pulled by diesel and taken to Texas to be scrapped. Another steam engine named Tommy was parked on a siding over at Holleman’s Iron and Metal. Mr. Holleman offered to sell Tommy for $1,800 (the value in weight) but Tommy sat there for a long time. Then all the sudden they brought a switcher in and took Tommy off, we figured he went to scrap. However, Tommy is still alive, he’s in Sedalia, Missouri, at a museum up there. He is now worth $500,000 if you want to buy him! Tommy and Charley came to us from the Balwin Railroad Company that built the engines for Brazil. But because of the war coming up they retained them and the Okmulgee Northern bought them.”

Gallery Below of Okmulgee Depot

Awesome work! Thank you for sharing!