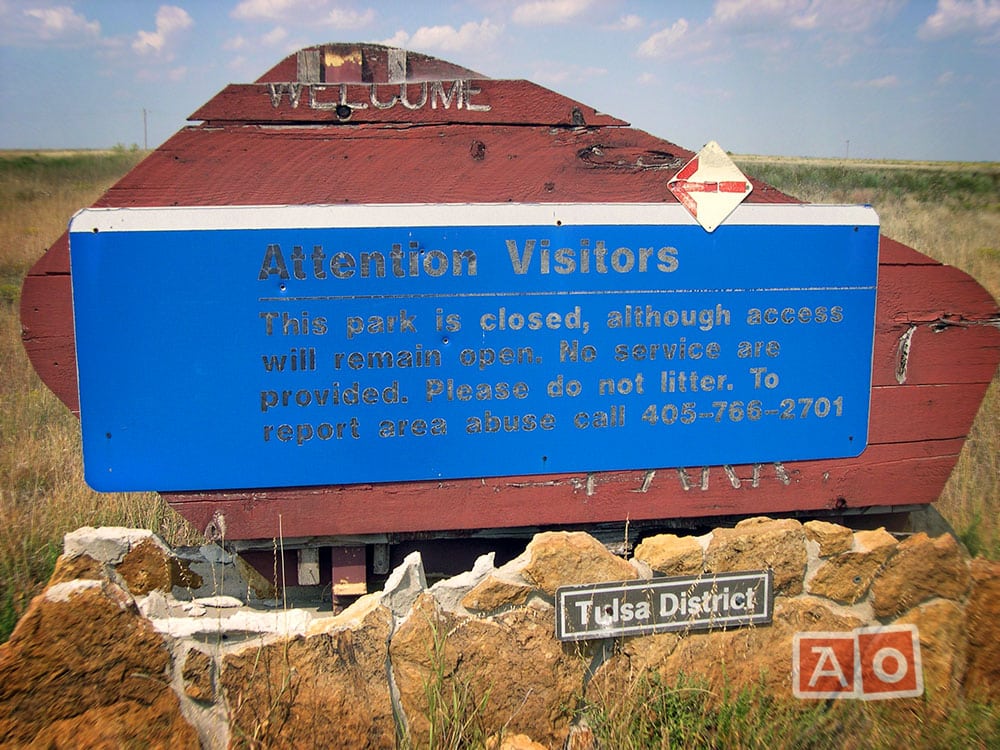 To begin the story of Optima Lake, I would like to give a little background.

I saw a story on News 9, which can be read here stating the park would be torn down instead of replacing a $1.5 Million guardrail that protects drivers crossing the dam. So we decided to hit the road, and document the park before it was lost forever.

Optima Lake is located in the panhandle of Oklahoma in Texas County on the Beaver River, approximately 4 1/2 miles northeast of Hardesty, and 20 miles east of Guymon. All public use areas around the lake are grown over and hardly accessible to vehicles, but remain open without any services like water or electricity. The lake was built in 1978 by the Army Corps of Engineers, but the water level never reached normal pool because of an extreme case of drought and evaporation in the area. This can be read about here.

There is approximately 3400 acres of land for public hunting and approximately 4300 acres of Federal Wildlife Refuge. According to the Army Corps of Engineers website, Optima Lake is also a prime area to view a variety of waterfowl, shorebirds and wading birds.

Even though there may not be any water in the lake, or any other visitors around, there is some amazing views of the valley below and the surrounding hills. The drive from Oklahoma City took 4.5 hours, but was well worth it. Next time, we’re bringing a tent!

Below is an article from the Oklahoman:

By Dawn Marks
GUYMON — Not only is Optima Lake a body without water, it also is without a campground. Angler Point, the last campground in the often-dry Panhandle lake, did not open April 1 because of budget cuts and decreased usage, said Ray Kunka, who manages Optima and Fort Supply lakes for the U.S. Army Corps of Engineers. “We really have to set our priorities,” Kunka said. The corps is facing budget cuts, which will delay several large repair projects.

The 21-site campground had been open since 1981, when the parks were completed at Optima. In 1994, the corps closed its Optima office, an overnight campground and two day-use areas. Another site was never opened because the area had few visitors. Angler Point remained open because it did not have a shower/restroom that needed the frequent attention of corps employees. When the office closed, no employees remained.

The number of visitors at the lake has always been small. The lake, built for flood control, water supply and recreation, was completed in the late 1970s but never filled to capacity. The lake was designed to hold 5,300 acres of water but never had more than 1,200 acres, Kunka said. Many theories exist as to why the lake never filled, but the corps never did an official study, he said. Possible reasons include irrigation, lack of rain and evaporation. The water was just a few inches deep over the winter, Kunka said. “It’s basically dry,” he said.

Although the lake has never been more than 15 feet deep, the corps kept the campground open for hunters, who are its most frequent users. Volunteers worked to keep the site going after the office closed. Some acted as camp hosts while others did chores such as cleaning restrooms or mowing.

The site was usually open from April 1 to Oct. 1. It earned $2,400 in user fees last summer, down from $4,800 two years ago, Kunka said. Visitors paid by depositing money in a locked box. Kunka said the campground’s operating costs have always been much higher than its earnings. The site needed a water treatment plant and maintenance such as mowing. The treatment plant also required heat and electricity to prevent frozen pipes.

Kunka said he hopes a local group will operate the site and keep it public. He said Texas County commissioners have inquired. Commissioners were unavailable for comment Thursday. Guymon Mayor Jess Nelson said the closure probably won’t affect the city much economically, but it was considered an asset. Some groups worked to increase the number of walking trails and bird sanctuaries at Optima but made little progress, he said. Nelson said the area could still play a role in the area’s future if the corps allowed the Optima Water Authority to drill wells to provide water to surrounding communities.
Gallery Below

90% of this is gone. The ranger station and maybe 5 picnic tables. No water, no people, just overgrown weeds! They did block the dam road. Sad waste of money and hardwork

On April 1 in about 1978 or 1979, the Guymon Daily Herald had an April Fool's Day edition that included a front page story about Lake Optima being filled when the fire department showed up to put out a grass fire started by a local fisherman throwing a cigarette overboard.

I foolishly loaned that copy of the paper to someone else and never saw it again.

I grew up in Hardesty having moved there from Keyes in '74. My dad was a heavy equipment operator with Guy James Construction, one of the contractors that was building Optima. I also began riding mountain bikes on the walking trails at Angler's point when they finally opened them to bicyclists. A group of guys, my wife, and me all would head out there on Saturdays or Sundays depending on when we could get together and ride the trails. I moved from the area in 97 and only got back twice once to ride at Optima and the second time… Read more »

Just thought I’d clarify a few things. I was a Park Ranger @ Optima Lake from 1979 through 1994. Number 1: There never was a “State Park” @ Optima Lake. The State of Oklahoma declined this option in the planning stages (most likely due to cost). All of the recreational facilities were managed by the Corps Of Engineers. Number 2: The Coldwater Creek “arm” of the “lake” is a National Wildlife Refuge administered by the U.S. Fish & Wildlife Service while the North Canadian (locally called the Beaver) River “arm” is run by the Oklahoma Department of Wildlife Conservation. Number… Read more »

Brent Shoulders
Reply to  Ranger B

Ranger B, i, too, am not excited about the outcome of the lake project. However, you have to admit that the area is a great place and a great asset to the panhandle. We are currently fighting a good fight with the politicians that are threatening to de-authorize the project, tear everything down, and breach the dam. The are also wanting to sell it to the highest bidder! I would like your input on a few things if you would! Anyone else interested in helping us preserve this land for public use, please go to the following facebook link: http://www.facebook.com/?ref=home#!/pages/Hardest…… Read more »

jacqueline
Reply to  Ranger B

You tell them Ranger B!

Kelly
Reply to  Ranger B

Hey B! I know you. My dad is Everett. You used to kid me about using my 79 AMC Spirit for parts for your Eagle. Not to sidetrack the issue but I was wondering how you had been.

is the dam still functional , could it still possibly fill up assuming there is a bout of rainy weather

What a cool place. And beautiful country out there. Looking at this place on sattelite imagery, it has a neat layout … what a shame.

JUST SAW IT! 8/18/2012 NOTHING LEFT BUT FOUNDATIONS, A VERY EXTENSIVE, ie, EXPENSIVE DAM AND COLLECTON TOWER. IN ITS CURRRENT STATE IT WOULD MAKE A GOOD ROAD RALLY COURSE OR MAYBE A GRAND AM FOR GO CARTS!
HAD TO GOOGLE TO FIND EXPLANATON OF WHAT HAPPENED.

So are the gates open now? In case it rains?

Ranger B
Reply to  pop

Sorry…..Haven't visited this site in quite awhile…. Gates are "open" to prevent deterioration.. Should a water "event" ever actually occur, staff from Ft. Supply lake would have to travel to Optima Lake and lower the gates using a portable trailer- mounted electrical generator. They have assured me that the gates are still functional.

It's amazing to see the parallels between what occured @ Optima Lake and what is now currently happening @ Lake Meredith in Texas Panhandle. Deju Vu!!! Same situation!

Stopped by the damn today(1/4/12). I had always been curious driving by and just had to stop. It's obviously run down but it's easy to imagine it in the past. The area is very ghost townesque! I would have thought it was built much earlier.

Any idea how hard it's hunted(deer)?

Talk about sad. My grandparents Pete and Lili Craig used to take us to go camping and fishing there in the early 80's when we would visit them in Hardesty. We even lived there for a bit. Grandpa would catch a mess of crappie of the dam. I think my older sister even worked on the construction crew that built it in the 70's.

ways to buy a house

Hi! I’ve been reading your site for some time now and finally got the bravery to go ahead and give you a shout out from New Caney Texas! Just wanted to say keep up the great job!

I worked in the office during summer break in college. So sad to see how it's been let go. Sad, sad, sad. But the land should be used for wildlife & hunters – hope the government doesn't screw it up.

I remember very well the construction of this ill conceived project and the fact that all the local landowners tried to tell the COE long before construction began that it would not work, the soils in the area will not hold water! The story about irrigation wells and such are just a flat out lie. The Beaver River has forever been known to retreat underground and resurface almost mystically and without cause or reason. Locals told the corps they would, at the very least, construct the dam to depth equal to the "red bed" if there were any chance at… Read more »

man i grew up in this area and i used to go there as a kid. some of my best memories are from visiting there with my family and i was hoping to someday take my kids but i guess thats no longer possible. its very sad that its no longer as beautiful as i remember.

I just read in the Guymon Daily Herald that the Corps of Engineers should be finished demolition of the Recreation Areas by August 15th and removal of the gates by September 15th (THAT CAN'T BE RIGHT! – Surely they don't mean the dam gates). What the….?? Only by checking the COE website did I find that the Corps announced their decision on June 15th and had a meeting here in Guymon on June 29th. I was also under the impression that the embankment roadway was to formally be passed to local county control and maintenance. With all the support that… Read more »

It's a creepy place. A sad example of greed and waste. Return the land to the former owners.

The former owners are dead now. Much of that land belonged to Ida Mae Jones who recieved a healthy compensation for it including but not limited to a brand new home and more land. I grew up in Hardesty, my dad was employed with Guy James Construction, one of the contractors that built Optima.