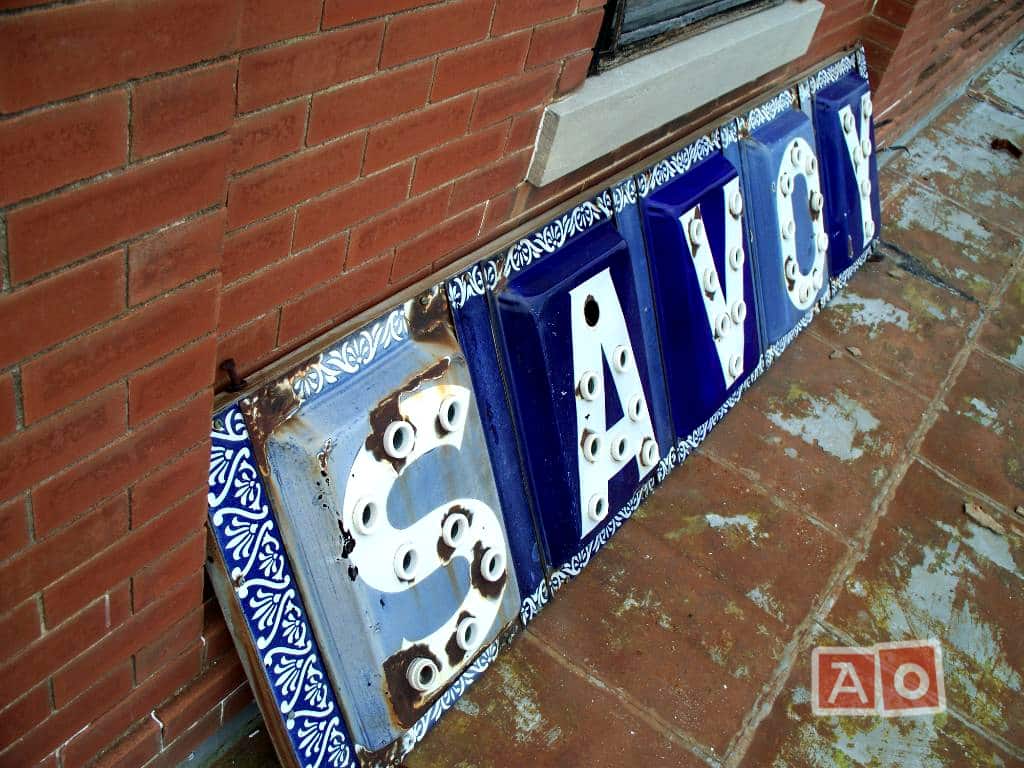 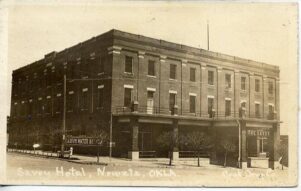 The Savoy Hotel was a magnificent grand structure for architectural standards back then and even now. Constructed in 1909 the elegant hotel boasted sixty-two rooms, a telegraph office, billiards, dining room, pantry, and a kitchen. Being as Nowata was a prominent oil boom town with a higher population turnout than most boomtowns reaching over 2,000 just before the hotel was built. This made a majority of travelers that stayed at the hotel businessmen and workers of the oil and gas industry.

Shortly after being built the patrons of the hotel created a ball team, most had experience with Eastern college teams. The Savoy was soon after sold in 1912 for a price of $85,000 to J.P. Hyatt and the general manager Floyd Dyer would retain his position. It wasn’t but a year later that the ownership changed again to J.R. Cruff after he traded J.P. Hyatt 9,000 acres of land in Texas for the hotel. It was under his ownership that the Savoy really took off, in 1915-16 when radium water was discovered from a well drilled in the town. Talks of health benefits, anti-aging properties and other advantages circulated the town. It was announced that if the citizens could raise $2,000 the owner of the Savoy Hotel would turn the establishment into a bathhouse. The bathhouse had the latest and most modern apparatus with bathing experts in charge. The mineral baths could allegedly heal rheumatism, stomach trouble, malaria, nervous trouble, and skin diseases.

In the 1920s the building fell into multiple hands, including Messrs A.A. and Henry K. Then onto F.E. Crandall who was responsible for giving the hotel $15,000 worth of refurnishing and decorations. Onto N.O. Tate in 1925 who installed 16 & 8-inch electric fans in the dining area. For a short period in the 1940s, the third floor of the Savoy Hotel was used as a temporary hospital during the ongoing battle to have their own county hospital built, the enterprise ended in 1946.

Throughout its life as a functioning establishment, it was bought, sold, and renovated numerous times. Unfortunately with the declining population and tourism of the town, the hotel was officially abandoned in the early-mid 2000s. The most recent go at renovating the defunct hotel being around 2009 when the ‘Save the Savoy!’ was launched by the owner Jay Mitchell. A lot of work had gone into constructing an entire new roof on the building but tragedy struck the project when a lone construction worker fell 40 feet from the roof. He was discovered by a passerby and taken to a local hospital where he was pronounced dead. A lawsuit was later filed for $75,000 in damages by the deceased family. Since then work has not been done on the historic hotel leaving it to sit and deteriorate.

Gallery Below of The Savoy Hotel

Will love to add this to a place to visit. – Check us out!

So what’s going on with the building in 2022 ?
Is it just going to fall down, or be a decrepit eyesore until it does ?
Does anyone even own it, or is it county property for taxes ?

My companion's grandparents in-law used to claim this building. My companion and her better half had two flats there, the main transitory while they arranged the other. The proprietors additionally lived in a loft there. They were all on the second floor. We ventured up to the third floor once, even in 2002 it was a dubious place. I trust the last time I remained there was in 2003

I was born in the Savoy. The West half of the 2nd floor were apts and the East half was the hospital. Mom walked down the hall to the hospital and I was delivered by Dr Kiefer Davis on May 6, 1942. In 1947, we moved back to Nowata from Alluwe to 114 E Modoc St, and I started grade school in 1948.

My grandfather was Dr. Kieffer Davis, and my father was also born there in 1944. We just stopped to look at the building. It's a shame someone isn't willing to renovate this beautiful building.

I had no idea Dr Davis had a son 2 yrs younger than me. We moved to Tulsa in Nov 1050 when I was in the 3rd grade, so your Dad would have just started the 1st. My teachers were 1st grade – Miss Dunn, 2nd – Mrs Richardson, and 3rd – Miss Zona McCracken. Your Grandfather also treated my Mom for poison ivy when she was in HS in Alluwe, in his office over the Rainbow Theater in the late 30's.

I really loved this article! It gave me some new insights I never really thought about before.

Only a side note and cautioning: The 2 upper floors are exceptionally temperamental and not alright to explore because of water harm. We were exceptionally careful and didnt even get the opportunity to look at the third floor. If it's not too much trouble be cautious on the off chance that you attemt to enter this bldg.

Then again you can simply make the most of our pics right here!

hats amazing…. i will make plan for next month… really wanna see these things

who built the Savoy?

if i wanted my crew to go ghost hunting at the Savoy, whom would I contact?

I am the new owner of the property. This year has been a turning point in the situation with the Savoy Hotel. We have just completed the new roof on most of the building. The building sustained tremendous damage over the last 20 years because the roof should have been replaced long ago. It took a lot planning and some brave workers to build a whole new roof on it. Now we are working on bracing the interior and we will be renovating the building back to its condition when new. Every detail will be carefully restored. This is not… Read more »

Maybe an interesting story for RSU Public TV. They like telling history in Green country 918-343-7649

hello my name is Tiny West, I have lived in Delaware all my life and I have always found myself in Nowata at least once a day as long as I can remember, sadly I have never even looked in a window of the awesome ol building, but it would be my pleasure to help with a bit of the restoration of such a great building. I soon will take on a sad task of removing an old building from a property in Kansas, and reclaiming a lot of the old flooring, wood molding and fixtures and would be glad… Read more »

My friend's grandparents in-law used to own this building. My friend and her husband had two apartments there, the first temporary while they prepared the other. The owners also lived in an apartment there. They were all on the second floor. We did venture up to the third floor once, even back in 2002 it was a tricky place. I believe the last time I stayed there was in 2003.

Per the Nowata Star this building has been sold …