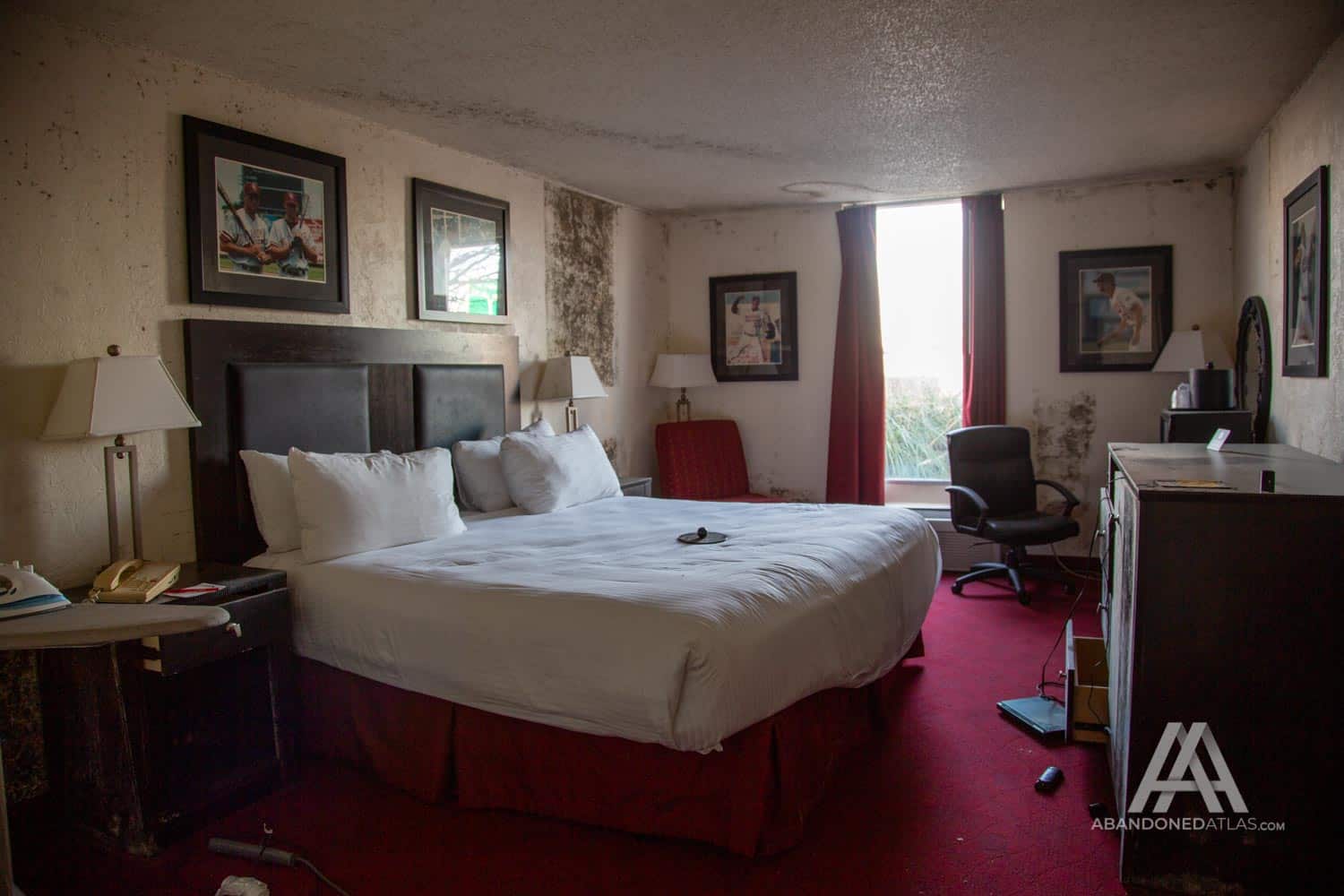 Sometimes the unique walls, curvatures and foundation of a building aren’t all that make it unique. Often, it’s what lies beneath the roof in the halls, lining the walls and countertops, and the Sooner Legends Inn is a perfect example of buildings soul being about the people and the history who inhabited it. Many people stayed in the small hotel that was just off I-35 in the college town of Norman Oklahoma, ranging from athletes, to coaches, to super-fans. All these people had one thing in common, they loved OU sports. The love of the game and the treasure trove of memorabilia made the Sooner Legends Inn a one-of-a-kind experience.

Originally built in 1971 as the Ramada Inn hotel, the Sooner Legends Inn was conceptualized by Doug Kennon, the owner of Bob’s Bar-B-Q that was housed inside the hotel. In 2006 Kennon was given the keys to the hotel and that’s when he turned it into the Sooner Legends Inn. The almost 80,000 square-foot building was known for its themed rooms with various legends of the OU athletics programs making appearances on the photographs and posters spread across the walls. The hotel drew in some big name athletes including former OU Oklahoma football and NFL player, Tommie Harris.

Harris used to work at Bob’s Bar-B-Q before the hotel became Sooner Legends and he quickly formed a close relationship with Kennon. The memorabilia that Kennon had collected was gathered over his entire lifetime and he accrued over 20,000 pieces of OU memorabilia. The relationships that were formed in the hotel were what made the foundation so strong and have left a lasting legacy in the town of Norman Oklahoma.

Sadly it was announced in the summer of 2020 that after a nearly 20 year run the hotel would be closing its doors for good. There were several major factors in the decision to close the hotel. One was that in the 14 years since the hotel opened under its new name over 100 hotels had cropped up in a less than 40 mile radius. Another factor was during 2016-18 when Lindsey Street was under construction to make it wider. The construction felt like it was much longer than two years and it hurt many local business’ in the area. The final nail in the coffin was the start of the covid-19 pandemic, the hotel took a major hit in cancellations and a lack of reservations. All of these things contributed to the property being sold in an auction for over 2.5 million dollars.

The hotel that celebrated OU athletics was demolished in (insert date). Before that day it sat abandoned, in a town that loved OU sports, thousands of memorabilia remained untouched and unmoved in the quiet halls of the Sooner Legends Inn. There were paintings, posters and pictures of legends all over the walls. Various awards from throughout the years were stationed in different rooms. The beds were still made as if waiting for one more customer to lie down and take residence for the evening. The heart of the hotel was still beating even though it was empty and alone.

Unique and impressionable architecture are not all that make up a building and its history. The people who built it, frequent it, sleep in it, eat in it and live in it are what make the memories that live on in people’s hearts long after the walls are nothing but dust and rubble. The OU athletics program is a behemoth that has shaped Norman Oklahoma into the town it is today and the Sooner Legends Inn was a special tribute to all the athletes, coaches, trainers and people of Norman that wrote a page in its history. That is the mark that Kennon and everyone who put their time and money into the Sooner Legends Inn and Bob’s Bar-B-Q left behind, and even though the building may be gone, the legacy left behind will be legendary.

Gallery Below of Sooner Legends Inn

It is a travesty what closing down Lindsey street did to these businesses. It is also abject failure on part to have never stayed there even tough I live in Norman. I thought this concept was outstanding. We all took it for granted. Shame on us.