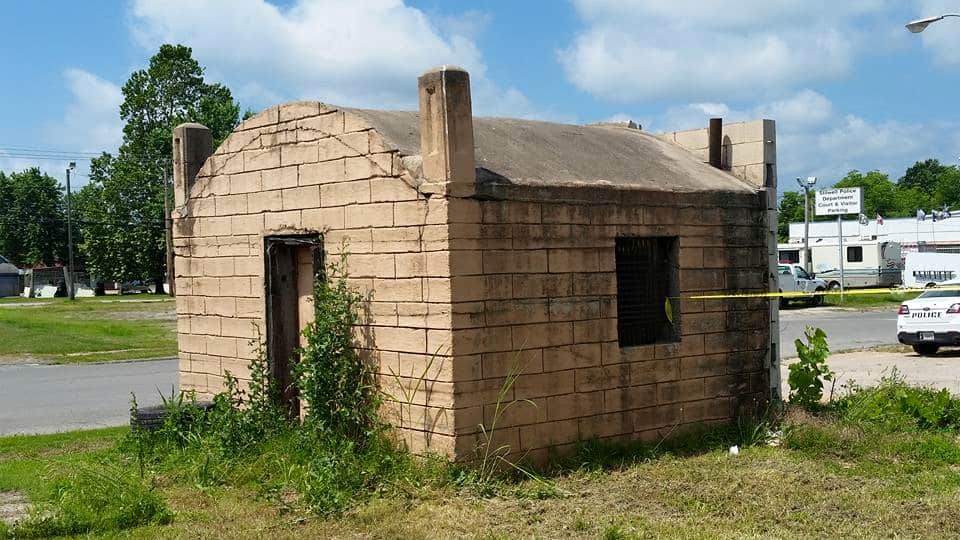 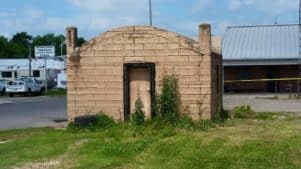 The small cowboy jail of Stilwell’s history dates back to the early 1910s. While the exact date of its construction was sometime between 1910-1914, it first showed up on existing fire insurance maps in 1914. It was a barrel-roofed cell with large blocks making up the thick walls. Some stories involving the jail and its patrons from local newspapers are included:

The Oklahoma City Times Jan 25, 1921 – Mrs. Charles Eden was perhaps fatally shot and three other members of the family, including her husband, were wounded when Deputy Sheriff Smith and three other men he had deputized attempted to arrest them at their home near Odell thirty miles north of Fort Smith, AR. The men are alleged to have escaped jail at Stilwell, OK and are charged with a number of burglaries, Deputy Smith declared. When Smith and his assistants located the house in the timber the Edens refused to surrender and a battle ensued, every member of the Eden family being wounded.

The Bigheart Times Oct 20, 1921 – A man giving his name as Hensen, wanted at Stillwell for jailbreaking, was taken in tow Sunday evening by Officers Willis and Williams and turned over to the Stilwell officers. A reward of $25.00 was paid to the local officers for their prisoner.

The Oklahoma News Apr 12, 1938 – A full-blooded Cherokee Indian World War veteran was beaten brutally by Stilwell officers who arrested him on a charge of drunkenness several weeks ago. Mrs. Mabel Bassett, state commissioner of charities and correction charged today. Charges may be filed against the officers she said. The Indian, Sam Doublehead, 43, father of nine children, argued with the arresting officer, who clubbed him with a revolver according to Elsie B. Hand, an investigator for Mrs. Bassett.

He was lodged overnight in the old Stilwell jail then shifted to the county jail and later moved to the Veterans Hospital at Muskogee with a fractured skull and paralyzed right side, Mrs. Hand said. She ordered the old jail closed. Mayor R.B. Worsham of Stilwell reached by telephone said Doublehead was arrested by an Adair County Deputy Sheriff. A.A. Hart, the county jailer, declared however that two city officers named Dee Delma and Charley Bassinger made the arrest. The council of the Five Civilized Tribes at Muskogee has ordered an investigation of the case. Doublehead is now at his farm five miles south of Stilwell in critical condition.

On February 12, 2021 the City of Stilwell tore down its former jail after inspectors deemed it a hazard to public safety.

Emily, did you ever come across any historic names of old schools in Stilwell that are not in use today. 1920’s stuff.