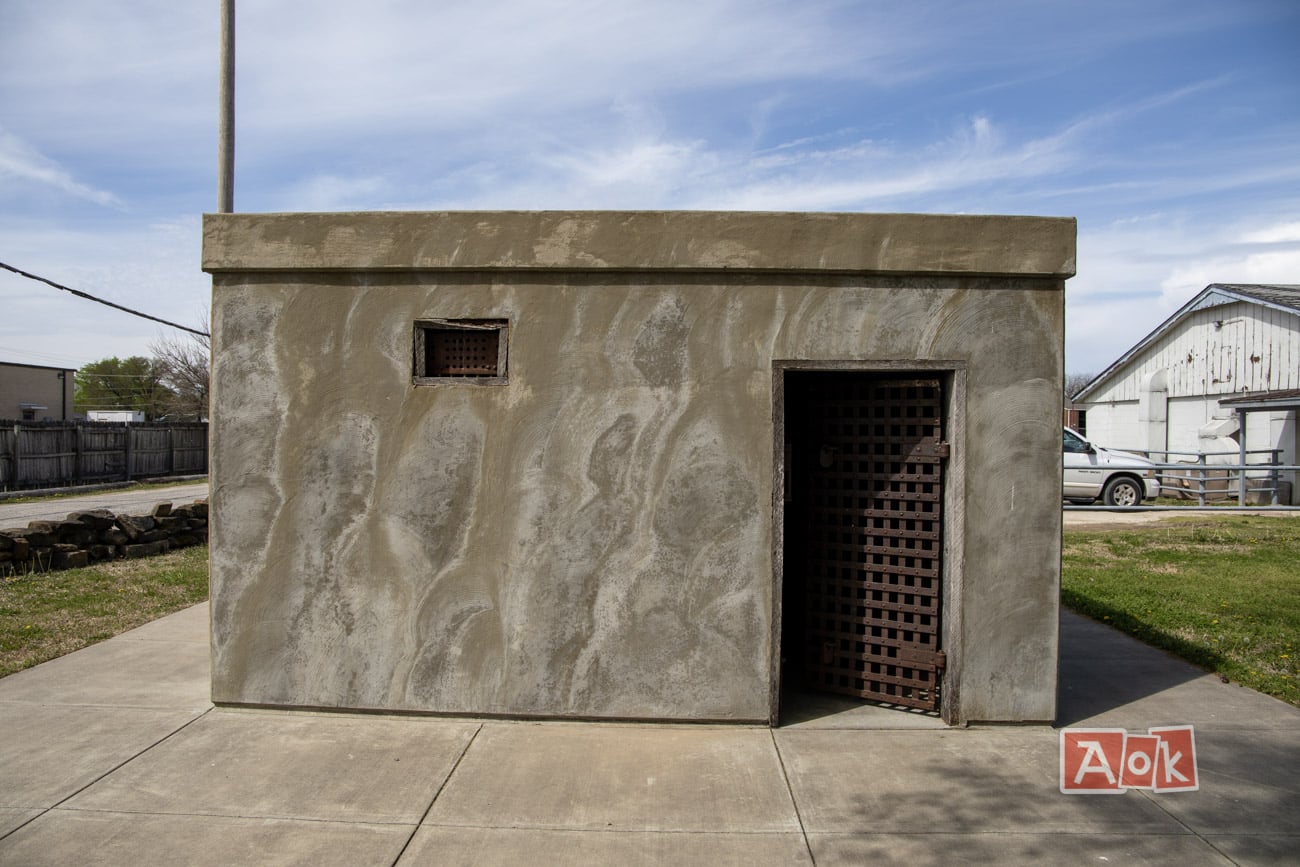 For decades this two-room jail was known as the Dewey city jail, today it is more popularly known as the ‘Tom Mix Jail’. In 1912, before Tom Mix became a huge silent movie star he was the Dewey Town Marshal and this was his jail. The jail pictured in the gallery below is a reconstruction of the original concrete jail that sat just 400 feet away. The original jail sat at 801 N. Cherokee and was constructed by J.H. Montgomery with the iron doors being made by the Dewey Machine Company. Many newspaper stories came out of this jail included below:

Morning Examiner Sept. 7, 1910 – Yeggmen, (someone who breaks open safes, a robber) two in number, evidently amateurs and doubtless the ones wanted for robbing the Nelagony depot some two weeks ago and more recently “stood off” by the station agent of Hallett when an attempt was made to tap the till there robbed the M.K. & T. depot at Wann early this morning. They escaped on the southbound passenger by catching the blind baggage only to be arrested by the City Marshal Allen, assisted by Pat Fields as they were alighting at Dewey. What they did with their booty is not known as nothing was found on their persons when taken into custody. The thieves might still be at large had it not been for the prompt action of the Wann agent in notifying the Dewey authorities. After being arrested they were taken to the Dewey jail where they refused to talk or give their names.

Morning Examiner July 9, 1912 – Wednesday night about 11:30 pm Enforcement Officer Geary arrested Pat Kennedy and a boy named Collin, about a mile north of town with a team and buggy loaded with booze. He secured 275 bottles of beer and sixty-six quarts of whiskey. The men were lodged in the Dewey jail and the booze confiscated.

Morning Examiner Sept. 30, 1917 – George Longbone occupied a cell again in Dewey jail yesterday. He had been arrested for drunkenness, got away and was caught by Officer Poleson at Bartlesville. His wife and father visited George yesterday and tried to persuade him to cease to call John Barleycorn his friend. Mayor Ford is trying to lessen the number of cases of this kind of ten-dollar fines for first offenses, increasing the amounts for repetition.

The Bartlesville Daily Enterprise Sept. 5, 1922 – Three prominent Bartlesville young men came very naer landing behind the bars of the Dewey jail Monday night as a result of annoying three young women in a Ford sedan. According to the women, who had the young men places under arrest at Dewey, they were driving towards Dewey when when a Ford coupe in which the three youths were riding approached from the rear. The youths honked their horn and passed the sedan. They then slowed their car down and attempted to start a flirtation with the women. The women told the Dewey authorities that the boys annoyed them all the way to Dewey. The youths denied the charge and the women were told the authorities did not care to prosecute them. They simply asked that they cease annoying the women and were released.

Morning Examiner Aug 14, 1946 – Charges of being drunk in a public place and escaping from jail were being prepared in the county attorney’s office yesterday afternoon against Curtis Holland of Dewey, who was arrested yesterday morning by sheriffs force members following his escape from the Dewey City Jail. Holland was arrested at his fathers home in Dewey shortly after his escape from the Dewey jail the officers said. Sheriff Tom Sears said Holland had been placed in the Dewey jail during the night on a drunk charge. He apparently escaped at about 6am when the jailers were changing shifts. A bolt had been taken off the jail door hing allowing it to be sprung outward far enough for a man to squeeze through.

Bartlesville Examiner-Enterprise March 8, 1957 – The honor system really worked on one city jail prisoner Thursday. Jailed for drunkenness the prisoner requested permission Thursday to work out a $20 fine. After working a little while the prisoner decided work was for the birds and he went to Bartlesville for a beer. After some reflection he decided to turn himself in so he went to the Sheriffs office where Dewey police went to get him. Thursday evening he was back at work cleaning the city hall building.

In 2013 the run down jail was sought to be rebuilt by preservationists when news that the building would be scrapped started to circulate. The jail was deconstructed and rebuilt 400 feet away using the origing doors and window bars. The project was originally estimated to cost around $20,000, but thanks to donations from private companies, as well as the City of Dewey, the actual out-of-pocket cost was closer to $1,000. Local business and people that donated time, money and materials include; Bartlesville Redi-Mix, Hughes Lumber Co., Kenneth & Marilyn Tate, John & Carol Orloski, Esteban Vargas III, the City of Dewey, the Washington County Historical Society, and the Tom Mix Museum.
Reconstruction pictures were taken by Washington County Historical Society
Gallery Below