Driving down Old Highway 75 now it’s easy to miss the once-bustling and teeming with life, Town of Vera. First established in 1889 as ‘Evans’ the name was changed just a decade later on Nov 1, 1899. The railroad coming through was what put Vera on the map making it the biggest town around at the time. The Trading Post of Vera was one of the earliest businesses, established before the railroad. Owned by Eli Carr, The Post was also home to the original Post Office established on Dec. 15, 1899. The town consisted of a depot, grocery stores, clothing, and hardware stores something for all your needs. There were around 7 hay barns, a few cafes and even a movie house owned by C.B. Brown, silent movies were screened and often times a piano would be played during. The Hadley brothers had two businesses to serve the town; one was a general merchandise store and the other a hardware store. Later, both stores were converted into school activities and classroom buildings. 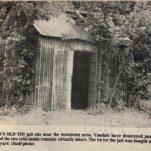 Mr. Carr donated a small bit of land just 135 by 82 feet, just off of Main Street to build a jail. Tin and timber gathered from J.W. Chandler and Son Lumber Yard, the only lumber yard in town at the time. The materials were used to construct the outer building that enclosed the steel barred cage inside. Finished in 1906, it was fitted with two cells and two beds. This was a popular style of calaboose before the concrete pour-in-place method became popular after 1910. Metal scrappers and vandals stole the beds out of both cells so it was decided to move the jail in 1990-1991 behind town hall to help preserve one of the last historic buildings left in the town. There was a proposal to add the jail to the National Registry of Historic Places but was denied since it had been moved from its original site. It is still there behind Town Hall and accessible to go inside and take pictures.

The first classes were held in the back of a blacksmith shop in Mcfall, organized by Mr. John Disch from 1889-1900. This was a subscription school but records of teachers and costs were lost in time.  In 1900 materials were donated and volunteers built two new school buildings. Pupils attended classes in the Latter Day Saints Church while construction was underway. Once finished Hugh Watson, the first mayor of Vera served as a teacher in the schools. But a short decade later both frame buildings were sold and moved; one to Bill Heindselman and turned into a private residence, the other to C. B. Brown and turned into a residence and office space for his Mill.

In the summer of 1910 construction started on a four-room, two-story, building. This was Vera Central School, it was finished in September just before the  new school year started. Another subscription school, students paid $1.00 per month to attend. It was the teachers’ responsibility for collecting the subscription fees, although some didn’t pay, more students meant bigger salaries. B.S. Hang started teaching at Central in its opening year. Ms. Cora Parsley served as a first-grade teacher in 1914. In 1925 when remodeling, the dome was removed and they converted to a flat roof. The iconic bell that sat inside the dome was moved to the back door until Vera Central was demolished in 1936, the bell was saved and now sits on a concrete slab in front of Vera Town Hall with a plaque.

1st Vera High School with Vera Central in the back left

A much bigger facility was needed to accommodate the fast-growing population and bring in more kids from surrounding farm communities. Erected in 1925, Vera High School experienced a fire just a year later in 1926. Destroying the building entirely and with it many school records. The community was relentless and rebuilt one last time where the 1925 high school sat. Construction cost was around $30,000 and was completed in 1928-29. Vera was the first school in Oklahoma to have a free lunchroom with cooks Mrs. Winnie Webb and Mrs. Ione Maxey. It paved the way for the government provided lunches in schools all across the state. In 1936, the Vera Central School that sat just behind Vera High School was torn down. There were 247 total graduates from Vera High School between 1925-1958. In 1958 the last class of 10 students walked the stage to receive their diplomas and the decision to shut down Vera High School came with a saddened community. After closing, the School District was divided into four divisions with remaining pupils going to nearby Collinsville, Skiatook, Ramona, and Talala. The building was used as a grade school for a few years after, in some later years it was demolished as well.