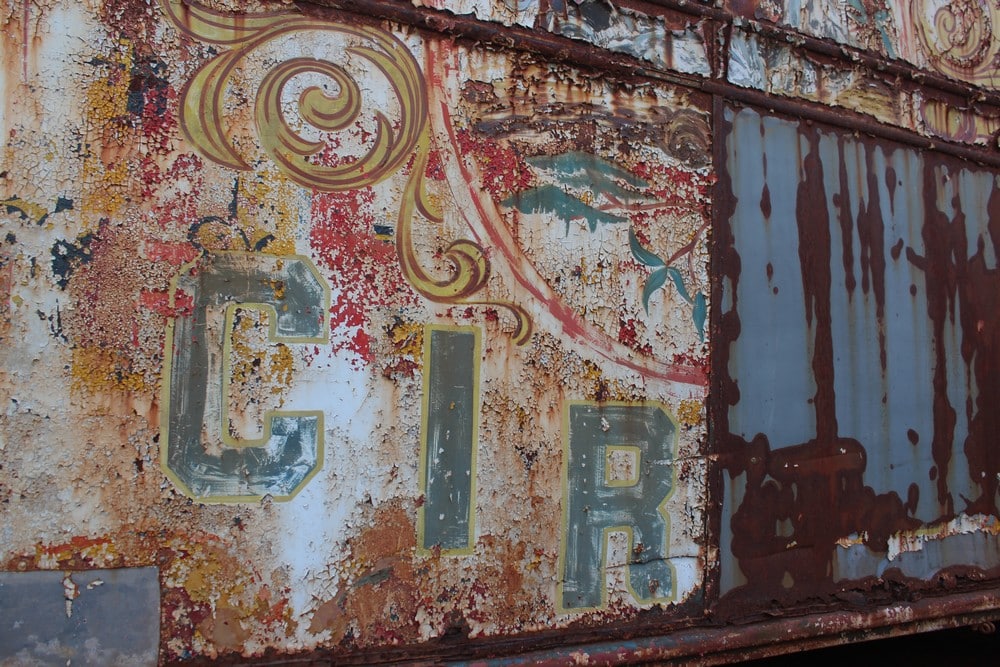 This abandoned circus went on for some time between the 1900’s and 1930, touring across various parts of the states. Fragments of the circus still linger around, including 4 or 5 trailers where the clowns, acrobats and animals were housed. Even the cages, large and small, are still there– discarded when the circus apparently disbanded. Although many of the trailers are burnt from the inside out by either arson or a terrible accident, you can still find fliers, popcorn bags and soda cups along with assorted pieces of memorabilia throughout the area.

What makes the ruins of Gandinis circus Edmond so spooky is not the place’s background, but it’s lack of obvious history. I’ve tried to search the Internet for information on the circus but could only find a few pages vaguely relating to what it was. Digging through the ashes in and around the trailers, I was able to find a few old fliers intact that shed some light on the place, but still not enough to make this area any less frightening.

The real scare comes at night, walking through this barren place, maybe tripping over an old cougar cage or deflated clown ball, when the full scope of what ‘haunted’ really boils down to. Afterall, there may be nothing more dreadful than a haunted circus burned to the ground. A place does not necessarily require ghosts to be haunted, but if it’s scary enough, maybe we’re the ones who create them.

Pulled from an article about an abandoned circus that is now offline. (Link to Web.Archive)

Highlighted comment by CIRCUS KID with more details on the Abandoned Circus:

“Gandini’s Circus couldn’t make it thru the Great Depression. The assets were bought up by Howard W. Suesz in 1943 and a new circus was formed – CLYDE BROTHER’ CIRCUS (Clyde Bros Circus). There were no Clydes. The production company operated inside (arena) and outside (tent) shows. In the late 40’s / early 50’s the tent show was called HAGEN BROTHERS (again, no Hagens).

The Hagen show played up to the early 60’s. Howard Suesz focused almost exclusively on the Shriners Organization. By the mid 50’s the circus was playing a number of Canadian Shrine dates yearly. In 1960 the Clyde Brothers Circus had to change the name of it’s Canadian show to Rex Bros.

Circus due to competition from the Clyde Beatty-Cole Bros. Circus that also played in Ontario that year. Howard Suesz had a daughter who attended OSU. She met William Jack there. They were students of Dr. Robert Lacy, the head of the Radio and Television. After they graduated, William Jack began helping his father in law run the circus. In 1969, Dr. Lacy bought a half interest in the circus. At that time, the circus had its office on Britton Road, just east of Western.

It later moved to the big White House at 63rd and Kelley. Lacy left the circus in 73 for other business ventures. From the late 60’s thru the mid 70’s Clyde Bros. Circus operated two units, the Red and the Blue and played a number of sponsored dates through Ontario, Quebec and the USA and ventured in to Mexico from time to time. In 1976 the Blue unit was the Clyde Bros. Circus and the Carden & Johnson International Circus was referred to as the Red unit.

That year the Carden & Johnson International Circus bought the Clyde Bros. Circus and it’s contracted dates. It was after that the circus left town. Lion Trainer Jose Barrada ended up with the real estate Jose and his family operated the ALCAPULCO restaurant in Edmond for a while. Jose’s oldest son Jorge, got the property from his dad. The land has been seemingly abandoned for decades.

In the early 70’s, on the property of Gandini’s Circus, there were 6 elephants, 11 lions, 7 tigers, 3 camels, 3 bears, chimps, a herd of ponies and a herd llama, and numerous domestic pets. The lion trainer, Jose Barrada lived in the house with his wife and three sons. His two oldest sons, Jorge and Chino trained the chimps and bears. Chino was also an award winning tightrope performer.

His wife had been an aerial performer. The tiger trainer, Lou Reagan lived in a trailer on premises. He also worked the elephants, camels, llamas and ponies. Other hired hands lived on premises. Two primary barns had three rings. Two in one and the tiger arena was in another. On the road, the majority of the acts were contracted for the season.”

If you plan on visiting, dont go through the neighborhood. Some man 3 houses away literally waits on his porch to call the cops on people going to see it. Hes kind of pathetic.

Someone please let me know how to access this or get ahold of the land owner. I'd love to go treasure hunting there, thank you!

The property is now currently for sale. May/2020

Wow. Just wow. Wish they had left it alone so we can reimagine it. Great story.

Went 3 months ago and although there really wasn't anything left, I managed to find a circus ticket. Pretty cool.

I went yesterday and there was an abandoned house, rain shelter, 4 trailers and a huge chunk of metal that I assume is a collapsed water tower. You have to walk through the tall grass across the field, you can see foot trails where others have been exploring. Try again.

The Circus is called Cylde bros shriner circus and the hagen bros were also there!!!! Was running in 1955 to about 70 ish!!! I can tell by the pop top RC can I found there they stopped making them in like 1973.
https://digital.library.okstate.edu/oktoday/1950s/…

Page 8 has an add for the Hagen bros circus!!!

The Clyde Bros. Circus was started in 1943 by Howard W. Suesz. By the early 1950's the show was playing a number of United States Shrine dates, and by the mid-1950s began playing a number of Canadian Shrine dates. Both indoor and tent dates were played. In 1949 Suesz started a tent show called Hagen Bros. that was operating until 1961. There was no connection to Clyde Beatty-Cole Bros. However in 1960 the Clyde Bros. Circus had to change its title to Rex Bros. Circus for it's Canadian dates due to competition from the Clyde Beatty-Cole Bros. Circus that also… Read more »

Actually, they quit making pop-top cans in the early 80s, not the early 70s.

I grew up in edmond, we could hear the lion and elephants at night. we used to sneak in the back way and watch animals and "smoke" dont thing its hauntd, just old place in middle of town…look around and you will find popcorn bags and fliers

Thank you for sharing that link! The story was fascinating!

How do I contact the owner of the property? I would love to explore this place!

I live in a neighborhood right in this area. The woods where this is Located Right Where the soccer filed

is. I can see the circus from my Roof!

circus or more recently i have heard the newer generation call it the satanic circuis … sad how even teen vandals have gone to new levles of destruction compared to back when i was a teen ….. i lived in meadow lakes and my friends lived in swan lake so it was an everyday thing to go there …… i am going to goback soon and take my boys there now that my oldest is not to small get hurt …… on a seperate note my father said that it was functional until about 1973 he also lived near and… Read more »

[…] like an abandoned circus to stir up ghost stories. Gandini’s Circus came to Edmond, Oklahoma, around 1910, but has since become a wonderfully creepy desolate field of rusting cages and […]

Ghost Stories from Every State | PEOPLE.com

[…] like an abandoned circus to stir up ghost stories. Gandini’s Circus came to Edmond, Oklahoma, around 1910, but has since become a wonderfully creepy desolate field of rusting cages and […]

my grandfather was a caretaker there in the late 60s early 70s. loved that place.

[…] Gandini’s Circus | Abandoned Oklahoma – Heading down busy Kelly Ave in downtown Edmond, passing an Arby’s and a gas station, you wouldn’t think anything of the obscure dirt road blocked off by a yellow … […]

I work for the City of Edmond and the lions, tigers, elephants and other animals were there through 1988. We had a key to the gates as we had to have access to electric lines and meters. In the early mornings you could hear the roar from the lions.

[…] traveling acrobats, clowns and animals.  They apparently trained right here in Edmond.  You can learn more about it by clicking here.  They even have pictures taken by folks much braver than […]

who do i need to contact to get permission to investigate?

I explored this place with a friend last year. Most of it has been taken down, mainly trashed out small house and burned up old touring van are what remains. It is in the middle of residential area and modern homes can be seen bordering on three sides. There were some concrete pads with rings bolted to the floor to house the elephants at one time. There were a few trailers there that are pretty destroyed as they were mostly wood originally. There is some cool painting on the sides of the trailers, there are multiple coats of paint peeling… Read more »

Does anyone know if I can take a group to explore with complete respect of the property the grounds? I lived in Edmond my entire childhood and never heard of the circus. I know where it is located but just thought it was an abandoned housing area.

I have spent the last year trying to reach someone about the property. The gentleman who the property was left to after the circus left town now lives in FL, and I believe his family now maintains the property.