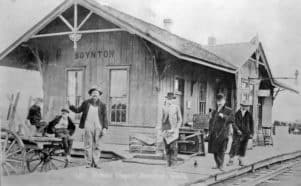 Hidden in the woods just out of sight, sits Boynton Depot at the same location since being built in 1910. Originally, a wooden building like many other Frisco Depot’s, it served as a midway stop on the Fayetteville Junction from Fayetteville, Arkansas to Muskogee, Oklahoma. Around 1926 the original wood building was rebuilt using bricks from the local Francis Vitrified Brick Company, which later became the United Brick Company. This new depot being much bigger than the first as the town’s population began to grow after the discovery of oil in the 1920s. It had a ticket office, large baggage and freight room, and then white and black waiting rooms with separate men and women’s bathrooms as well. Floor plans for the 1910 and 1926 buildings are included in the Depot Gallery below. The depot was abandoned in 1973, without the resources to preserve it in a disappearing town, it has sat for half a century. 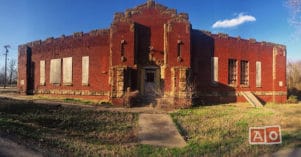 Boynton Armory is arguably the most impressive building in Boynton, it is massive in terms of character and its size. It was constructed by the WPA in 1936, to serve Boynton in military preparedness of World War 2. The armory was unique for its Northeastern location since it was made of red brick. Most in that part of the state were made of native sandstone. In its later years after its retirement as an armory, it served as a Masonic Lodge and as a gym for Boynton School District basketball games, with some classes being held there such as shop class, occasionally students were taught to develop film in a dark room, and how to mold and fire clay in kilns. 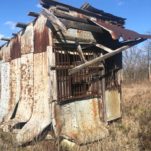 What has often been mistaken as the old jail is actually an old grocery store. Built and owned by Levi Brown who came to Boynton as a pioneering minority. He started his business and it ran as a small community grocery store its original location is not known. Approximately around in the ’40s and ’50s, the Boynton Historical Society attempted to move the small tin structure to preserve it next to the Historical Society’s headquarters but the building was severely damaged in the process. I’m hoping this clarity on the history of this business will bring new appreciation to the tiny tin building on the outskirts of town. 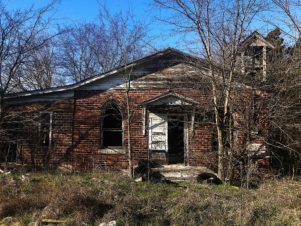 According to the cornerstone, the Allen African Methodist Episcopal Church was built in 1918 and one of the earliest churches in Boynton. It lists Geo. W. Davis, and J. A. Watley as a few of the trustees. Added onto the original cornerstone was a newer stone commemorating the rebuilding of Allen Chapel A.M.E. Church in 1966 along with the pastor’s name A.B. Ballard. The bell that one sat in the tower and announced when service was started, has been long-lost. The last service was held in the late ’90s and the building was left to be reclaimed by nature in the following years. 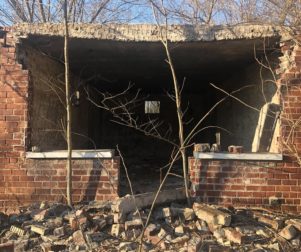 The actual jail of Boynton is off of Kenefick Ave. Not much is left of the building other than 3 of the four walls and the bars on the window. The front wall of brick looks like a bomb has gone off to knock it down and there is evidence of a fire inside at some point. This small jail was interesting compared to others I had seen being as it is a bit larger than the normal tiny jail size and that it was made of brick rather than tin, concrete, or steel. I suspect the materials came from the brick factory that Boynton was known for but couldn’t find any historical information on the jail or where the materials came from.

First Christian Church was first built as M.E. Church, by the North Methodist Congregation. Work started in November of 1905 and in February 1906 the Ladies Aid Society held a box supper fundraiser at the Boynton Schoolhouse with all proceeds going towards the seating for the new church. April 15, 1906, this date is recorded on the cornerstone that is laid by the front entrance. Unfortunately, the area below it that typically would list the leaders of the church below the date has eroded away.

In June of  1921, it was re-established as the First Christian Church of Boynton. This was one of the five churches in the town. It was the biggest church in town at the time and at just 3 months old in August 1921, the church had 50 enthusiastic God-loving members and conducted Sunday school with 75 enrolled attendees. They had a choir and had high hopes and plans of creating a church organized orchestra as well.

Galleries below of Boynton, OK

I’ll never forget my trip to boynton. my ex-step daughter and i came drove through hear on our way to her flute concernt in Tulsa. we stop at one of the gas stations in town and the sky was getting really dark, next thing I know, sirens are going off. the cute store clerk told us we could stay in their cellar until it passes. we talked for hours about our past. we were two lost soles that met. we got married 3 months, 05, later and had our honeymoon in hot springs, AR.

Now that’s what I call a happy ending!

Our town is not disappearing Ms. Emily…..as a matter of fact ppl our moving back to Boynton….peace and quit for retirees….thank u for the write up it was accurate and I enjoyed reading it….

I’m hoping to visit there one day.

Wasn’t there a great basketball player from Boynton a few years ago? How long has it been since it’s been abandoned? Is there houses with people living there still!

I played a scrimmage in that gym. One of my teammates foot went through the floor as he landed from a jump.

that must have been hilarious!

Boynton played many basketball games in the Armory building. Back then the girls played half court basketball. There were even donkey basketball games too. I worked in the concession stand during some of those games. Also a teacher had some classes in the building. Mr. Pugh taught us about developing film for pictures and he had a kiln and taught us about making and firing pottery. I remember one of our coaches was Mr. Hamm. I graduated from the old Boynton High School in 1965. Sadly that building burned in the 1970’s and the new building was 1 story. I… Read more »