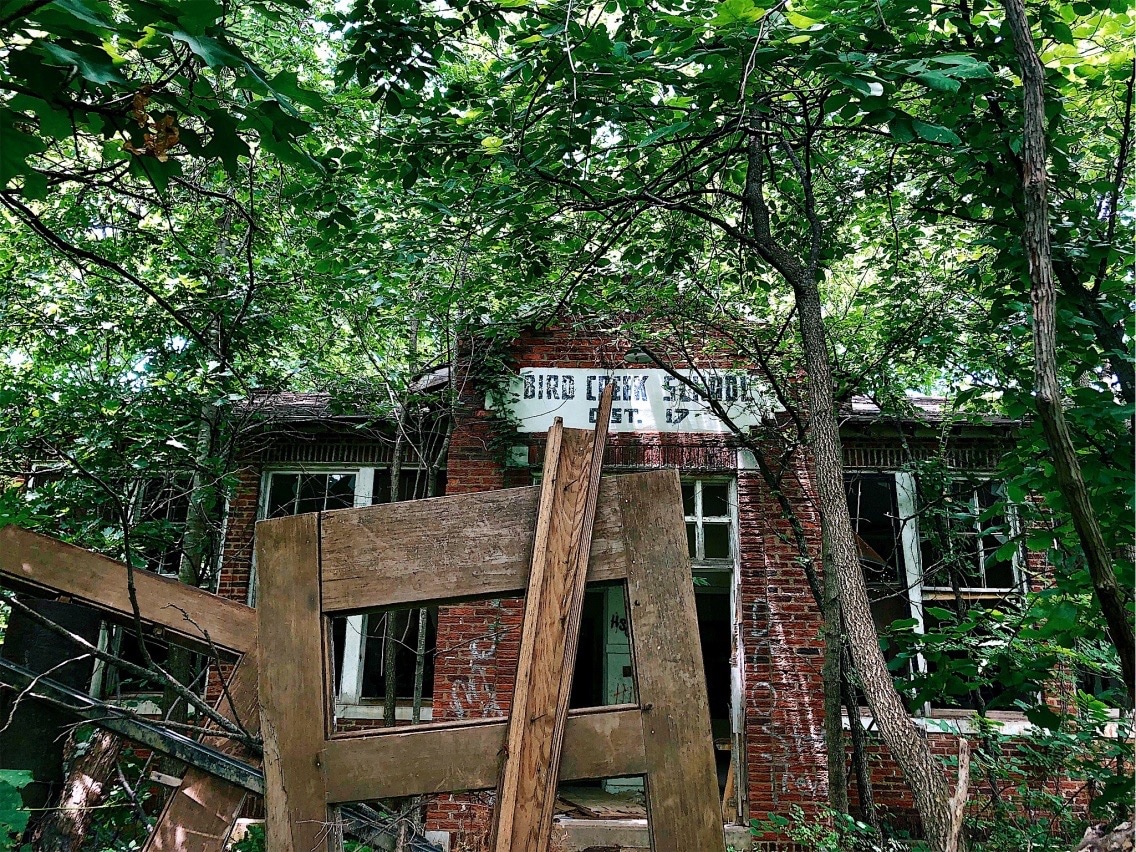 Bird Creek is a two-room school built by the WPA, construction started in 1938 and was completed in 1939. It was a small country school for District 17 that got its name from the nearby Bird Creek that runs throughout Osage County. It was significant educationally and socially being as it introduced a modern facility with advanced instructional teachings and by providing job opportunities to some of the impoverished workmen in the area. The Pawhuska Journal-Capital reported that 15 students from Bird Creek School and their teacher Mrs. T. E. Allen and several parents went on a field trip to Independence, Kansas on May 31, 1961. It was at some point in the past nominated to be an Oklahoma Landmark but was passed up. Little is known about the school to date but according to some newspapers dating back to the mid 70s’ it is assumed that it was used as a community center building after its assumed closing around the mid/late 60’s. The Bird Creek Home Demonstration Club met there often with reports of them meeting at the old school spanning from 1957-1976. The Daily Oklahoman April 24, 1979 spoke of an outdoor living camp for students in the district that would be held at the Bird Creek School where students would live off the land and study wildlife, water conservation and pollution.

The current owners acquired it from a trade by giving up dirt for the nearby landfill, and in return they were given the school which their mother happened to be a former student of.

THIS LAND IS ON PRIVATE PROPERTY AND TRESPASSERS WILL BE PROSECUTED! DO NOT GO TO THIS LOCATION WITHOUT PERMISSION.

Gallery Below of Bird Creek School

It would be a real pleasure to visit this bird creek school. I have never been to any such place in my life time, and I wish I could go here at least once in my life time. The pictures you have shared above really thrilled me and I am eager to see this place. Montmartre Walking Tour

We investigated the Bird Creek School in July of 2015. Inside my cousin had started an EVP before my brother and I were ready. Upon reviewing the EVP you can hear us three whispering and discussing where we should sit and look while we conduct the EVP. Then the distinct sound of wood scraping on wood (I believe a wooden chair scraping the wooden floor) is clearly made twice. Upon the 2nd wooden scrape a distinct female voice (all of us are male) louder than our whispers says, “I’m sitting here.” During the 2nd EVP recording I was asking questions… Read more »

Do you have directions on how to get there?

sounds fun. me and my friends will have to check it out.

Can anyone who visited there possibly give the location Via Google maps? Or a more concise way of getting there? My friend and I explore abandons in Oklahoma, and this would make a great destination. So far all I find is 'behind BlueStem Lake'. Well that lake is pretty big. Thanks for any help you can give.

what happened at this school?

I went yesterday. It is VERY hard to see even though it sits right off the road. Those pictures you see have to be ten years old because it's so grown over now. It took us some time to find it. But you take It inker road to CR4225 and the a right on CR 4070. It is just past a tiny low bridge that you cannot pass in rain. I don't have the north or south because it was hard with GPS. CR 4225 is gravel just FYI.

Thank you for existing.

Is there a gymnasium at t his school. Looking for an abandoned gym.

Gonna hit this sunday reluctentl. After getting scratched last spring I am a little apprehensive

I'm with a paranormal team and we are intersted in investigating this place. can someone tell who to contact?

My cousin Blanch Brasses owns it she lives on the property just fallow the drive when you pull in.

I played in this.school.as a child, when we went.to visit the Heath'

I played in this place as a chld, when we went to visit, Mr. And Mrs. Heath

work out at home

It is appropriate time to make some plans for the longer term and it’s time to be happy. I’ve read this put up and if I could I desire to suggest you some attention-grabbing things or advice. Perhaps you can write next articles regarding this article. I want to read more issues about it!

Bubba Williams
Reply to  work out at home

It is appropriate for you to shut your stupid face

im going down to bird creek today, and im going to write my name on the board and come back sometime later to c if its there… if i come back, but anyways wish me luck.

what happened at this school?

This is a great place! We had such a great time at conservation camp here in the late ’70’s!

i grew in pawhuska and been to this school alot during the day but ,i was told that if you went n there after dark that you could hear children talking and they would push you.there is another spot close to there that is spossed to be haunted .

I know this is an old post but how do you find the school?

Picture 23 is rather interesting. What is that light discoloration in the center?

That's probably from the tone mapping I did to it, it can make little splotches of light like that.

We did our investigation out there and nothing creepy happened. We wrote one of our names on the board and set up a mini dvr and nothing happened besides nearly being bit by a snake and birds dive bombing you.

This place is truly awesome. My Team went out there and talked with the property owner about doing investigation as to the claims here. The owner is an elderly woman that choked up when she talked about all the damages done here. She said there used to be a house with it but kids burned it down. She said she went to school there as well and she's never understood why or how the rumors started. We almost never found it because in the summer it is completely taken over by trees and ivy. As well as birds that have… Read more »

Do you know the owners name? Me and my mom would like to take pictures of it.

Cant say that I read the blackboard much I did see the ones you refered to, but there are a lot of names on there & I just didnt take time to read them all.

yeah I had been searching for this one for a long time. Then the master finder of all UEing locatations, Fiend found it for us.This one had been talked about on a few other sites but never had any pics. No one will return E-mails on phone calls with any info on it either. "This school is off in the woods behind Lake Bluestem it is an old one room school house that was used for Native American children in the early 1900`s. The chalk board is still intact and it is said that if you enter and write you… Read more »

Can you give directions on how to find this place?