Bradley, Oklahoma even though it is a small town has a pretty deep history of schools, four buildings to be exact. The first school was a small one-room log house built in 1887 and burned down before 1905. In 1905 a second school was built using donations from the community and was destroyed by a tornado just a year later. A third school was constructed the next year, this time with state funding, thus the birth of Bradley School District No. 63 established on Dec. 9, 1907.

In November 1939, the third school building was condemned by the firm Hatcher & Bond. A few weeks later on Dec. 11, 1939, land for the fourth school building was acquired by a petition to the county. In 1940 the Work Projects Administration had approved the project and allocated $48,367 for a new one-story native stone school. It included ten classrooms and a combination auditorium/ gymnasium with offices. Fifty to seventy men were employed to construct the building. Men of the community transported the native stone blocks in flatbed trucks from the Wichita Mountains to Medicine Park. They then went on to Alex where it was shaped and then transported to Bradley for use at the school. The intended opening date of August came and went, the project was stalled for two months due to a delay in the arrival of the fixtures and furnishings. The opening year Colbert consolidated with Bradley after a special election vote of 38-25. Lloyd B. Barnett was hired as the superintendent. The school met all the requirements of a four-year credited high school and classes K through 12th grade were taught here. The small-town schools’ mascot was a blue and gold Celtic Dragon, drawn up in the 1930s by Leroy Guest, making them the Bradley Dragons. The kids of the community played baseball, softball, track & field and a top-ranking basketball team.

The relatively new school would barely miss total destruction when a tornado swept through the town. It destroyed the playground and ripped off seventy-five percent of the roof along with some of the walls. With the roof being ripped off it allowed the torrential rains to pour down onto the gymnasium floors. Quickly after the storm officials started assessing the damage and the roof and flooring was replaced. A $5,000 teacherage was built in 1955 to accompany the campus due to the lack of housing in Bradley and was occupied by the principal and Mrs. Lee Freeze. A year later, the school would undergo an extensive repair project. Amongst the work that would be done was redecorating the entire building, and repairing/rebuilding the shop building. As well as adding $300 worth of new supplies to the home economics department, including two new sewing machines. They also bought a new school bus and planned to buy two more thirty-six-seater busses that year. 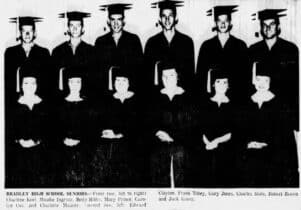 But unfortunately, due to the declining population in the town, attendance and enrollment went down as well. This caused Bradley to lose its high school classes and accreditation during state funding budget cuts of 1968. The high schoolers were annexed into Alex Public Schools and the Bradley School continued to serve students in kindergarten through eighth grade. The school continued to function like this until it was consolidated with Alex on May 11, 1990. With the consolidation the town of Alex received the school building. They built a new cafeteria onto the school and taught Head Start there until 1997 when the classes were discontinued.

The town of Alex offered to give the building back to the town of Bradley for a measly sum of $1. Bradley voted to accept the offer to regain ownership of their school, seen as a victory to the community. In another blow, the chairman went against the town’s wishes and would not accept the school placing the blame on Alex refusing to include the mineral rights with the transaction. The chairman was worried that Bradley could not afford to pay the insurance and maintenance on the school without revenue from the mineral rights. In another attempt to preserve history a proposal was made to get the school on the NRHP to qualify for a historic preservation grant. Again in what seemed to be a reoccurring pattern of offenses against the community’s wishes the chairman refused the proposal because he didn’t want to deal with a grant. An upset community circled a petition demanding the resignation of this chairman who then resigned on October 22, 2004.

After sitting abandoned for seven years, a former janitor of the Bradley School purchased it in 2004 from the City of Alex for $525. He then gave all the trophies and other school artifacts to various former students and stripped the building of all its appliances. He sold the building to a businessman for $50,000 allegedly because the Alumni Association made him angry. The new owner had hopes of restoring it but was unsuccessful and once again the hope for Bradley School died again. That wasn’t the final blow though, tragedy struck again in the early morning hours of November 1, 2010.

As the small town slept a fire had broken out in the old building it wasn’t until around 1:30 a.m that the Alex Fire Department had received the call about the fire. When they arrived they quickly realized this was no small blaze, the building was already 75 percent engulfed and it was estimated that the building had already been on fire for at least thirty minutes prior to the call. Naples, Ninnekah and Farwell departments responded t help as well. County Fire Chief Perry Wenzel said “We had it under control by about 6 a.m. and worked on hot spots until about 8 a.m. It was a total loss.” The cause of the fire was ruled as undetermined but has been suspected as arson by many locals.