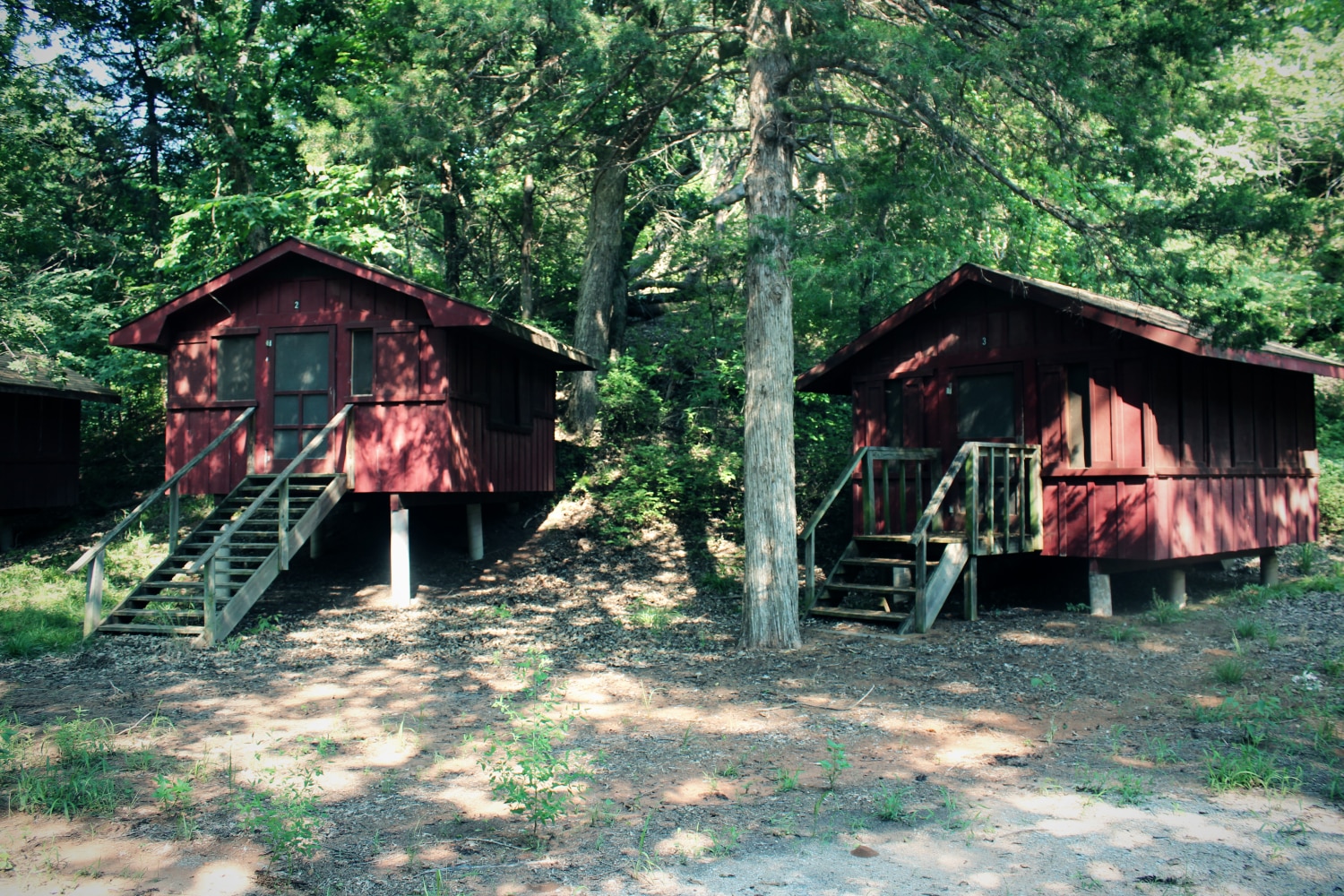 Opening in 1946 as the Oklahoma City and Oklahoma County Girl Scout Camp, located right outside of Binger, Oklahoma. These grounds were at the forefront of hundreds if not thousands of memories for Girl Scouts all over the central state. The 285 acres of land that would become Camp Red Rock, even though just thirty minutes outside of Oklahoma City, would transport you into another world. As soon as you drive up to the property you’re surrounded by lush wildlife, huge canyons, heavy foliage and a scenic creek.

The camp seemed to be equipped with just about everything a Girl Scout would need to have a grand time including rustic lodging, an administrative building, infirmary, ranger residence, dining and recreation hall, and maintenance/storage facilities. The mess hall was named “Braniff Hall” after Braniff Airlines, a corporation that dissolved in 1990 after they made a significant donation of $40,000 to the camp. The infirmary was built with the help of the Altrusa Club raising over $4,000. Rotary Lodge was built with the assistance of the Oklahoma City Rotary Club for their Christmas project.

After years of renting the land that the camp sat on, the council finally had enough money to purchase all 285 acres. The land was paid for using years of cookie sale savings and they would soon dedicate their camp. While being on the smaller end of camps compared to those like Camp Scott, it still had room to house 75-100 girls. New facilities were out in the works such as a large new swimming pool, crafts & camp skills in the lodges, and guided tours to the deep hole, lookout hill, and outpost site allowed for many adventures. Two of the recreational facilities that received the most traffic were the horse stables and swimming pool during the summer.

The name was then changed to Camp Red Rock because of the gorgeous red rock canyons on the acreage. “I remember them [red rocks] being so majestic when I was young. I wonder if they would be the same to me through adult eyes,” said Halycon. We have had many comments from former girl scouts showing depictions of their memories here.

Kate Kluberton remembers much from her days at the camp, “My sister, fellow scouts and I attended summers of the mid-sixties. What a gas we had! I went all the way through “Outpost”, where we backpacked, hiked at least 10 miles and day and slept in hammocks with mosquito nets. We hauled all our own food and water and dug latrines. I remember one pit stop on our route, a convenience store called the “Fly Inn Resort” near some lake. Armed with our coins and hunger, we bought and shared all of the candy and junk food we could get our 13-year-old hands on. The owner sang us a tune as we left and I remember every word.

“Fly Inn Resort is the place to be,
Fly Inn Resort where you fish and ski,
Bring your wife and kiddies too,
And we’ll be expecting you!”

Also, remember singing before lunch and dinner on the big porch of Braniff Hall. Still know every tune and sing them to my granddaughters. Remember singing “rounds”, where we’d start a song a different times creating harmony? Also, does anyone remember singing to the cooks after a particularly good meal? “Cookies, Cookies, listen while we sing to you, cookies, cookies you’re a part of camp life too! Anyone can make a bed, anyone can sweep, but it takes a Cookie to make us things to eat so Cookies, Cookies, listen while we sing to you!” Campfires, such fun.”

Unfortunately, all good times must come to an end after more than 50 years of functioning Camp Red Rock, as well as Camp Kate, were closed down. The decision would consolidate both camps into two other camps in Western Oklahoma to save money and bring the overall girl scout community together into larger camps. The official closing of both Camp Red Rock and Camp Kate came in November of 2010. Remnants of Girl Scouts and camp leaders saying their goodbyes are written on the walls and the property would sit abandoned for the next ten years.

New life was breathed into the property around 2020 when work to restore some of the facilities into a wedding venue went underway. Hailey Garrison along with friends and family have worked diligently to turn this property into the dreamy Redbud Ranch Wedding Venue and it shows. Work included restoration of buildings as well as the construction of brand new facilities. This is a major win for preservation in the state of Oklahoma being able to mix historic and modern into a new vision to allow for countless new memories.

Gallery Below of Camp Red Rock

We purchased the camp and we are restoring cabins – slowly

Who else camped here as a girl scout kid 🙂

love all the pics, glad i cam across this site. Camped he for many, many years in the 80's and 90's. lucky to have gotten the chance to take my daughter here once. many happy memories

I used to go to camp here back in the 90s and loved every minute of it. Of course back then Apache was the only site with cabins all others had platform tents. I learned to do vaulting here and went through WIT training here also. I so wish my daughters would have had the chance to experience this wonderful camp.

I’m so sad to see what has come of Camp Red Rocks. I travelled from the other side of the world to spend a summer here and have so many great memories of the place, and the people who shared this time.

Sandy, so glad you are restoring this “special place!” I was the Camp Director for five years for the Girl Scouts! Beautiful camp with a lot of happy memories, happy campers and wonderful staff! ♡♡ Camp Red Rock is not haunted!!! I would camp there anytime! ♡ Sandy, I really hope you open it for camping! 🙂

Camped and ran there in the 40 s and 50s as a kid. Hate to see the sad condition now.

I remember selling MANY boxes of gs cookies to go to camp red rock. And cleaning the latrines. And meeting a friend named Brenda N. We went to at least 2 consecutive years to same camp session. I remember great camp songs, salt tablets. Learning how to basket weave. Chores after meals included scraping the plates. Yuck. We washed, rinsed, and dried the dishes Now everything goes to kitchen staff, due to sanitary concerns. My big memory was one year it was POURING, i tried to untie the wall flaps, and was only partially successful. Sleeping bags were soaked. It… Read more »

dose anyone know who owns this property now? I would like to go take photographs here

I really miss that place…. I was Wheels to some and Papa Wheels to others… I hope all my campers are doing well.

iam in high school and im now a senior girl scout second year, i really miss this camp 🙁 i really wish i could visit and photograph the camp . dose anyone know who to contact about photographing the camp?

This makes me sad

I also attended this camp as a girl. Very sad to see and hear that it's closed. I wish you had taken some pictures of the red rocks themselves. I remember them being so majestic when I was young. I wonder if they would be the same to me through adult eyes.

i am almost in tears and im sitting in my tech ed class in school im in 8th grade now but i can rember camping here in the 2nd , one of the girls in our cabin's mom got sick

My sister, fellow scouts and I attended summers of the mid sixties. What I gas we had! I went all they way through "Outpost", where we backpacked, hiked at least 10 miles and day and slept in hammocks with mosquito nets. We hauled all our own food and water. Dug latrines. Remember one pit stop on our route, a convenience store called the "Fly Inn Resort" near some lake. Armed with our coins and super hungry, we bought and shared all of the candy and junk food we could get our 13 year old hands on., The owner sang us… Read more »

i visited this site in 2013 while looking for info about my favorite girl scout camp and then forgot about it until tonight, i have now been a girl scout for 7 years and iam a Cadette 2nd year , i went to camp red rock all thorough brownies . when it closed in 2010 my troop thought we would never camp again.looking back at these pictures i felt myself nearing tears to see my troops favorite camp rot away in to nothing i don't know why but i felt i just need to poste this for closure i really… Read more »

this is really sad I went to this camp for quite a few summers I went to the horse camps for 4 to 5 summers I adopted two horses for the winter when they would let you take them for the winter I had levi and highway. and I also went to the night owl camp. if I had a way to buy it I would turn it back into the camp we all love and remember. I would love to find some of the girls I went to camp with id love to see how they are doing.

funny, when i went to camp in the 80's, i remember that horse, Levi. wonder if it was the same one