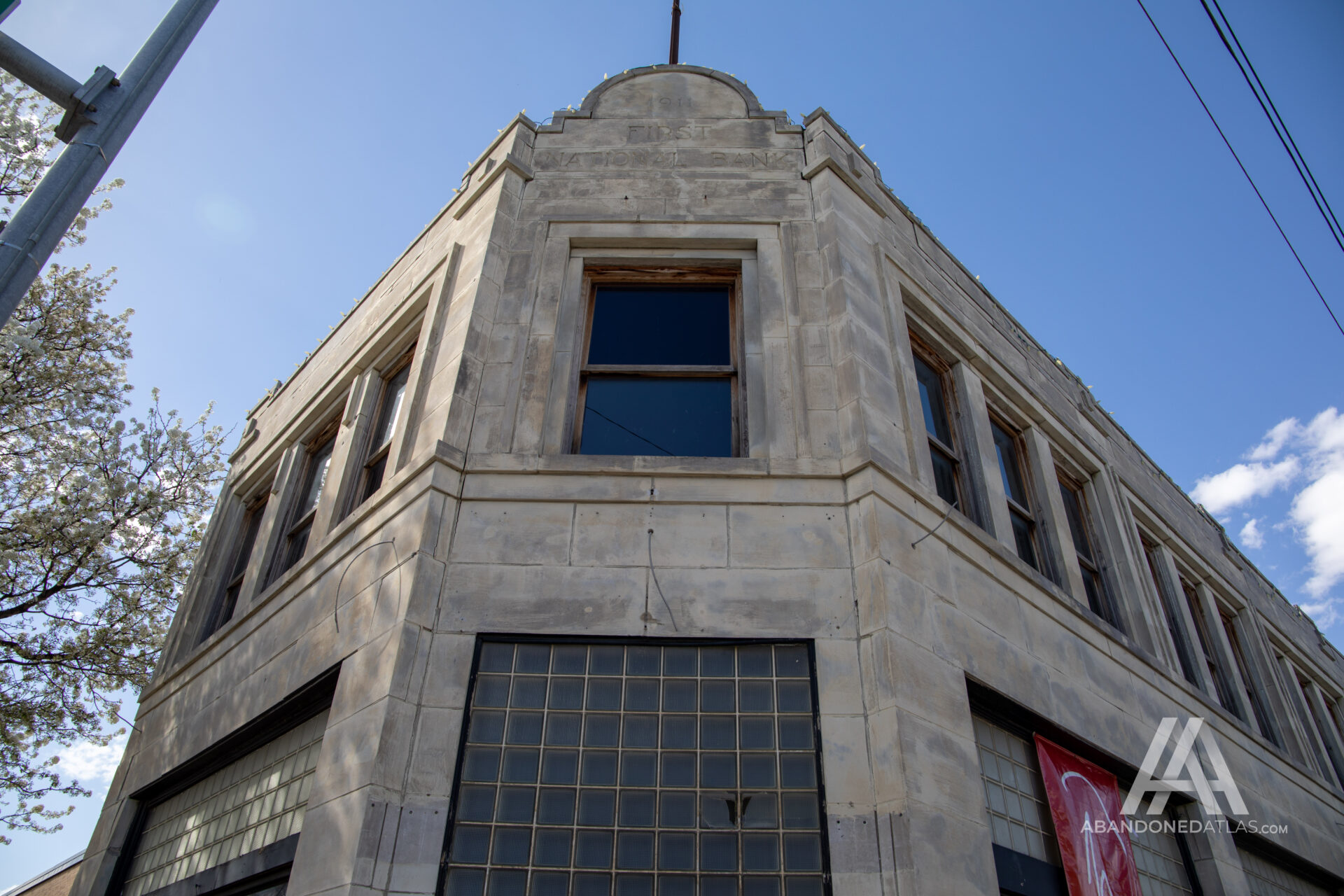 Sitting just off busy Main Street, a beacon of history towers over the downtown area. The First National Bank – Skiatook was first organized in 1905 as The Skiatook Bank. The Skiatook Bank was the first to establish a business in the town organized in December and opened officially in January 1905 with William C Rogers as President.

By the summertime Will Rogers, H.C. Cleveland, W.C. Brown, B.C. Lynch and Adrian Houck got approval on their application to organize the First National Bank of Skiatook with a capitalization of $25,000. It would be the successor to The Skiatook Bank which was liquidated but would take a few years to get the ball officially rolling. Come 1911 they would be authorized to commence business under the authority of the Comptroller of the currency. They would finally be able to construct a new institution under the National Charter 9969. An accident and material delays had pushed the construction back by months but the handsome building was finally ready for occupation by January 29, 1912.

Being made of large sturdy Nepolian Marble blocks the two-story structure was fireproof through and through. Twenty-five by sixty-feet long it dwarfs the 1907 bank just across the street. Marble wainscoting, Oklahoma Planing Mill Company provided fixtures set in mahogany with matching furniture and boasted the largest vault of any bank in the county, it breathed elegance and status. Architects Winkler & MacDonald of Tulsa in collaboration with Brickner Laws Construction and Superintendent James Garbett, a renowned brick construction man helped to make it all happen.

But there were many other helping hands involved including the setting of stones by Munn & Nichol, decorating and signage by Rickey & Dougherty and Mr. Henion laying the tile floor. The building is comprised of materials from not only all over the nation but all over the world. Concrete from Kansas, stone from Missouri, sand from the Arkansas River, mahogany from the Philippine Islands, marble from Italy, steel from Pennsylvania, and birch from the forests of Michigan.

On November 30, 1920, C.H. Cleveland made his announcement that he had sold his interest in the First National Bank of Skiatook to Ed Shackelford of Webber Fallas who would assume the position of President in his place. He noted his reason for stepping down was due to declining health and he was “giving way to a young, vigorous, experienced and successful banker and one who is strongly connected financially…”

The First National Bank of Skiatook would stop printing money in 1929 after a nineteen-year printing period. During that time span, they printed $82,300 of the national currency, only $1,383,718 in 2022. It printed two denominations of currency, 1,646 sheets of $10 and 1,646 sheets of $20 1902 blue seal national banknotes. This was the year the bank merged with the Oklahoma National Bank. The merger went into effect that summer with A.W. Lucas as President and Ed Shackelford as the Executive Vice President. Assets of the new bank would total around $500,000 and would reside in the building of the former First National Bank of Skiatook. But it was short-lived under this name.

Just a year later they would change their name to Exchange Bank of Skiatook and get a new President, P.J. Cashman. It would now change from a federal reserves bank to just a state bank. The change was made to allow for certain funds of the bank to become available for investing purposes. Cashman elaborated on the reasoning stating that when the bank was a part of the federal reserve system it was required to maintain a non-earning reserve with the federal bank.

As many banks did the Exchange Bank was no exception when it came to bank robberies. Five arrested after making off with $8,200 and locking an employee and customer in that bank vault. Below is the newspaper article:

Morning Examiner Mar 10, 1932 – Four men and a woman were held here tonight for questioning in connection with the robbery of the Exchange Bank at Skiatook, 20 miles north of Tulsa, of $8,200 at 1 p.m. today. Two of the men, Charles H. Gibson and Leon Gant, were arrested with Mrs. Ethel Gibson, alias Ethel Bartlett, after an automobile accident that sent A.D. Edwards, a truck driver, to a hospital with a fractured skull and other injuries. Gant and the Bartlett woman have police records. The three were ordered held until tomorrow when Skiatook bak employees will come here to view them. Two other men James Walsh, 24, and John Maxwell, 24, were arrested by county officers at Skiatook and brought to the jail here for questioning. All five prisoners denied any connection with the bank robbery.

Unlike most banks that perished during the Great Depression in the ’30s, Exchange Bank was able to pull through. It continued serving the community in this building until 1952 when they felt a new building was of importance. A brand new $100,000 building was built and they vacated the former 1911 First National Bank building.

In 1955 Dr. K.W. Rader announced the opening of his office at the Skiatook Medical Center at 123 E. Main. The former bank building had found a new use housing his optometrist office. The following year he expanded his office space to make room for additional visual training equipment.

From around 2010 up until 2013, the bank housed the Bank Shot Bar & Grill, seen painted on one of the bank vault doors. After its closure, the bank was set to become a mixed retail space with residential units. In 2015 a two-story red-brick addition was added to the backside of the building. The owner was able to get the building listed on the National Register of Historic Places. Attempts were made to use historic tax credits to renovate the bank portion but because of some changes made to the building, it did not succeed. The owner, unable to finish the project was experiencing financial turmoil and the building was foreclosed on and taken back by the bank in 2017. It sat vacant for the next five years.

Driving down Will Rogers Boulevard in November 2020 Laryssa Sousa drove by the vacant towering building and felt a presence pulling her in. “I felt as though God was telling me to get this building, I put in an offer far lower than what they were asking and it was accepted in February 2021. I was then like okay wow this is actually happening this is real,” Sousa said. Sousa is no newbie to running or owning a business but her vision at first for this building wasn’t exactly planned, crediting God with creating the vision and using her as a vessel. Covid-19 put a dent in getting renovations started and caused many roadblocks.

Now, things are starting to take shape and Sousa and her partner/husband Travis have kicked it into high gear to bring their vision to light. The former bank will house the 1911 Brickhouse Mercantile and Coffee Co. Laryssa provided plans for a Coffee Shop in the 2015 brick addition added onto the bank with inside seating, a drive-thru, reading nook, window seating, and would provide breakfast, lunches and occasionally dinners! They hope to stay open later than you’d typically expect of a coffee shop to be able to allow for after-game gatherings etc. Sousa was adamant that she wanted locals to have a place where everyone had something to do and not have to drive all the way to Tulsa to do their shopping or find a coffee shop to sit and study at.

The Mercantile will be located in the front of the building in the bank portion of the building The second story of the connected buildings will provide an event/conference room offices and more. And Laryssa has no plans of stopping there on bringing a new vision to Skiatook having interest in a few other business ventures after the 1911 Brickhouse Mercantile and Coffee Co. is finished. Their team has helped bring transform vacant to vivacious saving an incredible piece of Skiatook history.

Old Money from The First National Bank Of Skiatook | 9969