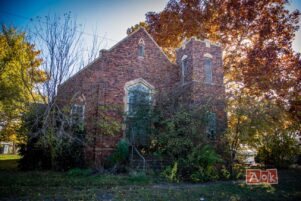 More and more churches seem to be closing, especially in small towns. Sitting in the middle of Jefferson County is this magnificent jewel with perfectly preserved stained glass, detailed brickwork and almost everything left inside. It is sad that this place that once housed so many people for weddings, events, plays, youth clubs and dinners just left for nature to take back.

One thing that I found rather odd was there was no cornerstone to mark when the church was built. Much of the surrounding area neighbors didn’t seem to know historical info other than their own personal memories. But browsing around on Social Media we stumbled across Mary Millard, a former church member who was able to provide a few photos from her wedding. In addition, she sent us an email detailing her connection with the building and the Methodist church. 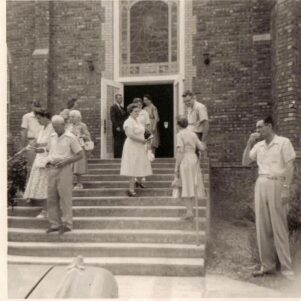 I was growing up in the Fleetwood community, we attended church at Fleetwood at the community church, which included all denominations, as I remember. Everything that happened in Fleetwood was held at this church, Christmas parties, dinners, funerals, etc. The church was eventually closed, and we began attending the Methodist Church in Terral.  I do remember the Sunday I confessed my faith in God and was baptized there and admitted as a member of the Methodist church, and I believe I was still in elementary school. We are now the United Methodist Church, but then it was just the Methodist Church, Oklahoma Conference. The building was eventually moved to Terral and was remodeled and served as a Community Center there and is located close to the current Methodist Church building. 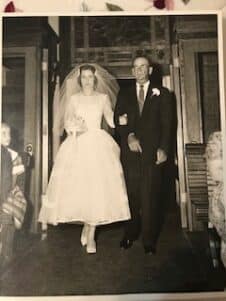 In fact, my wedding reception and bridal shower were both held in this building. I met my husband when he came as a Student Minister to serve the Methodist Church in June 1958. Student Ministers were always appointed to this church because of its close proximity to Perkins School of Theology in Dallas, so the ministers could attend seminary and serve the church on the weekends through Mondays. I had just graduated high school. I left in August to attend the University of Oklahoma. We started dating in February of 1959 when he came to a Boston Pops concert in Norman. We were married in August of 1960 at the Methodist Church in Terral after he graduated the Seminary in Dallas. His father, Guy C. Millard, also a Methodist minister, performed our wedding ceremony. 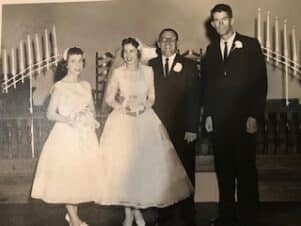 He was then appointed to start a new church in Chickasha, while I attended Oklahoma College for Women for a year and then transferred back to OU, where I graduated in 1962. By that time he had been appointed to First Methodist Church in Oklahoma City as the Associate Pastor. I know you don’t need OUR history, but he just does not remember a lot since he only served 2 years there and is now 87 years old!! He does remember the goodness of the people there in the Terral community. The church took very good care of their student ministers, and I believe he may have been the first “single” minister. They did provide a parsonage for him to live in, and he shared his evenings with a little mouse who used to watch TV with him. The mouse was not a pet, but was evidently living somewhere in or around the house and would appear randomly. That’s an old, old story that my husband tells now! We served lots of small communities in our years in Oklahoma, and the people in those towns are the “salt of the earth.” They are kind and caring, and we have lots of wonderful memories of raising our children in those small towns. Wonderful, wonderful people. 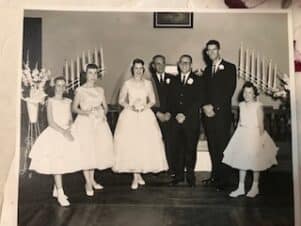 My parents continued to attend the Methodist Church in Terral until they moved to another nearby town in 1961 after the Post Office was closed, where my dad served as Postmaster, and the cotton gin that he owned and operated was moved to Terral. According to the centennial history of the Terral communities, the church closed in 1990.

Fred Thomas’, who was raised in Terral, parents and my parents were close friends, and he was my younger sister’s first boyfriend! He has given me permission to send this to you. I can name a few people in the picture, including my husband Glenn and me, my sister and her husband, among others. My memories include Sunday School in the church, many fellowship dinners in the basement, showers, weddings, etc. Ms. Laura Hill was the pianist at the church while I was in high school, and she was a mentor to me and insisted that I play for her when I could. She was a dear lady and even when my mother and I were late to Sunday School and Church, she would get up off the piano bench and motion me down to play for Sunday School and eventually for the church service. I did that until I graduated from high school. I always accuse my husband of marrying me so he would always have someone to play piano in the churches he served!

Want to buy an abandoned church?

Getting in contact with the owner, we discovered he is looking to sell the property and hopes that someone with rehabilitation intentions will purchase it. If you are looking into buying this property, please email us at board@abandonedatlas.com. We can put you in touch with the owner. Serious inquiries only, thank you!

Gallery Below of First United Methodist Church of Terral

I was saddened by the “lost” feeling —- it appears that everyone just got up and walked out, leaving books, probably music scores, piano — everything. Something really bad must have happened other than just the movement of people away from the area. Anyway, the pictures cause one to pause and reflect. I did read the story of the history of this church written by someone who had been there when it was in service.

I grew up in Terral and even though we were Baptists, we had many friends who worshiped there. Leonard and Opal Andrews, Bertha Chally, Viola Malone, Charles and Sue Yetter and Sue’s mother, Hallie Spoon, the Trouts, the Lintons as well as the familys that Mary Millard discussed. Grady and Nina Hightower were longtime members and Nina’s funeral was held there in 1958. The Lion’s Club met weekly in the basement. In the late sixties Robert Ray came there as pastor. He was a good friend of mine and he and I carpooled to Midwestern in Wichita Falls together. I… Read more »

oh if only I had $ would make this into a home or something… so sad to see it like this, love the window of Jesus in the Garden

It is sad so many of the older churches haven’t been able to be saved. I’m glad Mary Millard sent you this information. Pastor Glen Millard married my husband and I in the Fort Cobb United Methodist Church in 1970. What a wonderful couple they were.

Are there any grants available to possibly restore this diamond in the rough? I sit here and look at these pictures and I am finding myself thinking about a materials list. A lot of these pews, tables, shelves, fixtures, can be restored or rebuilt. Some of the stuff like hymnals, bibles, etc. could be put into a display case.

It saddens me to see the UMC of Oklahoma have allowed this building to decay. there was a lot of good material in that building could have been sold and salvaged. Now it is to late as fixtures have been broken, pews are ruined, a grand piano ruined. Miracle the Good Shepherd Stain Glass window is still intact, That window is worth $1000s of dollars. Oh well .

I grew up about 10 miles north of Terral in Ryan, Oklahoma. I always loved this church it was so elegant. How sad that it’s fallen into such ruin. I hope someone buys it and restores it. It’s a fine place and would make an amazing church again or a home for someone.

I grew up in Terral and go back often to tend to my parents graves. My great grandmother, Hattie Linton, attend that church and her funeral was held there. I was about 9 or 10 as I recall, at the time of her death. I always thought the steps leading up to the front doors were so impressive & even to this day when I drive back through Terral, I’m so impressed with the regalness of this structure. This church truly has a personality and with people working from home now, this church deserves to be bought, restored and brought… Read more »

I can find out soon. Email us and I will let you know

It’s almost an eerie feeling, looking at these pictures. I went to check out a house that was for sale recently. It looked as if the family had just gotten up that day walked out of the house and never came back … It was kind of an eerie feeling walking through there… needless to say I had no interest in that place.

….but those pictures from Mary though…. that black and white and the history is just breathtaking! Hope your doing well on Christmas too! Amazing shots as always!

Beautiful pictures of the abandoned church. It’s like everything was just left in place and the people left taking nothing, thinking someone was coming to take over. I love pictures of abandoned places because they are so haunting beautiful but I long for the story behind them. I enjoyed the black and white pictures the lady shared and her story thank you! Merry Christmas ♥️

Communities everywhere are suffering especially with this “social distancing” rule. The beautiful Methodist church here in Holdenville are limited to the one family at a time to the ‘HANGING OF THE GREENS’ Christmas Eve.