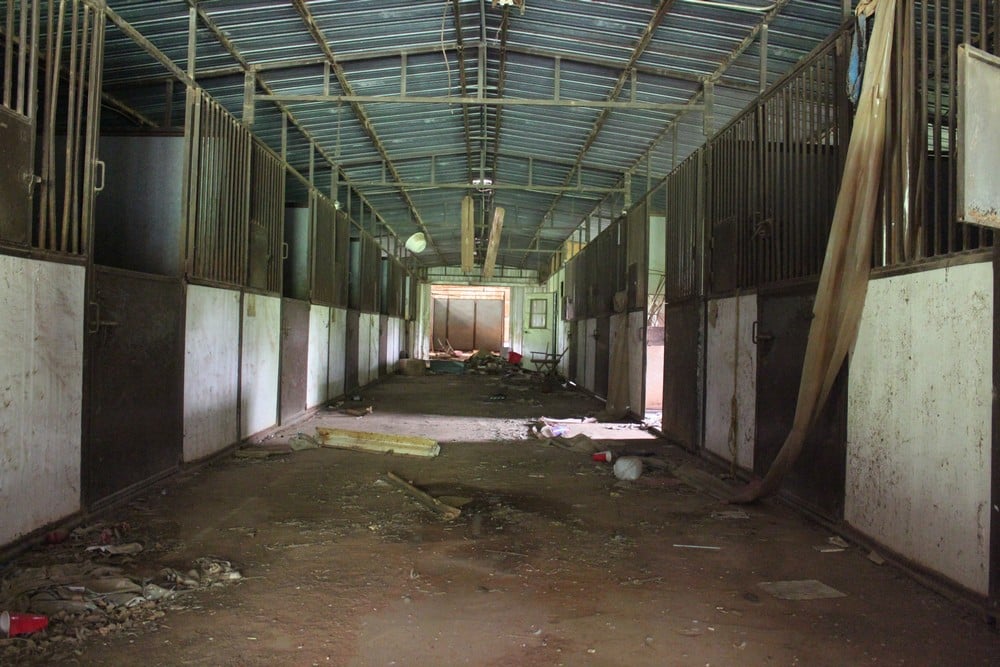 THE PUMPKIN THAT NEVER MOVES

Hidden beneath a lush canopy of trees, tucked in the center of a neighborhood located next to a major highway, rests an abandoned horse stable and a house. The once vibrant property has been stripped of its color, only carpet and a few appliances remain. But in one particular room sits a bright orange pumpkin that hasn’t moved an inch in over a decade.

DISCOVERY AND THE PAST

When I first started exploring back in 2011 I came across AbandonedOK before becoming a team member. One of the first buildings that I saw featured on the website was Henderson Quarter Horses. As I scrolled through the photos, digging into the history of the place, it started looking more and more that whoever inhabited this place had just gotten up one day and left.

The horse stables were still intact with the horses’ names engraved on the outside of their stalls. Old cars, a motorcycle, a vintage fire truck, farm equipment and a little house down the road remained frozen in place. It was clear that nobody had been to the site in approximately 20 years. While I explored the site, the same name kept cropping up on multiple files lying around the property, Joseph Henderson. As I learned more about Joseph I gathered that he was an avid collector of old military machinery manuals, but outside of that, little information could be gathered. A lot of questions I had about the property and Joseph were left unanswered for nearly ten years, that was until I talked to his son, Joe Henderson. 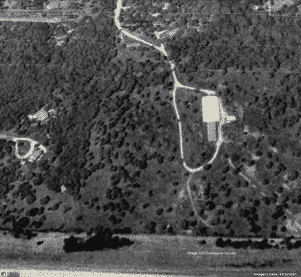 Joe gave me insight to his personal history with the property that had carried his namesake. And to my surprise, it had been more than just 20 years since the property had been abandoned.

“To be honest,” Joe stated, “I’d say no one’s been there since the late 80s. I graduated Highschool in ’86 and then dad sold the property. After that, it went downhill.”

Dr. Joseph Henderson was an anesthesiologist, militaria collector, historian and gun collector. The horses were a passion of his wife, Gay Henderson. Back in the 70s and 80s, the thriving horse farm was home to around 25 horses, some of them bearing world champion titles. Many owners would board their horses here and others came to the arena to see them perform.

Joe mentioned that horses could be a lucrative business. “There were multiple ways to make money with horses if you did it right, one was using them for rides down a trail and to the beach, another was letting trainers come by every week 6 days a week. My dad had a six-horse truck and trailer then 2 years later had a 9-horse semi. He did it right.”

Walking around the property, I am overcome with a sense of tranquility and always felt at peace. There is something beautiful about the serenity and solitude of the place. Among the various farm and military equipment scattered around the property, within the house next to the stables, there are two rooms, mirroring one another like a gateway into another dimension. In one room the ceiling fan has crashed to the floor, the walls are starting to crack and debris from age and the passing of time can be found spread across the floor. Just on the other side of the wall lies the same room but in perfect condition. The ceiling fan remains whole above the ground, the floors are clean and the windows remain intact.

FUTURE OF THE PROPERTY

According to a potential buyer I spoke with, the current property owner may finally be selling the property to be turned into more neighborhoods. While it would certainly be sad to see the old property go, a new residential area creates the opportunity for building new homes for families to create new memories. While the old history of the place may be uprooted, that bright orange pumpkin will remain, unflinching to the passage of time.

I mowed every week and we had about 25 horses in the barn and a couple of pastures.

We had some of top quarter horse trainers thru the barn in the 70’s and 80’s.

Three of the trainers thru the barn were: Dale Livingston, woodmere farms (hunt and jumping) would stop thru, and Wayne halverson (halter horses and breeding).

That’s Cool I Wish I Owned A School.

Joe, could you please call me. I’d really like to speak with you about the property. Im in the process of trying to purchase it. I grew up one street over and spent time with a kid named Camaro there. 405-408-6545

I remember visiting often in the early 80s. Guess you could say dated your sister. Always wondered what happened to her. It was a very lovely place back in the day.

I’m sorry Matt, we cannot provide the address. Sorry for the inconvenience.

Hmm ok can you give me a road name thats close to it then?

Other than the john killpatric turnpike

No, I’m sorry, due to vandalizing and theft, we cannot provide anything.

In all honesty i would love to take on the task of that barn. Its not in bad shape, and if so its nothing elbow grease and hard work and some cleaning cant fix. I wish i could meet his wife though.

I used to go out to this place when it was a thriving horse farm in the 70's, early 80's. Haven't been there in years. Dr. Henderson's wife comes in our store so next time she's in I will try and find out who owns it, etc. She is still involved with horses. Friends tried to buy the place a couple of years ago and it had a huge price tag. I figured it would be a housing development by now. I do know that Dr. Henderson used to do war reenactments out there and had sherman tanks, etc. on… Read more »

did you ever find anthing about this place i would like to go there!

I don't know if you saw it or not but there is a whole back section behind the house. There are two more smaller sheds with a military door, a big fertilizer, and a fire dept. truck from Guthrie. The sheds also contain "Henderson's" old files and records.
If you look through these photos you will see. http://www.facebook.com/media/set/?set=a.23422919…
Very Fascinating, and thanks for sharing

I think my favorite one is pumkin pale. It looks so cute and out of place! 😛

As a "horse person" I find it very sad that a nice home and horse facility is going to waste like this. =(

Thank you for sharing the pics. Very interesting!

I used to board my horses there, back in the day. Dr. Henderson, his wife and their children were all friends of mine. Many World Champion Quarter Horses lived at this farm. Many others were in short residence there during the QH World Show (didn't want to stable at the Fairgrounds). Dr. Henderson was eccentric, but was always very nice to me. I remember one time his showing up at the barn in one of his military jeeps with a loaded machine gun on the turret! LOL Another time, he told me to not go near the house if there… Read more »

Too funny all the grumbling comments on this site!!! I think shot #30 is funny too! I like the ceiling shot with the ceiling fan…too bad no one enjoys it anymore…Take Care –Tery

Well, for one thing, for sure it's trespassing. And if it were my place, I'd sure like to catch someone on it. On the other hand, there are many more interesting and much more historic sites than this dump. It was a disaster, when it was a going concern. I'll bet you guys miss more than you photograph.

Actually, no one said they trespassed to get pictures of this property, please dont assume that. I am speaking for myself as well as the other explores on here, depending on locations, we will spend hours there documenting everything. Sometimes we take far too many photos to post on here. But I'll take your constructive criticism and post happy demeanor as your way of saying you enjoy this site.

Hey Steve. Thanks for the comment. I can assure you that when it comes to interesting locations, beauty is in the eye of the beholder. What we find interesting might not be to another, and vice versa. So in the tradition of AbandonedOK, we put everything we find out there to the world to enjoy and share their memories. This location is actually a great example. We couldn't find any history on this place in any of the archives we are members of, and left it up to the comment section to do the work for us. I'm not sure… Read more »

Curious to know, why would anyone be interested in trespassing on someone elses property. This place is not exactly public domain. Would hate to get caught.

to preserve the history of this great place before someone destroys it. i have been to a few places on this website and they have all been vandalized, its really a shame that people do that kind of thing. i am an aspiring photographer and i think that this place, from the pictures posted on here, looks like a great spot to take my own pictures. i would really appreciate the address to this spot. here is a link to my photography page, to prove that i really take pictures http://www.facebook.com/home.php?#!/group.php?gid…

Steve, I should think the existence of this website and all the wonderful photos we have taken are more than enough reasons to understand "trespassing". Its all about ones intentions. "Take only photographs, leave only footprints". I believe people give up the right to keep explorers out when they neglet their historical property and let it decay. If you'd hate to get caught, dont do it 😉

Thanks, that's really interesting. It's great that you know so much about this place. Can you give any other clues as to where it is? Besides by the turnpike?

This was the home of Dr. Joseph Henderson, a local anestheologist, militaria collector, historian, and gun collector and enthusiast who lived on this site. Joe's wife enjoyed horses, which she took to many area and out of town shows. The Kilpatrick Turnpike and nearby housing developments swallowed part of the farm. Dr. Henderson passed on in the late 90's and the rest is history. There is no telling what might be buried around that place. Surely a cache of ammunition!!! As Joe was an avid survivalist, who thought a good deal about keeping things hidden. There are several large dump… Read more »

wow i wanna see this one, i have been to gandinis circus and the house in edmond.

Yeah, can we get some more information on this place please?

Tell us more about this place, please. Very fascinating. What was the place like in its heyday? What happened to the family and horses that were here? When was it abandoned and why?