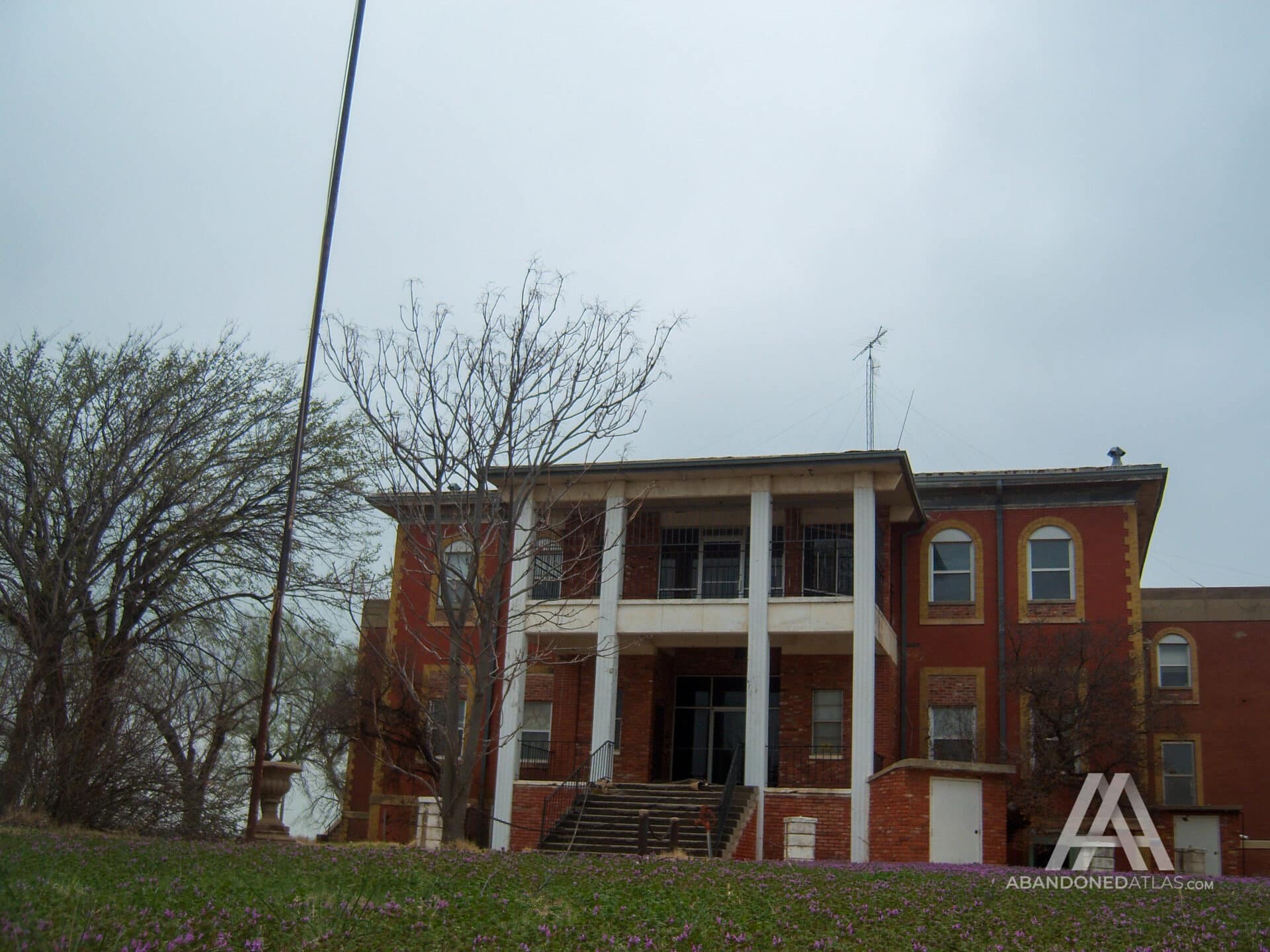 The history of the home begins five years prior to its opening in 1902 when the Grand Lodge of Oklahoma passed a resolution authorizing the construction of an orphan home. Letters were sent to a handful of different lodges within Alfalfa County calling for them all to meet in Carmen. Here, on April 3rd, they would come up with the perfect proposal in order to secure the location of the orphan home in their county. Subscriptions from towns all over the county were taken with Carmen presenting $5,000 winning the spot for the location of the home. All other lodges in the county agreed to contribute $1,000 in order to have the home in Carmen.

W.H. Willhour and A.T. Whitworth were the two chosen to make the proposal to the Grand Lodge. Two officials were sent to Carmen representing the Grand Lodge and in charge of making the location choice. They were entertained and thoroughly impressed with the location insisting that it was better than any other city in the Territory. Only because of finances was the proposal decision deferred to a later date. That date came in October 1905 when talks about an orphanage reopened. Carmen’s proposal for the home to be located on a 160-acre tract of land with hundreds of dollars of fruit trees was accepted.

With that work commenced on a $15,000 four-story brick building with a courtyard feature on top. Contracts were awarded to Messrs. Billing & Snyder of Guthrie. Two floors contain 25 rooms the living quarters, a ten-foot basement, and a nine-foot attic make up the blueprints. The granite for the large cornerstone was donated by IOOF Lodge No. 63 of nearby Granite, Oklahoma. It was laid on October 13, 1906, with an assembly and march to the building prior. Dedication of the building came on April 26, with the address presented by John B. Goodwin.

Just a few months later there were fourteen orphans seeking refuge in the home. Mr. L.M. St. Clair was superintendent, his wife Mary V. matron, A.W. Bruce secretary, A.T. Whitworth as treasurer. An additional wing in was deemed necessary for the building, it would be the first of many renovations to the structure throughout its life. Altogether it would cost roughly $25,000 and wouldn’t be open until late 1913. This would bring the capacity level of the orphanage to 150 total. By 1917 the other three additions would be complete and for a total of around $75,000.

The town took great pride in the establishment even holding annual visitation of the grounds. These events would bring in thousands of visitors to catch a glimpse of one of just fifty-six homes throughout the US. Children at the Home participated in chores on the farm, doing their bit to keep expenses down. They harvested as much produce as possible for themselves including milk, butter, and various different vegetables. The fraternal organization oftentimes strayed away from the word orphanage and honed in on it being a home. They did not want the children to feel unwanted or temporary and that this was their place. They did everything else that any other child would do such as school, sports, programs, playing, etc.

Harold Dallam and his two brothers grew up in the home after both their parents passed away. Harold remembers, “The lodge was good about taking care of members’ children. Not so many government handouts in those days. We learned to make our beds, run a sewing machine, darn socks, milk the cows and care for hogs and chickens. We had a big garden on the 160 acres at the home.” Harold left the Home at 16 years old, which was the rule for boys, girls got to leave at 18. Many were taken in by community members offering to help on their farms and labor work in exchange to live with them. Others chose a path of joining the military to get on their feet.

Clyde Stevenson’s father Edmund Stevenson, received admission to the IOOF Orphanage in Carmen on December 25, 1907. Along with him were his three sisters and brother, his aunt Chole Nellie Stevenson being buried at the cemetery there. Over the years Clyde had collected a handful of photographs from his family’s time at the orphanage that he has been able to preserve to this day. Clyde has no idea who any of the people outside of his family are in the pictures and the passing of his father in the seventies took any possible answers with him.

However, the need for such a big institution in western Oklahoma diminished as did the population. The Independent Order of Odd Fellows Orphanage of Carmen would close indefinitely in the summer of 1943. Cause for the closure was the lack of children residing in the Carmen orphanage. The remaining children were then transported to the sister IOOF Home in Checotah. Later that fall the IOOF ordered that all furnishings and equipment be sold from the Carmen Home at a public auction. Items up for sale would include farm machinery, livestock, and building equipment such as beds, mattresses, office fixtures, etc.

The home then became vacant with many proposals made as to what it could be repurposed as. In 1945 the vacant home was offered up, free of charge, for use as a veterans hospital but never came to fruition. Two years later talks within the organization ramped up to find a viable use for the building. Lodge officials had come to the conclusion that selling the building to an outside entity and allow for the building to be dismantled was not an option. This was out of respect to the Carmen community and their contributions to getting the Home built here in the early 1900s. It was the end of an era having cared for around 805 children over the years and predating statehood by just a year.

A reasonable price for the building was agreed upon and would allow for an outside entity to purchase it as long as it was used as a home or something of that nature. The Pentecostal Holiness Church bought the Home, dairy barn and surrounding 160 acres for $35,000 in spring 1949. The church had felt an urgent need for a children’s home in western Oklahoma and was eager to open the home by September. Superintendent Rev. John T. Mahoney already had three children residing in the home awaiting opening day. One of those was a newborn baby boy brought by a minister from Texas.

Before they could officially take over the property a storm wrecked the barn and uprooted multiple trees on the property. This wasn’t going to stop them from acting out their plans. Five elderly were cared for upon opening the next year and steps to further develop the children’s denomination were made. Six staff members were the glue to the facility including a registered nurse. Each child was to be taught a specific trade caring on the Odd Fellows’ way of life who used to teach stone masonry to the children.

Rev J.W. Lemmon took over as Superintendent of the combined home for the elderly and children and continued to run it until its closure. Under his direction, the Carmen Home held Christmas parties, carnivals, visitation events, capping ceremonies and more to engage the community and its residents. The lack of children caused the organization to rebrand as the Carmen Home for the Aged around 1970. The aging population of the surrounding diminishing towns allowed for the elderly to live out their days in the comfort of the Carmen nursing home.

During its time as a nursing home, the fourth story of the building was removed when the elevator was being installed. A flat roof was installed to make maintenance easier and so that an elevator wouldn’t have to be extended that far up. This was needed due to progressive ADA laws throughout the USA.

Unfortunately, the small building became too much for the small town to take care of and the nursing home was closed in the 1990s. The building remained vacant for numerous years experiencing break-ins, vandalization and natural decay.

The Fountain of God Church moved into the building around its incorporation date in 2014. It served as a religious drug rehab center, similar to what its sister the Odd Fellows Home of Checotah turned into. Though this repurposing of the building didn’t last long when the church vacated the property just a year later. Since then the building has sustained significant water damage, vandalization and the damage that goes hand in hand with a building being abandoned.

This is private property and was toured with permission. Those that trespass will be ticketed or arrested by Alfalfa County Sheriff’s Department.

So many beautiful chairs and furniture there that could be restored! Lol the building is interesting as well of course but those chairs…

Such a beautiful building! My parents grew up in Alfalfa County.
Sad that the removed the beautiful top story!
Would be wonderful if it could be restored!
There are millions of dollars spent in building new building now!
I feel Restoration should be done instead of tearing down and putting in new. This building has proven it’s “stand” in time!

My understanding is a storm damaged the top floor and that’s why it was removed.