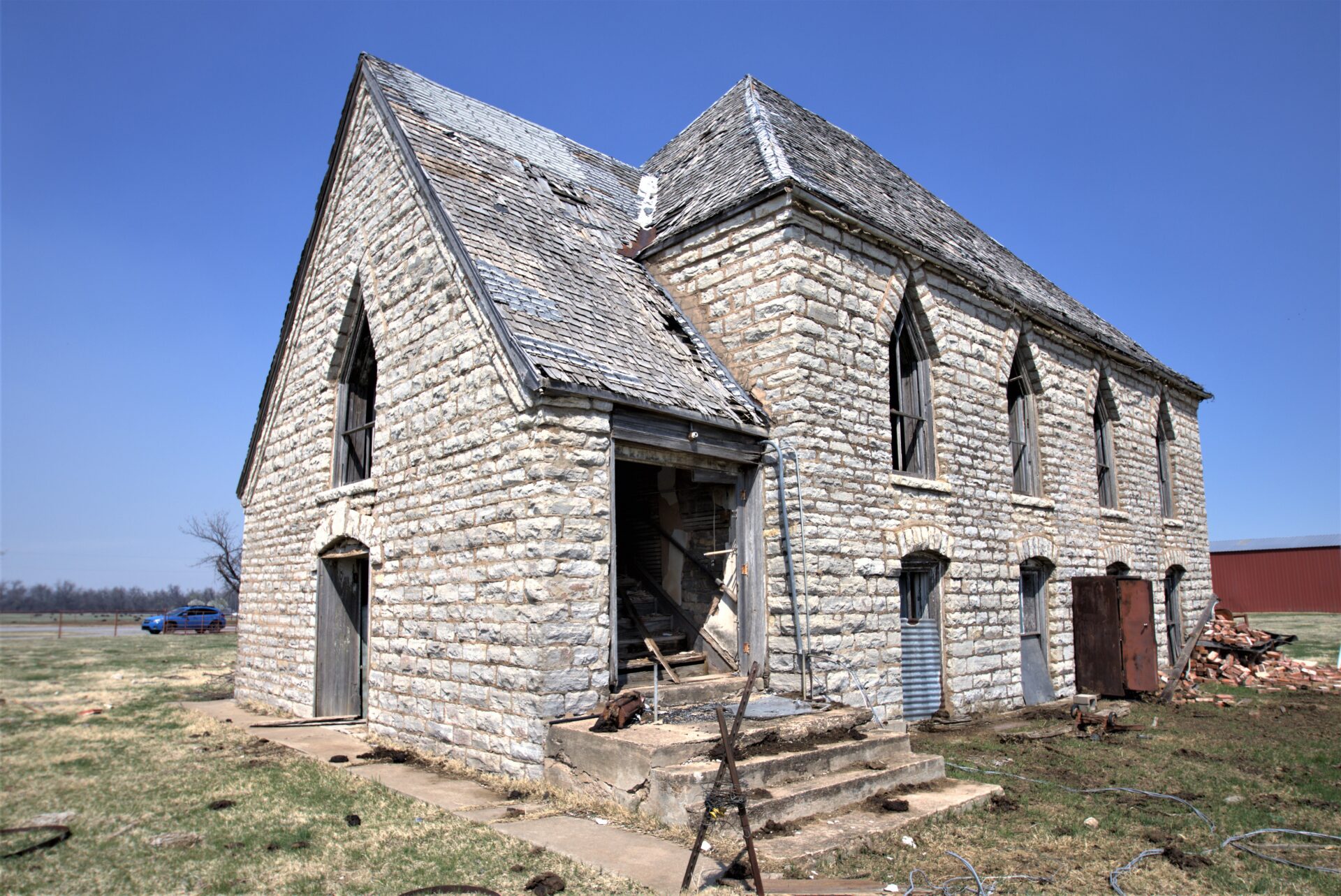 Shocked we had not heard of this location before we knew that when it finally was put on our radar it was important to document this amazing piece of Oklahoma and Native American history that is known as Cache Creek Mission. So off our Photojournalist, Jeff Hodge went, to take a private tour of the property.

Located in the heart of the Kiowa-Comanche-Apache Reservation, it dates all the way back to 1889. A gentleman by the name of William Work Carithers traveled from Pennsylvania with a mission to bring Christianity and skills to the Native Americans in what would become Oklahoma. He established the Cache Creek Indian Mission under the Reformed Presbyterian Church.

In the early days of the Mission, there was much work to be done to prepare the 160-acre plot for activity. Fencing was put up for miles, numerous plants including millet, and pumpkins were planted. The first building on the land would become the School Building made of stone and cost $2,000. It allowed for teaching, eating, and sleeping for thirty kids but later would house just the girls sleeping quarters and a down would be built for the boys. The first floor would be two recitation rooms and the second floor would have two dorms for students and two rooms for the teachers. The basement of the building contained the kitchen and dining room. Finding workers wasn’t the easiest task to complete the other buildings since it was relatively far from all developing towns but alas a few worthy men were found to help haul materials.

The property would soon include a stone water tower connected to a well to provide water for the campus. Also laundry, church, boys dorm, pump house, barn, farmers home, and missionary home on the land. One of the essentials to have on the property was a hospital. Being so far from the nearest town and diseases like smallpox reaching the Mission a hospital was ordered to be built in 1902. Constructed of stone in the shape of a Greek cross each of the arms was a room of 16×18 dimensions. This allowed for any sick on the grounds or nearby to be tended to on-site.

Noteable staff of the site in 1909 included:

The first communion highlighted in the picture above was held in May 1905. The Mission was proving to be successful with the church membership hitting around 100 in the early 1900s. The dairy barn was originally two stories but had the top blown off and underwent reconstruction that has allowed it to continue standing all these years later. But by 1918 the mission school was closed when Native American children were granted permission to attend public schools, the grounds were still used extensively by the community.

About 1923 W.W. Carithers stepped down from his position as Superintendent in 1923 after his declining health got in the way. Rev. C.E. Caskey took over for a brief period until a replacement could be found. Paul White, a young minister who had previously worked at the mission would take over May 1st. He would serve as Superintendent until 1927. Mr. W.W. Carithers passed on May 20, 1930 leaving behind a legacy of missionary work. His memorial service was held in the Cache Creek Mission Chapel. Rev. R.C. Adams would succeed him and hold the position until the early 1940s when D.C. Ward would take over.

In 1939 Cache Creek Mission celebrated its 50th year anniversary. The event was celebrated by 40 ministers and elders from many different missions all over Oklahoma and Kansas. A massive buffalo dinner was served to 350 people that evening. At the time Gene Vail was just becoming accustomed to being the new farm superintendent having taken over the position from Caly T. Williams who held it for the last twenty years.

By 1960 Gene Vail and his son James were able to purchase the 240 acres surrounding the Mission from Dr. J.H. Mallory through his heirs. The Mission, still providing church services and by the community as a place where women would often make quilts and other things declined in membership throughout the ’60s. The need for all the buildings on the property was lacking and they started to be sold off and torn down. Jim Webb purchased the 2 story hospital building from Vail and salvaged all the materials from it. The girl’s dorm building/school had the top floor was removed and the stone was used to construct a garage that still stands today.

On December 4, 1970 the Cache Creek Indian Mission officially disbanded due to lack of membership. Upon the disbanding, Vail was offered the additional ten acres with the remaining Mission buildings and bought it. The property has continued to stay in the Vail family for the last half-century and has now been passed down to Richard Vail. In 1995 the Mission was listed on Preservation Oklahoma’s Most Endangered List.

All that remains of the acreage’s former life is the original church building constructed in 1892, the water tower, half of the girls’ dormitory/school building, and an original barn. Richard Vail told a story about his grandfather, then about 80 years old. The family had been trying to keep his grandfather out of the fields due to his age. That hadn’t gone so well, one day after everyone got back from working the farm, they found their grandfather had constructed a wooden ramp to remove the bell from the church. He had lowered it to ground level, by himself, using ropes and a tractor. This bell and all its hardware (the rope pulley and support brackets) currently sit in one of the shops on the farm. Also in the shop is a smaller bell that had been at the entrance to the school, this bell was removed after someone stole the clapper.

Other artifacts scattered throughout Richard’s home from the old mission days included old pictures of the school and three chairs he said used in the church. Two of them, sat on either side of the altar for guests while the preacher gave his sermon. The ornate wooden chairs originally had a leather seat, but Mrs. Vail replaced these with crossed stitched floral seat cushions when the leather got bad. Mr. Vail told of the church selling their pews and replacing the seating with chairs, presenting another less ornate sample of a chair. He noted that after the church disbanded many of the things from inside found a new use in the community. The preacher’s podium is currently used at a local funeral home to hold the guest book when a funeral is in progress.

Gallery Below of Cache Creek Mission

Awesome! Keep up the good work!