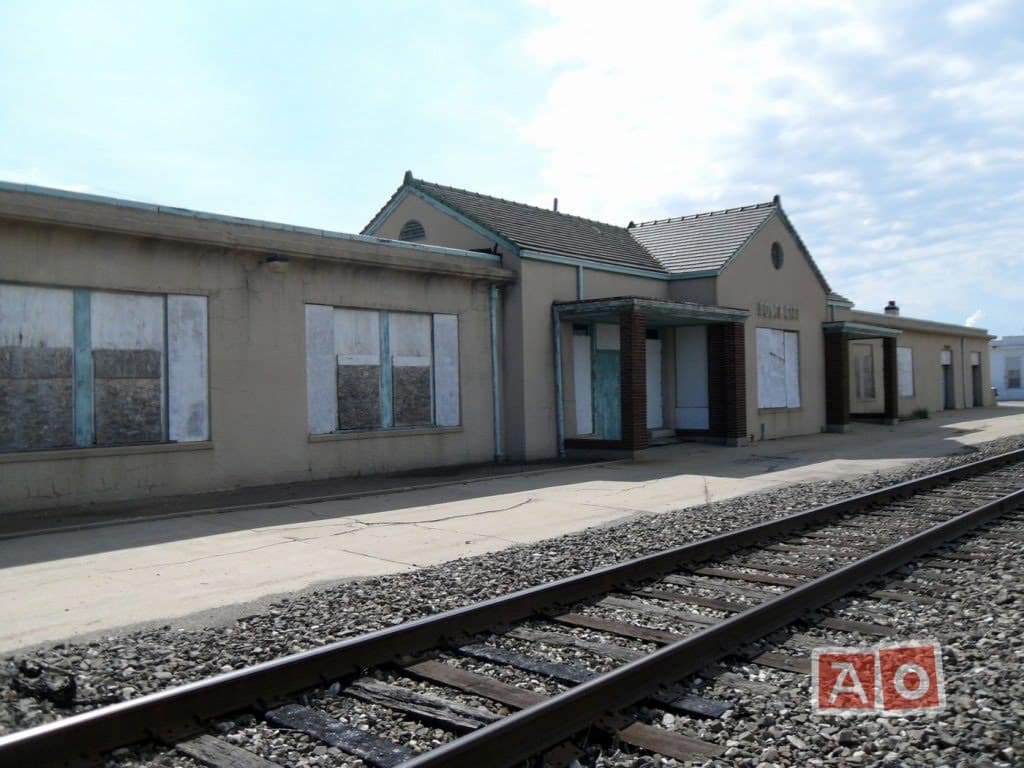 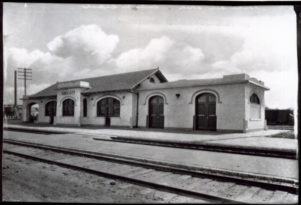 How Ponca City got its depot is a very interesting one, starting with a rivalry between two towns. Cross Oklahoma a ghost town now, felt that for a Cross man to visit Ponca City was like putting a target on your back. With stations in Cross and “Old” Ponca, Santa Fe refused to stop when passing through “New” Ponca because it didn’t see financial gain. This meant “New” Ponca residents were made to drive to the Cross depot every day. Numerous letters and telegrams were sent to Santa Fe officials to have a Ponca City Depot, pushing further once “New” Ponca’s population reached that of Cross. Finally agreeing to do so but without building a depot, the first trained stopped at “New” Ponca at 9:27 a.m. on Sept. 22, 1894.

A temporary depot was made out of a freight car fitted with windows. This new station was given the name “White Eagle” by Santa Fe officials to honor the Ponca’s chieftain and then “New” Ponca became Ponca City. Only when H.W. Liddle, a Santa Fe agent was promised two lots of land, good ones at that, by the Ponca City Mayor did he agree to have the depot at Cross and its offices moved to Ponca City in 1984. The move was made at nightfall to ensure that the Cross residents weren’t able to secure an injunction to stop the move.

In 1910 after much discussion it was agreed that work would commence on a new Santa Fe depot. It would end up being a state-of-the-art Spanish Mission Revival-style passenger depot. Featuring pebble-dash over brick veneer giving the appearance of a solid concrete building. Costs stacked up to a little over the planned $20,000 with construction costs coming in at $22,000. The new depot was dedicated on April 22, 1911, on the anniversary day of Oklahoma becoming a territory.

The handsome architecture was something the community had never seen in a depot before making it appealing to all eyes. Nearby Perry decided it would duplicate the new Ponca City depot in its town because of its stature and modernistic qualities.

On April 12, 1920, the Santa Fe depot experienced something out of a wild west movie. According to the Shawnee News-Star, an unknown man with a soft southern drawl ordered J.A. Shelp, the Santa Fe night agent to put his hands up and follow him across the tracks. He then proceeded to tie Shelps up being a building and returned to the depot. He blew the safe open and fled the scene with $1,500. Ten men were sleeping in the waiting room at the time of the robbery and were not awaken until the explosion occurred, all were being held as suspects.

The former Atchison, Topeka and Santa Fe Railway train station sits beside the mainline running through town, which is now operated by BNSF Railway. Amtrak used this station for their Texas Chief and Lone Star passenger trains. The Texas Chief operated between Chicago and Houston, starting on May 1, 1971. 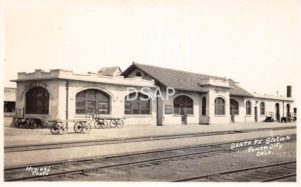 By the year 2000, the building was boarded up and unused. The Ponca City Landmark Conservancy is negotiating to acquire the depot and restore it. Ponca City Rock Island Depot was lucky enough to be fully restored, painted as a two-toned rose building, and is now a medical marijuana dispensary.

Gallery Below of Ponca City Depot

Does it still look this way?

It looks like t still has the original fixtures from the 40's, the door knobs, the lettering for the restrooms, I was born and raised there in the Ponca area.

any way to find out the name of some one who retired from there sometime around 1975 to 1979?

The poster in 2184 is interesting, in that the Amtrak logo shown wasn't used until late 2000. Strange that someone bothered to put it up at all.

i love this web site this is down by my house i love old historic sites ive always wanted to do stuff like this i like being adventerious.. but i was wondering if you have got to go in the old flour plant in ponca city??

If you're talkin about that large silo by the Depot, than yes. But I didnt venture in very far because of some God aweful smell, random junk everywhere, and it didnt seem to be in the best of shape on the inside.

This is just a few blocks from my home. I've always wondered what it was like on the inside. I hope Ponca City decides to restore this – I'm actually surprised they haven't yet. It's in an area that could use a little facelift.