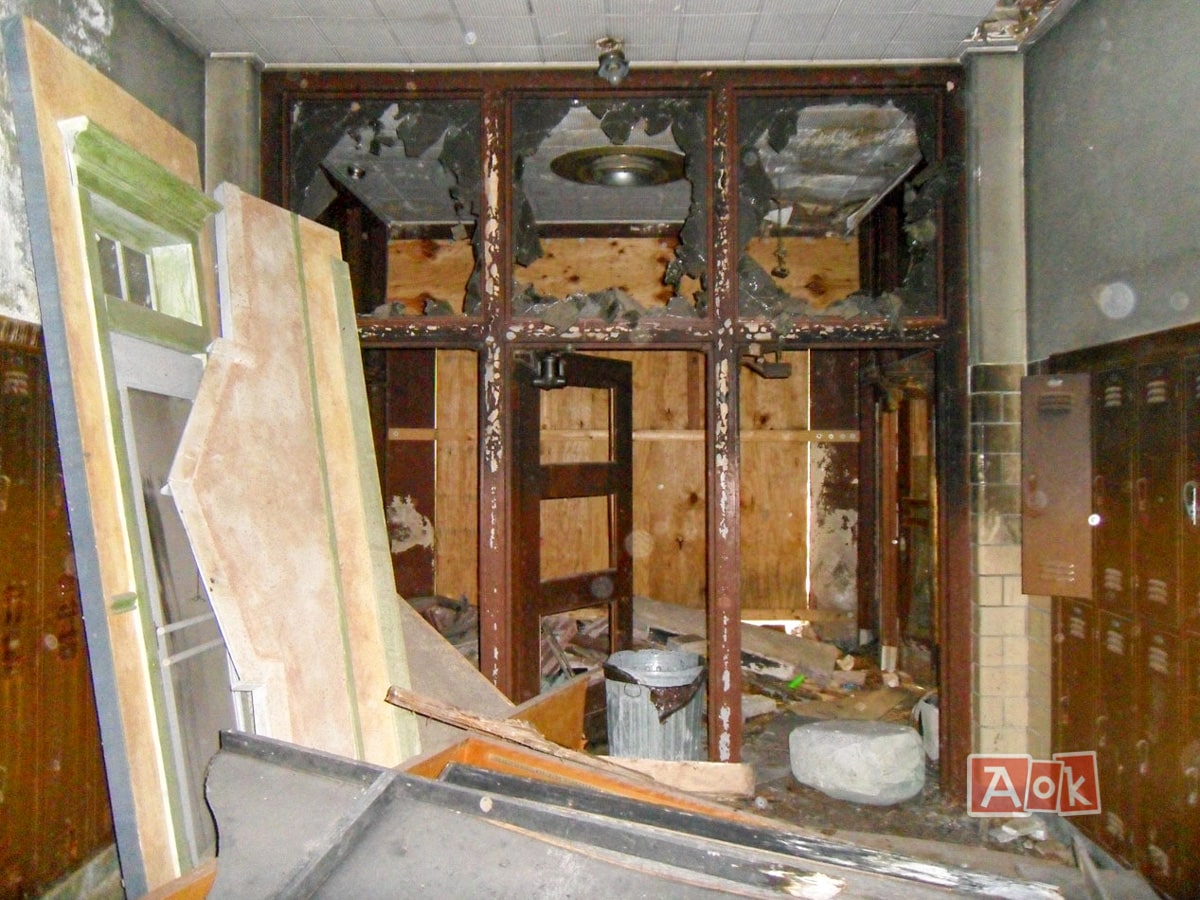 A task force had proposed the closing of Riley and several other schools after Tulsa Public Schools’ enrollment fell from approximately 80,000 students in 1968 to 59,000 in 1978.

At the time of its proposal, the task force was considering a projection that enrollment would fall to 52,000 by 1981. The district now has about 43,000 students.

In 1981, then-Superintendent Larry Zenke said Riley was one of five schools in need of major renovations. Between 1981 and 1988, the district expanded the facility and bought eight acres to expand its 2.5-acre campus.

District officials and patrons had expressed concern about the building’s cramped quarters and condition for years. Tulsa World archives show that in 1976, Frenchie Loving, director of the West O’ Main Improvement Association, said the building, “aside from being too small, is a fire trap, too.”

Danny Wasson, who lives three houses away from Riley, said the boarded-up school has been a common target of vandals and a popular night-time haven for homeless people recently.

“Police have been called there several times to get people out that wasn’t supposed to be there,” he said.

Riley is among properties that are scheduled to be acquired by the state for the extension of the Gilcrease Expressway, said Bill Cyganovich, the city of Tulsa’s lead transportation engineer.

The extension would connect west Tulsa to Interstate 44 and the Keystone Expressway.

Plans call for the route to start at I-44 and West 51st Street, then head north and east of 57th West Avenue, which it would parallel until it crosses the Arkansas River. It then would continue north to the Keystone Expressway, while running east of Terwilliger Park and atop 57th West Avenue.

Officials said the 82-year-old vacant school building was being used for storage.

Can’t believe it’s been this long .I remember when I lived on 10th Street next to Tewillager Park walking up the hill every day to go to school .Many good memories wish Riley was still there to visit and reminisce ,Mr. Jackson . Miss Metsker,Mr. Gregg ,Miss Moran, Mr.Clark ,Mr. Yost.

Also, in the 1960's we used to have bomb drills where everyone would have to go into the main hallway, get on the floor in the fetal position and cover our heads with our hands. I wish I could remember the teachers name, she taught 3rd or 4th grade back then, and I used to know it, she was a strict teacher who would slap you on the hand with a ruler, but she was truly a great teacher.

i went to this school when i was young the small little building by its self on the right side was for indian children to take classes and learn our heritage when you walked to school across the street you had to walk through a under ground walk that everyone would stand and hit you or make fun of you when you walk through…the school was cold durning the winter and hot as could be during summer…i really dont miss that school….at night you could hear alot of sounds under ground when no one was there nobody really liked going… Read more »

I went to Riley in the 70s and to see the school in this condition really made me sad! I do remember Mrs. Metsker, Mrs. Moran, Mr Gregg,! It would be super cool to run into some old friends or one's I was in the same classes!

i drove by there just today and it had been removed. i remember when it closed i was going to mark twain at the time they moved the student and i lived just down the street till 91.

does anyone know where Mr Gregg is now?

The school is in Tulsa, not Sand Springs. Some of my best school memories still come from my time at this school in the early 70s.

Thats exactly right. Its in Tulsa not Sandsprings!! lol. I went there in the 70s. Lived only a about 2 blks away. 1131 S 58th W Ave. Walked up "Riley HIll" many many times. Good memories.

This is a very sad outcome for one of Oklahoma's (certainly very old) school buildings. I drove by this building every morning on my way to school up until weeks ago–the last time I drove by must've been three weeks before this Christmas. They've begun to tear the building down; it's heartbreaking to see such an artifact go to waste. If anyone has any old stories about the place, or contact information for alumni/ae, I would be very appreciative. I feel like this is just a little slice of history going to waste and would really like to learn more… Read more »

I feel this is among the such a lot important information for me. And i am happy reading your article. But want to observation on few general things, The website style is perfect, the articles is really great : D. Just right job, cheers

Wow, how sad. That old building has been thru a lot over the years. Hate to that it's going to be destroyed. But it's better than letting it sit and rot away.

My Mom, Uncle, and two aunts went to Riley. They lived down the hill and around the corner from there, in the neighborhood that was taken out. I played there as a little kid. It would be cool to meet someone on this site that knew them. Their last name was Durant. Thanks!

Wow, this is too cool. Went to Riley from 55-61. Miss Morgan all the way to mr Herring. Some great memories with Jimmy Don Ward, Tommy Thompson, Mickey and Sissy Miller, on and on. This past summer I went ot the funeral of Billy Howard, after all of us were sitting around Linda's house we realize why is it that we see people only at funerals, that is why this past October we had the 1st annual Mayfair addition reunion. So to any of you who were raised on 1st,2nd,or 3rd street are invited to our 2nd annual reunion, time… Read more »

hey jb…………good to see you here………..a nice place………..really enjoyed the mayfair reunion………hope to do it again and many more old freinds will join us there……..thanks for putting it all together………..

I forgot to mention. Does anyone remember the Kindergarten teacher's name for the class of 1955-1956?

Mrs. Hobson was the kindergarten teacher then.

I started Kindergarten at Riley in 1955 and went through the 6th grade. I lived across from Charles Page Blvd. so I was lucky (or unlucky) enough to get to travel through the famous underpass everyday. Through the years I have remained in contact with many classmates; Pam Hix, Phyllis Copeland, Karen Cherry, Kenny Hancock, Nancy Stollemyer (just to name a few) and we love sharing our personal Riley memories. I even married Paul Varnell who started Riley in 1954.

hi jodie lasater varnell…………….i met you at the mayfair reunion, i was the big ugly guy, but i didnt see any small good lookin guys, so take your pick…..ha……..anyway, you gave me garys phone number and i was able to contact gary and we had a good conversation…………..hope to see you again, and gary and paul, at the next reunion. remember when the tunnel was our tornado shelter, by time we walked to the tunnel from west 3rd people were standing out side, the tunnel was full, so we stood outside in the rain like geese and watched for the… Read more »

Didn't see my last reply on here yet so I will try again. Dennis I do indeed remember all the good times at Riley. I thought Mrs. Brinkly was Mrs. Brink and Mr Harrington was Mr. Herring. Could be wrong though because is has been a LONG time. Ricky is in Tahlequah, and Susan our sister is in Sand Springs. We lived on west 12th street and walked to school every day. I still talk to Gary Varnell on Facebook once in a while and Joe (Chris) Rask also. We lived next door to Sandra Madden and yes I think… Read more »

hello ron pry, this is dennis white,…….such a wonderful surprise when i revisited this site and guess who……ron pry and gary varnell. you may remember me mostly from cub scouts. My mom was a den mother. I can still see the scoutmasters face, cant remember his name. want to say mr. roberts. Do remember joe rask……….what happened to sandra madden? no surprise she was the heart throb for others too. ron, our paths have crossed so many times……..went to neo in miami, picher was part of our tromping grounds, my room mate went with the, at that time, mayors daughter.… Read more »

Hey Dennis Yes I remember Mr. Roberts. He had a son Bill who was in scouts also. I taught at Picher from 83 to 89 and then we moved to Vinita. We don't get back home much but that doesn't me we forget everyone. Don't know about Sandra. I knew they moved to Porter I think a long time ago. She had a brother Rodney. Those were some great times at Riley. You know Mike Warmer is no longer with us. I remember Mr. Varnell and Mr Warma coaching us in baseball. My Dad also coached a couple of years.… Read more »

Oh, I forgot to say that we live in Hewitt Texas. I retired from teaching (Band) after 29 years in Oklahoma the last 16 at Vinita, and we moved down here and I am still teaching band, but Oklahoma will ALWAYS be home to us

I went to Riley in the early 50's from 2nd grade on. Some of my teachers were Mrs. Cartmill, Mrs Belt, principal was Mr. Van Noy. I still can't figure out how he got those quarters out from behind our ears during recess, haha.

I remember during my 6th grade year being on safety patrol and the rumor of the "Monkey Man" living in the tunnel under Charles Page Blvd.

Those were the good years of Little League Baseball.

Would love to hear from friends from back then.

hi gary……good to see and hear from you……..spoke to you, by phone, afew weeks back.. we played little league ball together, I remeber your dad and mr. warma so well. I either played short or caught, when you didn't . at riley with you and thru the 8th at madison, still playing ball and watching jack carter loft every thing over the fence. graduated dwhs in 65, with your spouse……..a small world. also was a safety patrol, was so proud of that white belt and badge……..also the monkey man in the tunnel. hope you can make the mayfair addition reunion… Read more »

😀 i went to Riley in the late '50s. I moved after the third grade. I can still remember recess. And I still have my report cards. I would like to know what junior high and high school my classmates went to.