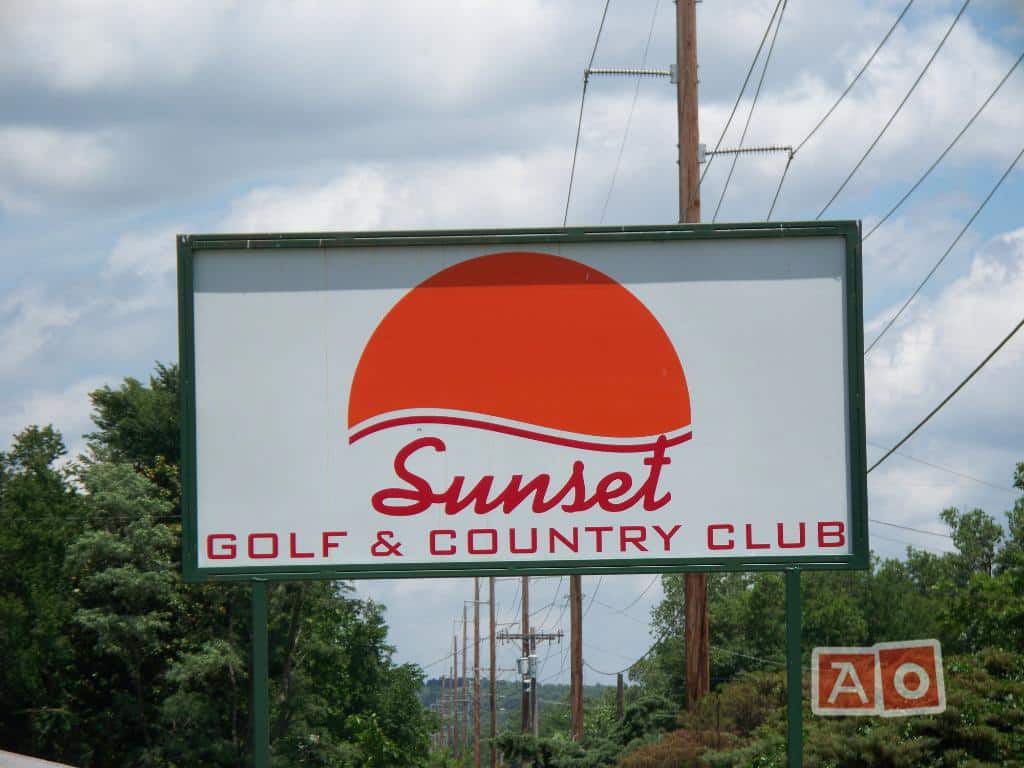 Sunset Country Club had been a fixture of Bartlesville for over 70 years, described by those who were familiar with it as having a laid back, family golfing and recreational atmosphere…

“It was my course,” said longtime Sunset golfer Brian Saltzman. “You felt like you were at home out there. You knew everybody.”

That friendly atmosphere was what made the 150-acre property, located near the Bartlesville Municipal Airport, so special to its former patrons.

But harsh financial realities have hung over the golfing destination since the turn of the millennium.

Dwindling memberships and rising maintenance costs combined with other factors to create too much of a strain on its owners to keep it going, much to their dismay.

“When you’re spending a lot more money than you’re raking in, at some point in time, you gotta say enough is enough,” said Harold Bredthauer, who managed the course — alongside his wife, Joy — for over a decade.

A quick google.com search will indicate that Bredthauer may not be alone with the problems he faced. Courses all over the country have been closing over the past few years for various reasons.

A 2008 msnbc.com article by David Sweet says that the last few years have been especially tough on the golf industry, and that “the golf construction boom of the 1990s — when about 2,500 new courses (mostly daily fee ones) were added to the 13,000 or so already existent in the U.S. — is not only over; it’s stuck in reverse.”

“The play got to where we couldn’t keep it afloat. It was about five or six years ago when it started going down the tubes,” he said. “Times have changed.”

By 2007, Bredthauer had put Sunset on the market. Buyers were hard to come by until the City of Bartlesville approached him in the fall of 2008.

As of last week, the city closed a $980,000 deal to purchase the property that had been a golf course since 1928 — when George Wilkie built a three-hole course to practice on.

Wilkie eventually built more holes — when neighbors found out and wanted to join in — and by 1947 had opened an 18-hole country club .

That land, rich with tradition and memories, will now be used for an industrial park — something that most of Sunset ’s former patrons realize will be a good thing for the city, despite their sadness for the fallen landmark.

“I’m going to miss it dearly,” Saltzman said. “The city needs the space for the industrial park, but it’s just sad that we have to lose a course in order to do that.”

Saltzman began golfing there close to 50 years ago, when he was 10 years old, and has many fond memories of his time on those links.

“My parents were members,” he said, “So I was out there playing, and worked out there through high school. I’ve been out there a long time.”

The family atmosphere of Sunset was something that made the course special to Saltzman and many others who played there. Over the years, Sunset was host to numerous special events, including a Halloween-themed night golfing extravaganza that saw kids and adults alike dress up to have a good time.

“That was one of the memorable things we played,” said Larry Thrash, who served on the board of directors over 15 years ago and often helped plan events. “We had a fun time.”

It was always different from Hillcrest Country Club , a more exclusive place that fewer can afford to play at, or Adams Municipal Golf Course.

“It was what I would consider a ‘blue collar’ country club ,” Thrash said of Sunset . “They had a lot of events, and there was always family involvement.”

It became open to more people when Bredthauer took ownership from the Wilkie family in the late 1990s and soon made it accessible to the public.

“(Mike Wilkie) was up here trying to run it by himself and he couldn’t do it, so I made him an offer and he took it,” Bredthauer said.

He tried to keep the same atmosphere that made Sunset so special, but money was an issue from the beginning of his tenure.

“Over the years it’s been great,” Bredthauer said. “We had a lot of fun out here early on. As things started going down hill, we had less and less participation. It just kinda died on the vine.”

“When you start losing money, at some point you just got to bail out,” he added.

Copan golf coach Jason Collins remembers some fun times over the past three summers during practices at Sunset .

“I hit a hole-in-one on hole number five during a practice,” he said.

A better watering system, Collins said, would have helped the course’s struggling greens, but he understood the financial difficulties that were a big culprit for the problems in the first place.

Despite the sometimes-rough grass, he liked t he laid back atmosphere of the course, as did many others. He said practicing at Adams can be crowded.

“It was more relaxed and easier to get around out at Sunset . It’s just different. Adams has a lot more traffic (now),” Collins said.

With Copan, Dewey, Bartlesville, Oklahoma Wesleyan University and others all needing space to practice, an extra course was appreciated. Now they all have to cram in to Adams, fighting for time with the rest of the Bartlesville golf world.

“You could just walk out (to Sunset ) without worrying about tee times,” Saltzman said. “Adams has more traffic and therefore takes longer to play.”

For most of its history, recalls Saltzman, Sunset had been a private club for the working class golfer who took the sport seriously.

“They were more dedicated golfers,” Saltzman said. “The people who played every now and then went to Adams. The people that loved to golf went out to Sunset .”

His parents were members, and like many others, worked for Phillips Petroleum — ConocoPhillips as it’s known now. It was like family, he remembers.

Thrash started playing there later, around the mid-1980s, but his memories agree with Saltzman’s. Thrash is going to miss the times spent with others out there the most, even with the issues the course had.

“As with any golf course, you’re going to have complaints,” Thrash said. “Nowhere is perfect. But we had good people, everybody got alone. We had some good groups to play with.”

Bredthauer will also miss that aspect of Sunset ’s history.

“There’s a part of me that really regrets that fact that we couldn’t keep it going, but at the same time I was getting really worn down,” Bredthauer said.

“They were all good friends. You could come out anytime, we didn’t require tee times,” he said. “It was just kinda a family atmosphere. A lot of the people are very sad about the fact that Sunset is going away.”

Thrash and Saltzman both are.

“It’s sad to see it go. Sad to see it become an industrial park,” Thrash said. “But things change.”

Adams and Hillcrest may be the only two golf courses in town now, but for those who partook in the magic of Sunset through the years, its impact on the city won’t soon be forgotten.

Thanks loads for sharing us about this replace. Hope you may no longer get tired on making posts as informative as this.

I took swimming lessons there, because the Phillips pool had too much chemicals.
Wish there was a pool picture.

Monumental to be here. I satisfaction lot accompanying additional approximately this. Acknowledges.

Awesome post. So fine to discover anyone with some particular mind in this situation be counted. I will recommend this submit to my buddies. Thank you for sharing.

Man, what a crazy story. I'll probably share this with some of my friends. Thanks again for posting it.

Sad to see such lovely country clubs for golf communities getting shut down due to financial difficulties. Good article, nevertheless.

It's nice to know that Sunset Country Club had an effect on people bring back the times of family golfing and recreational atmosphere. This would be good for many.

Hi knew alot good golfers that played there and miss playing there myself lve lived here for 40 yrs said its gone adams is very. Good place 2. Play also tulsa got alot say. Hook up. With freinds and have fun. Golfing. Dave Williams

I live across from the fairway. Pretty sunsets. The greens building burned down about 6 months or so ago. It has been razed. I think that someone torched it.

I live across from the fairway. Pretty sunsets. The greens building burned down about 6 months or so ago. It has been razed. I think that someone torched it.

My dad was an avid golfer here from 1960-1990. I learned to swim at the pool when I was three and had many great summers. My mother found it cheaper to leave me at the pool than send me to day care during the summer. The life guards were great baby sitters. I have many fond memories and am sorry to see it shut down.

I learned to golf on this golf course. My grandpa was a member here for years. Its a shame to see it in the condition its in now, but to be honest, the course pictures aren't far off from the last time I remembered golfing there. I think I probably hurt my grandpa's feelings after I graduated college and commented that we would have been better off golfing in a pasture, from the way things were maintained. I know a lot of the golfers there (my grandpa included) loved the course, but the management wasn't great, as a matter of… Read more »

Joy is my grandmother.I grew up on the golf course, and I just really want to say thanks for taking the time to document what a great course it was.