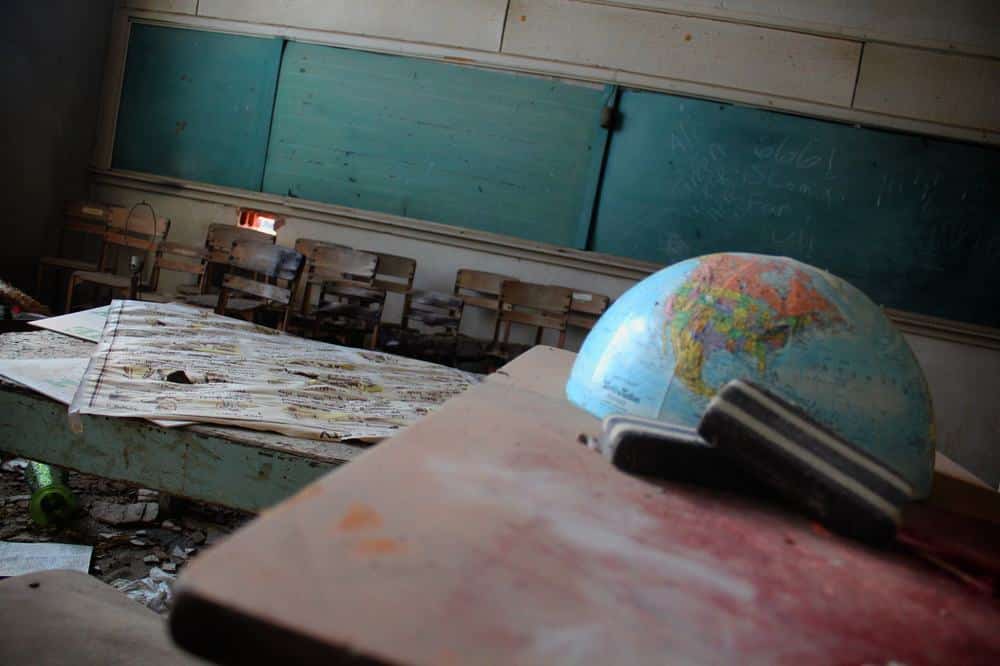 What happens when entire schools are forgotten? As is increasingly the case with the now-abandoned Skedee School.  First constructed of wood in the year 1906, the original school was replaced by a more sturdy and larger school building in in 1924. which was surely the sign of a robust and rapidly expanding community back at that time.  Located northwest of Tulsa and in the northeast corner of where two rural country roads cross, the Oklahoma town began to struggle and the population began to dwindle.  This began a sad rend that continues in the making, too. The 2000 federal census showed  Skedee to have a population of  102 people, 38 households, and 22 families residing in the town. This had dwindled all the way down to a population of just 51 by the time the 2010 census rolled around though.

Skedee school fell victim to the community’s gradual decline and the country’s transition toward consolidation over four decades ago, closing in 1967 as the educational systems of Skedee, Ralston, and Pawnee were all three merged together. To look inside the remnants of the long-deserted Skedee school one sees an entirely different view that’s sadly is far more along the lines of the theme of decay and abandonment that’s running with ever more increasing abundance throughout our country and land.  Of all the pictures taken within this album, perhaps the one of the classroom best represents what remains of the school today. The shattered remains of a globe resting in the abandoned hulk of a school where the world itself stopped turning over 40 years ago.

So much time, so many people, so many memories and it’s all still there somewhere. If only in the minds and hearts of the ever-dwindling number of Skedee school alumni and town residents that can still remember and recall them…
Gallery Below

DUDE! I am so excited right now after reading this! Thaaaaankkk you!

i got lots of information from this site.thanks

Who owns this and is this property for sale? One of these days, I am looking to open a school of my own and would like to bring it back to life.

In the census of 1940 a teacher is listed by the name of Fern Linck. she is living with Nora Carmon and Margery Peck. Fern is 25, and living on Lemert St. If anyone knows of this woman PLEASE contact me.
Bvl54@aol.com She had a brother George S. who die in Pawnee in 1967 and a sister Faye who married a John W. Swofford in 1945. George is buried at Red Rock Cemetery. Please help if you can. This is for family genealogy.

is it for sale

Could you tell me who owns the property and how I might be able to get in touch with them?

Here is a night shot I took a few months ago inside the school.
http://www.kapplemedia.com/wp-content/uploads/pho…

Are you able to go there now to take pictures of the town and buildings?

Thanks for documenting this school, some nice memories here. Appreciate your efforts!

The statue on the crossroads of main is amazing!

Incredible pictures! I can almost hear the laughter of the children and the teachers giving their lectures. Thanks for sharing. I really enjoy this website.