Photo Galleries at End of Article

Sparks, Oklahoma lays on land that was once part of the Sac and Fox Reservation, which was dissolved in 1890 when the principal chiefs signed an agreement with the Jerome Commission that each tribal member would receive 160-acres. The remaining land was up for grabs during the land run on September 22, 1891. William and Tabitha Baker were one of the firsts to homestead the original townsite, which was made up of 186 acres. In 1902 the Eastern Oklahoma Railway and the Fort Smith and Western Railroad had plans for a town at the junction of the two lines. Thus Sparks, Oklahoma came to fruition, it was named after George T. Sparks, an FS&W director. Sparks’ post office was established on August 30, 1902, and the town soon gained many businesses and settlers.

Mainly a farm town the townspeople were met with unstable living situations when prices fell during the Great Depression. Many citizens started moving to towns with a more stable economy and more job opportunities. In another blow, the railway services left in 1939 and other businesses closed. The town went from a population of 503 in 1907 to just 339 in 1940. The population only continued to decrease over the next few decades causing Sparks to lose its high school in 1957 and its grade school in 1993. The towns’ population has dwindled to just over 150 and the only remaining establishments are the post office, First Baptist Church, and the community center located in the old school. 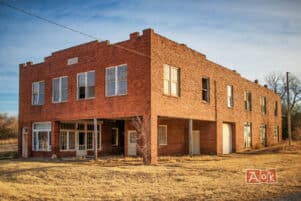 One of the biggest buildings left in town is the Sparks Lodge No. 316 for the Masons. The large two-story brick building was constructed in 1926 if you look up when standing in front of the building you will see a stone block that says Sparks Lodge/A.F. & A.M. No. 316/1926. According to a local the lodge held meetings here until the seventies or eighties.

Though the whole building was not used for the lodge, the downstairs was occupied by Clay W. Nixon & Son. Clay Nixon & Son was a service station and garage in Sparks throughout the fifties and sixties charging 50 cents per hour to use their tools and space. It once contained a gas pump bay for the service station. Within this first floor, there is an overhead door leading to the back service area where cars could pull in, as well as a small office.

Looking at it now this building is easy to pass by without looking twice, being just a shell of stones and covered in foliage now. Sitting right off of main street this building used to be the bank, facing northwest was the entrance The main entrance is canted at the northwest corner of the building. All doors and windows are boarded up and the building is not in use at this time. Above the entrance, the roofline presents a small gable, saying 1905 BANK in stone. This style and year were widespread for banks being built in Oklahoma. The contract for the Farmers & Merchants Bank was given by President Emmerson to M. Morgan of Chandler for the stonework and H.C. Hughes for the framework. It would be a two-story, native stone structure and located on the corner of Main and Broadway. The institution was chartered, inspected and endorsed by the State of Oklahoma making it ready for business.

Shortly after being constructed the bank became a target for bank robbers. Below is a newspaper snippet highlighting one of the robberies:
The Stroud Messenger 26 Oct 1906 – This morning about 2 o’clock a band of bold robbers dashed into Sparks and proceeded to blow open the safe in Emmerson’s bank. There were several of the robbers and they shot up the town while engaged in the work. After blowing open the safe and securing the money they rode away. Lincoln County officers were immediately notified and Deputy Buzzi, Ray McElhinney, William Taylor and Joe Martin left for the scene of the robbery. An engine was dispatched to Shawnee for a pack of bloodhounds and a vigorous effort will be made to capture the robbers.
On January 21, 1914, the Farmers & Merchants Bank of Sparks changed hands from E.H. Emmerson to Leo Hughes of Ada. Like many banks, the Great Depression took them under and many presidents had to sell and close their establishments. The Farmers & Merchants Bank changed to a national charter and moved to Tecumseh on August 26, 1938, keeping the same name. While it is suspected that this building was occupied by another building later on it is unknown by what. It has sat abandoned for decades with an earthquake in recent years knocking down most of it. “I tried to haul off the safe out of that old bank. A lady across the street who owned it said I could have it if I could get it. No such luck, it was too heavy and it was in the middle of the lot!” said Arnold Kennedy. 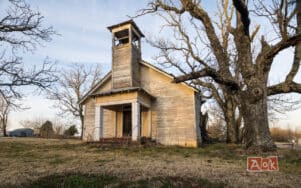 The popularly photographed church in Sparks has seen numerous better days. It now sits empty, a relic of its former glory as the First Methodist Episcopal Church. The cornerstone states the year it was built as 1923. It’s a white chapel building with a main sanctuary and belltower. Linda and Reba Holland reminisced on their times as flower girls for many funerals there. During the 1960s the church was run by Rev. Opal Selph, a local in the town. It’s estimated that the church stopped being used around the 1990s. The sanctuary has since caved in on itself after a tornado came through, sealing the fate of the church forever it can not be saved now.

“This church is owned by my cousin Kirk Davis and lives just down the road from it. He put an enormous am out of work into this building when he bought it. Unfortunately, it was already too far gone” said Jacky Seward.

The small building that once held the drunken and petty criminals of Sparks looks more like a rundown shack than a jail now. Made of stone blocks it presents itself with a slanted roof and only one small window in the back. The date it was built and abandoned are entirely unknown as of now.

Gallery Below of Sparks, OK

Excellent work! Thank you for sharing