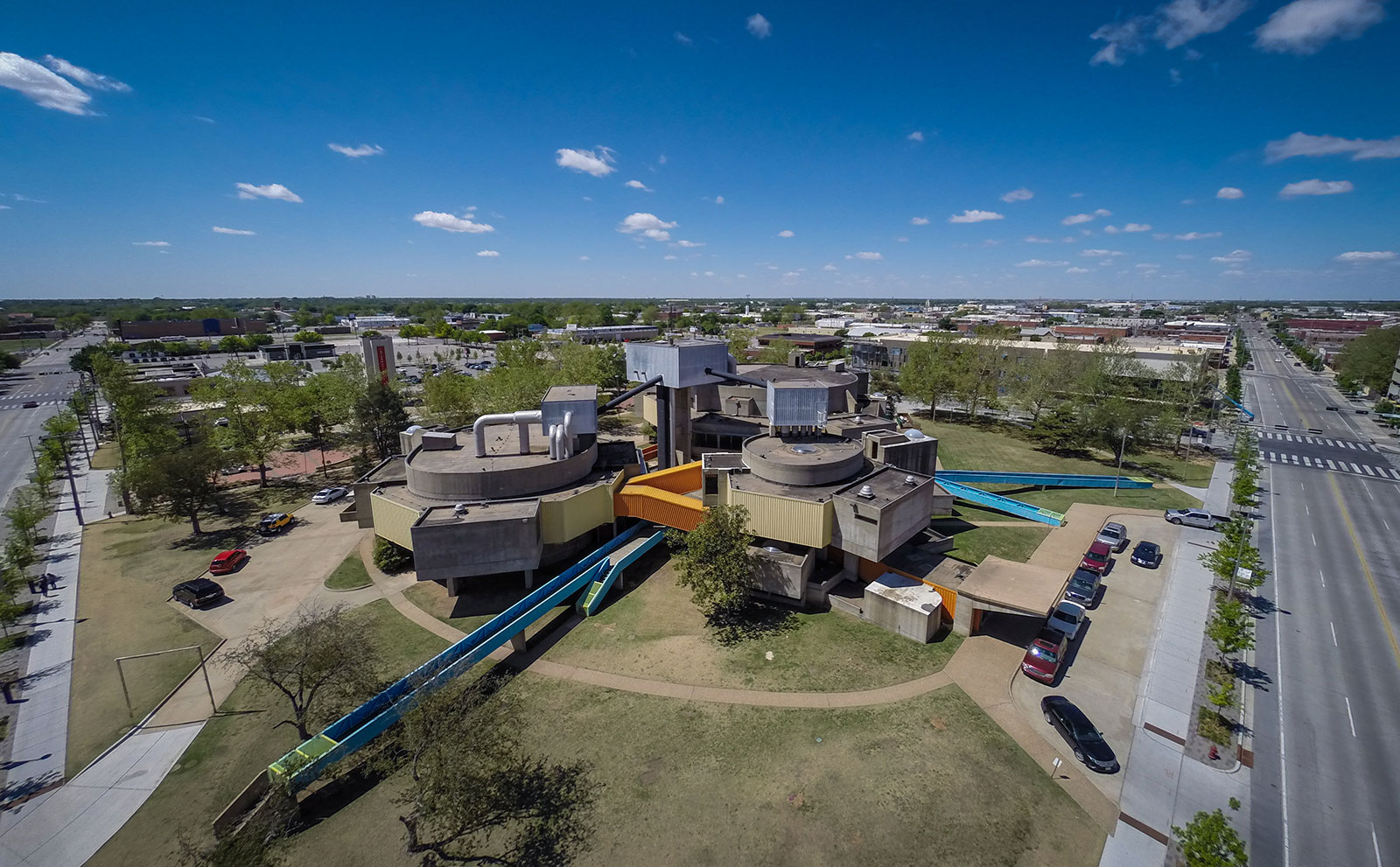 After years of debate over the history, importance and fate of Stage Center, the end is set to start Monday (6/30/14) as preparatory demolition begins next week.

Stage Center, originally known as Mummers Theater, was designed by John Johansen, a student of Frank Lloyd Wright and a member of the legendary “Harvard Five” (which also included Marcel Breuer, Landis Gores, Philip Johnson and Eliot Noyes). He was hired not by the Mummers Theater, which was to be the tenant of the Oklahoma City venue, but by the Ford Foundation, which agreed to provide a $2 million grant for a modern downtown home for what was then a 22-year-old theater company.

City leaders, however, were unhappy with Johansen’s brutalist design, which called for a building turned inside out.

The theater opened in 1970 to international acclaim for the design, but inadequate funding for operations and a less than enthusiastic response by locals led to the demise of Mummers just a year after the theater opened. The building has had a series of tenants since, was closed in the late 1990s, and closed again for good after it was flooded in 2010.

Gallery Below of Stage Center

Regardless of all the negative comments posted I am saddened to see this one of a kind building gone. I spent many hours in that building as a Volunteer running the sound and light boards in both theaters. The beauty of both theaters was how close the actors were to the audience. Yes it had issues from day one and it is sad Mother Nature brought its final demise. I will miss it and it makes almost cry now to see dirt where it once stood.

where are or which ones are the photos of (the inside of) the long yellow hallways? the ones that kinda look like steal containers.

I attempted to perform in the 'Tinker Toy' on several occasions. What a monstrosity! It was a public relations stunt that went terribly wrong. Clearly, no consideration was given to the needs of the performing artists. They hoped for support from people who didn't know squat about a practical, realistic facility. Glad to see it's gone!

Well. The building seems to be in such a bad condition, since 1990s it has gone thorough so many changes. I wonder how they may manage to heat such a building which was flooded.

That's a shame they couldn't restore the property. It's tough to let go of such an interesting piece of OK history.

I have to admit that Stage Center was an unusual landmark!! However, I'm not really sure what it was good for. Certainly not the purpose it was intended. The seating was strange, the acoustics did not exist. Hot in the summer, cold in the winter. It had moisture problems from day 1, and I'm not talking about the flood that ultimately lead to its demise. On that morning several places that had never flooded before flooded. Leave it to Oklahoma weather.

I attended a pro wrestling show there in 2005. Very unique building, architecturally speaking.

What caused the flooding in 2010 that closed it down?

8" of rain in one morning in June caused the flooding

The building closed the second time in the late 80s not late 90s. In approximately 1990, There was a renovation and redesign of the basement office area and other spaces in the basement (for example, the scene shop was converted into a dance studio), as well as improvements to the arena theater.

What a monstrosity that should have never been built like this. As a theater center it was a total FAILURE from day one. It was virtually impossible to get equipment/props into and out of the facility. The acoustics SUCKED, you got better sound from a gas station restroom. Seating was atrocious and uncomfortable. Heating and air conditioning it was a nightmare and once the concrete heated up in the sun it would be sweltering inside. I cannot say even one good thing about this Tinker Toy Disaster except to say thankfully it is gone. The number overwhelming folks that put… Read more »

Well, one of my good friends father was the architect that designed this building, as much as a pain in the ass as it was, it's apart of my childhood. We held numerous dance recitals here and I attended many plays put on by high school theaters. You're right about it being a pain in the ass at times, but it was apart of downtown, apart of okc, and apart of everyone's lives who utilized it. It's like the drunk uncle at family reunions, he was obnoxious, but the family reunion wouldnt be the same without him.