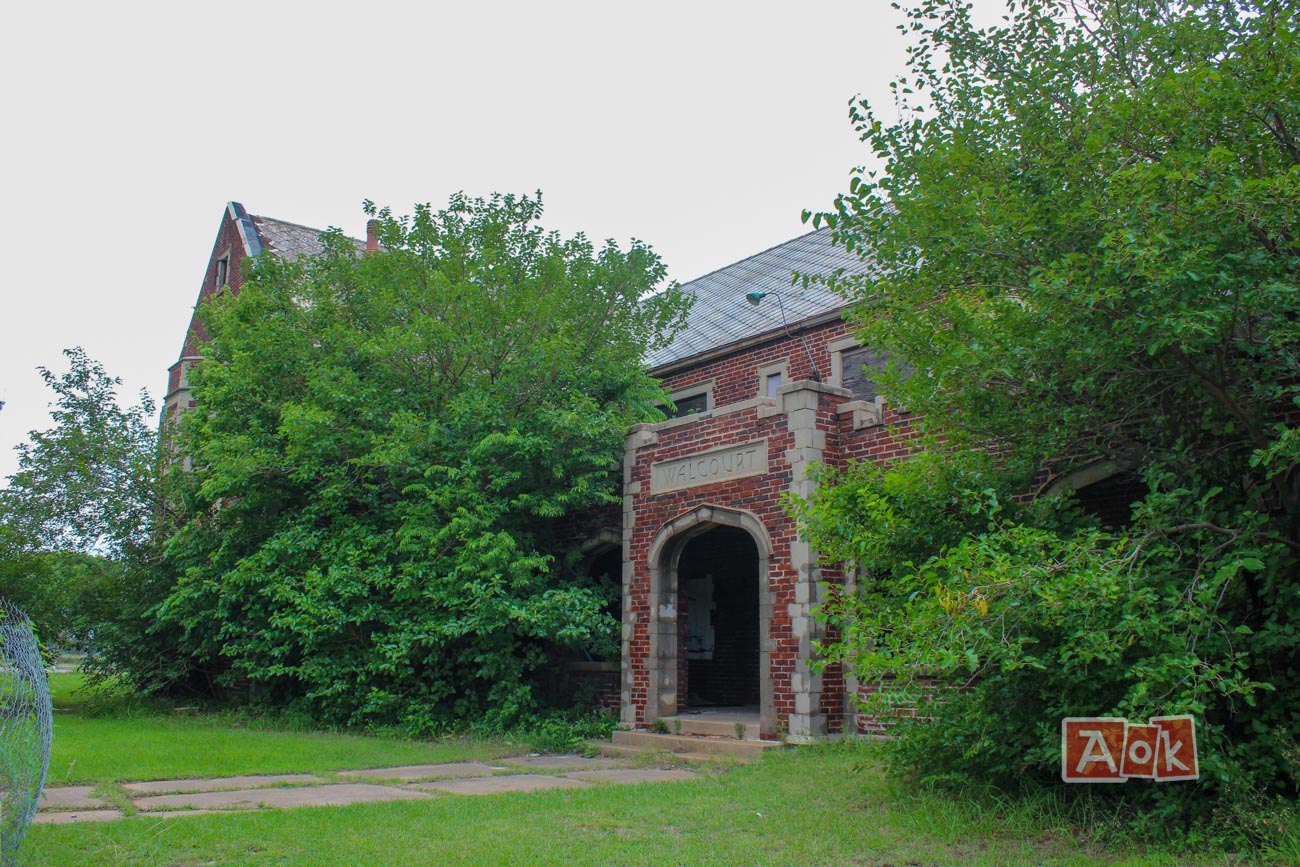 In our ever expanding world of Architecture, nothing will ever compare to our historic buildings and the feeling they provide standing in their presence. The Walcourt for instance was designed like nothing else around it when constructed in 1927. This was because the owner, H.E. Musson asked arhitect, Joe Davis to design an apartment complex like no other in Oklahoma City, and that’s exactly what he did. Davis and his building, Charles G. Beveridge decided to go with a Jacobethan Revival style. Just looking on the outside, there is a sense of elgance with its red common bond brick and contrasting cast stone.

“The steep-sided triangular silhouette of the gables the use of stoner in combination with brick, for window and door framing, parapet and quoin trim and other Ornamentation; Tudor arches and chimneys with octagonal “pots”; all these features are symbolic of Jacobethan Revival style architecture.” – Bill E. Peavler, Senior Preservation Architect (Oklahoma Historical Society)

Musson was a Professional Engineer and exceedingly proud of the innovations in the Walcourt. Not only did it cause a wow factor on the outside, but in a full page announcement on the opening of the building he mentions the “Kohler” fixtures in the bathrooms, “Clow” gas-steam radiators for heating, lots of windows to take advantage of the natural breezes and the convenience of living close to the State Capitol. There are no out-buildings related to the structure, only single-family houses provide a backdrop to this architecturally interesting building.

Because the Walcourt was situated a few blocks from the bustling State Capitol, it was considered prime space for, the powerful, statesmen, successful oil men and others of independent means. Efficiency accommodations as temporary housing was considered as more than suitable to their positions, in business and government.

If you wanted to live at the full furnished Walcourt in 1927, you’d be paying $50 a month, which by today’s rate would be equivalent to $798.70 a month. In 1931, another ad in the Daily Oklahoma shows that the price in rent was reduced to try and attract new tenants and business was going strong for the Musson family. In the 60’s the Walcourt went through some decoration updates and offered continued to advertise a fully furnished set up to keep up with the times.

There was much to climb in the 1970s and a wave of urban renewal that demolished a lot of buildings in Oklahoma City. Is the new I-235 interstate gobbled up a lot of homes in and properties in its acquisition area, but thankfully missed this landmark, by a small hair. In 1976, John H. Williams bought the building along with an acre of surrounding property. He then worked with local preservation list preservationists and by 1982, the Walcourt was listed on a national register of historic places. The building was closed during Williams’ ownership for redevelopment, and unfortunately those renovations never came due to his death. His 2nd wife, Mary Williams became the new owner and then had a long history of refusing to sell the property. For the next several decades, she had offer after offer of developers who wanted to buy the building, and never agreed to a sale Because she thought the magnificent building would be worth a lot more in its run down state as time moved on.

At about 7:30 PM on July 9th, 2015, A fire broke out on the North side of the vacant building. Luckily firefighters were able to put out the fire in 12 minutes time before the damage was caused any real issues.

Inside we managed to find a few old slides that contained pictures of families and people living in the Walcourt. If you happen to know who is pictured, please let us know! Here are the slides we found:

After sitting boarded up for nearly 40 years, the Walcourt was finally purchased in 2017 with the intentions of restoration! It was purchased by Residential developer Brent swift, who cleaned up the property and immediately started design work. By Thanksgiving of 2017 It was already discussing other potential buyers to take over the project. Walcourt partners LLC led by Steve Morris have miss had previously tried to buy the property from Mary Williams when she was not selling, But later purchased the building from Swift. Plans to reopen the former Walcourt apartments are steadily underway, and They will be used as office space. Many of the eye-opening and historic structural features have been saved and, even the branding of the office space, fits the original look and feel from 1927. The Walcourt will once again be the “most interesting” building in Oklahoma City.

James, are you a part of this project? We would love to do a success story video on this beautiful building, it’s history and renovation. Please let me know! schwarzcreative@gmail.com

Until the family decides what they are going to do and the court agrees, it willl sit and rot. It's a shame greed and hatred for one another stifles potential greatness for all.

I have read somewhere that there have been several attempts to buy the old Walcourt, but the owners have refused all offers.

I lived in this building in 1965, it was awesome, so sorry that the owner will not sell or fix it back to its glory days.

Hi, why is this building called Walcourt?
Greetings from the village Walcourt (Belgium)

This old building is just beautiful! I am amazed that a lot of the wood is still in such good condition, would give anything to have some of those doors that have the dark stained wood in the center, even though the outside edges have been painted, they could always be stripped down and stained. And the staircase, love, love, love it! Thanks for posting the pictures, it is a shame it is just setting there abandoned.

the mail for the owners of the building go to an address where they don't live. The deed changed hands in the 1970s so the owners are most likely deceased and it's in the hands of a trust now.

I love this old building. I drive by it periodically and wish I had the money to buy and fix it up. It is beautiful. I am always amazed someone has not done that already.

One of my colleagues sent this link to me since she knew that I and another colleague went urban exploring there about 10 years ago. We were able to see some of the things but not all. We were met by a man that asked us to leave. He said he was hired to "watch" the property (I think he lives nearby). We asked if it or the home next to it were for sale. He said that the lady that owned them thought about restoring them but was not interested in selling at the time. It would be a… Read more »

I was so glad to find these photos. I have been intrigued by Walcort since I first saw it. So many people I know are. Everyone just wants to have it returned to it's former self. Have the owners ever said why they haven't done anything with it or sold it? Just curious if anyone knows. I am sure it would be a HUGE expense to refurbish. But so worth it.

My mother in law just showed me this place today. We kind of snuck past the gate lolol. I love seeing abandoned buildings, I wish I could have them all, history is love.

I work nearby and pass this building often. Would love if someone would purchase and restore. It's beautiful.

The bank doesn't own the property and since it's not on the market for sale, there's no need to contact a Realtor.

How the hell would you know MeeeeShelle? Do you have a real estate crystal ball?

[…] year was 1982, and The Walcourt of Oklahoma City was added to the National Register of Historic Places for its interesting […]

I would gather from the near expletive signage outside and what looks like removal of many if not all of the brass/copper fixtures in the building that they had a couple bouts of theft and breaking and entering. A little tagging here and there, i could imagine the owner if she ever saw it, had alot of heartbreak when these events happened and hasn't had the time/interest in recovering from it. I'm no expert (besides being an armchair general contractor) but i'd say at face value there needs to be about 250-300 thousand dollars invested to meet code, especially to… Read more »

Good stuff man, I visited this building with my girlfriend yesterday and noticed the lead paint, I made it a point to put our noses in our shirts during our exploration. People need to know this.

I wish I could buy this place. I want to fix it up. But I would want to turn it into my own personal house.

How did the place go downhill so fast? From what I read, it was open into the 70's- why does it look so gutted and aged? I have seen other places abandoned in the 70's that looked in better condition 🙁

How did you get permission to get INSIDE there??

Thank you for taking these pictures even though they made me cry!! I've done a lot of research on this building and have been drawn to it since I was a small child. My husband and I have written letters asking if the owners would be interested in selling it, but have never gotten any reply. I would love to fix it up and make it beautiful again like it was back in the "old" days.

Wow I wish you could! Why would you not want to sell if it's just sitting there deteriorating.

Tracy, I just happened along this website and read your comments regarding the Walcourt building. I do have some information to pass along to you and your husband if you are still interested in possibly purchasing this particular building. If you are still interested, please contact me via email at cmeshelle@yahoo.com. My name is Meshelle Clipper I would be more than happy to put you and your husband in contact with the correct person.

The evidence of painting creeps me out. It's like they started but then abandoned it again. Have you heard anything about that?? I love these photos. Thanks for posting!!

The Shasta can is from the 1970's. The family photos (clearly at Christmas) are from the early 70's. You gotta love the old man's orange suit and white tie! I can't get over that Shasta can have sat there for 35 years. That's the kind of stuff I like to see here – little throwaway moments from generations past frozen in time. I admire Rex Garton's tenacity. Failing at being elected sheriff, he goes for Commissioner! I googled him and he still lives in Edmond, OK. A mystery to me is the recent painting and clean-up evident in some rooms.… Read more »

The baby blue phone caught my attention. Amazing stuff. Takes me back!