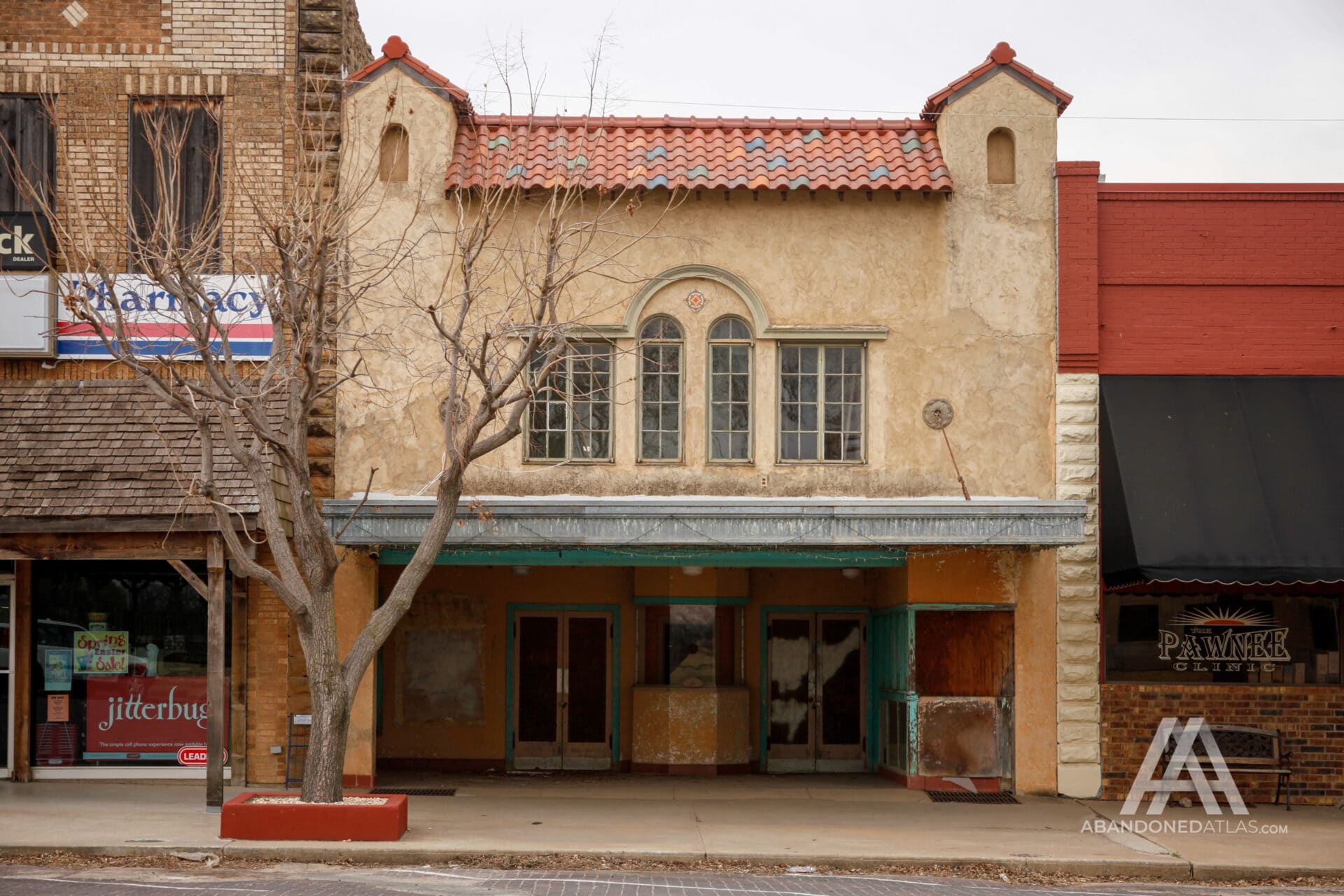 Constructed in 1894, this building throughout the years was depicted as “D.G & Milly” as well as a Hardware and Furniture store. But it was most popularly known as the Pawnee Dry Goods Co. that was branded on the front of the building. Owned by Gordon W. Lillie or more commonly known as Pawnee Bill. Him and his wife, also co-owner sold the property to fellow business partner and friend C.P. Rock in December 1913. This arrangement was only for a short period of time as he sold it back to the Lillie’s in February of 1915.

On August 4, 1921 gives the following excerpt is reported, “Also, the building occupied by the Courier-Dispatch has been sold to Mr. Emery Easley Ryan of Maramec, who will remodel the building and make it into a picture show house. He has a fine picture show outfit at Maramec and will move it here.”

After remodeling, the theatre opened and provided the community with many different showings. Some of the showings over the next year included: The Little Minister, Prodgical Daughters, The Devil’s Pawn, and many many more. The Class of 1923 celebrated at the Buffalo Theatre with the faculty for a line party and refreshments. Over the next few years the Buffalo Theatre embraced the citizens of Pawnee in bringing events and contests to the area. In February 1926 Pawnee’s first Charleston Contest was held at the Buffalo and hosted by the Southwest Charleston Contest Company of OKC. The contest is described as having dancers demonstrate two styles of dance, the ballroom “Charleston” and the “stage or eccentric” “Charleston.” Over $100 in cash and prizes were to be distributed to the winners who would then also be eligible to participate in the state contest. A month later a Fiddlers’ Contest was held for fiddlers from ages “25 to 100”. For almost a century now we have continued to have contests of submitting pictures of babies and the one with the most votes would take home a prize. The winner of the 1928 “Baby Contest at the Buffalo Theatre” would end up taking home $25. Second place would get an oil-colored 8×10 enlargement in a swing frame of their child, and the third prize would get a framed 8×10 enlargement.

The Ryan’s then mortgaged the theater to John H. Manning on June 19, 1931 for $2,500. The loan was completed on May 26, 1932. Under his management it saw many improvements and a huge remodel. A brand new modern cooling system was added to the building in 1933 for the comfort of guests boasting an “Arctic air blower and Sirrocco air washer”. Just two years later in late July an announcement was made to let patrons know the Buffalo Theatre would be closed for a few weeks to undergo a massive renovation. Work on these improvements started on August 1st starting with the front of the building being torn off to create a brand new facade. Smith and Senter Architects of Tulsa were tasked with designing the plans for the remodel. The front of the building took on a Spanish-Revival architectural look making it unique and stick out from the surrounding buildings. Old fixtures, equipment, flooring and chairs were all torn out and replaced with brand new ones. A small balcony was added to the back of the theatre for the best view in the house. People of important status would have been the ones most likely to sit here. It would hold a reopening event at the end of August with China Seas starring Wallace Berry, Clark Gable and Jean Harlow.

Mr. Emery Ryan passed away at the age of 78 in 1943 and the theatre was then passed on to his son Dana Ryan. Just a year after his death Bartholomew and Effie Lawson retired from the newsstand located in the lobby of the theatre that they had run since moving to Pawnee in 1928. Dana and his wife Burgenia ran the theatre together until February 1, 1960, when Milan Steele purchased it from them. Milan Steele was no newbie to the movie business having also owned the Lakeside Theatre as well.

The last mention of the Buffalo Theatre in online newspaper archives is in 1964. Perhaps a sign of the decline it was experiencing at the time. The theatre would close and cease operations in late 1967 noting “lack of community support and increase in accessibility to television” as the nails in the coffin.

Going back to the early 2000s the outcry and attempts to get the building renovated were made by the city and its citizens. In 2003 the City of Pawnee tried to put together a plan to restore the front facade and build a new theatre behind it. The funding for the project was to be borrowed from the Industrial Authority which would then be paid off through lease payments from a private operator. Architect Calvin Welker was looking into ways the building could be renovated and submit his report back to Pawnee. Unfortunately, the idea didn’t come to fruition and a decade later on November 1, 2013, the Buffalo Theatre went up for auction. A prominent figure in Pawnee Dr. Clarance Benes was the lucky bidder for the historic theatre. “I didn’t really intend to buy it but instead I “low balled” the opening bid to get it started. I wanted to see what fool would buy it. Well, when I made that bid, the mayor and other people there put there bidding cards in their pocket! It was sold to me after no one else bid, I found out later they wanted me to have it because they said I was the right person.” Over the next three years Dr. Benes with the help of friends and the community. A new roof was put on, the foundation stabilized and the flooring replaced. On October 8th, 2016 the newly renovated Buffalo Theatre had its first indoor grand opening with the performance of “The Foreigner by Larry Shue”.

Almost exactly three years later the Buffalo Theatre made its return grand opening with live performances and dances. On August 10th, 2021 The Buffalo Theatre had begun another era under new ownership. Randi Thompson of Red Windmill Productions LLC became the new proprietor of The Buffalo Theatre with the dream of being the center of arts and entertainment for our region. Since taking it over she has gone to extensive lengths to breathe new life into the building and make her dream a reality. In the short period of time since opening they have held numerous events such as trivia night, open mic weekend, Mike Music and Friends, a handful of movies and much more. If you are ever in the Pawnee area we highly suggest you check out this historic theatre and support the local business!

Gallery Below of Buffalo Theatre