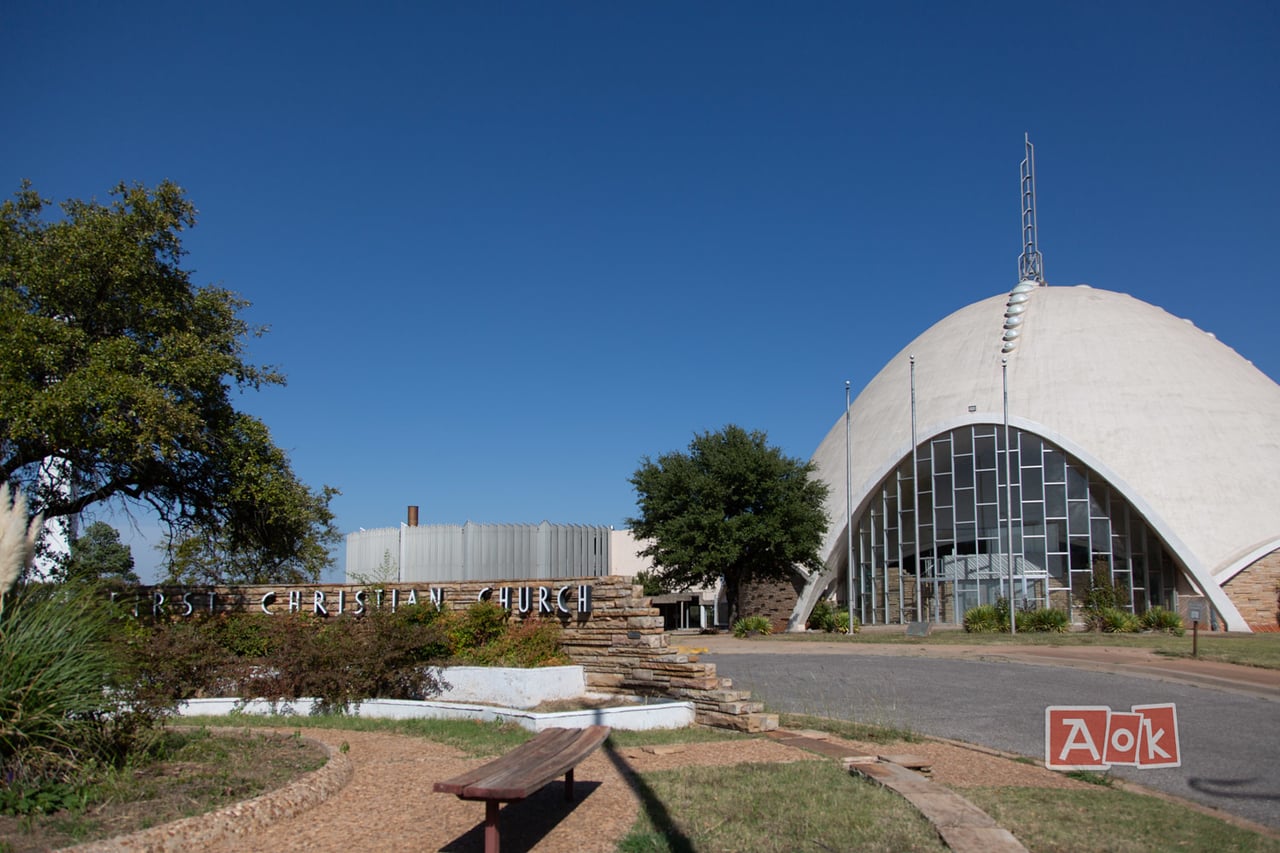 What is it that makes architecture worth saving? Some might argue the pretty looks. But let me present you with a bigger picture. Our architecture is a physical dialogue of our history, a time capsule of memories and events. A timeline of how building has changed over thousands of years amongst different regions and peoples. The difference in structures is what makes a city have character and charm, First Christian Church of Oklahoma City also known as the Egg Church.

In today’s society, many big cities are experiencing a similar situation to what’s happening to Oklahoma City. Blocks, where you could once see Gothic, Spanish Revival, Colonial, and other different styles of architecture, have been torn down and replaced with mostly modernism paired with black, white, and grey shades of paint. This is why there has been a surge in the fight to preserve historic structures across America in the last decade, especially those of otherworldly design.

History of the Church of Tomorrow

Forty acres was purchased by the First Christian Church in 1946 and almost immediately work ensued on a complex of structures. The first to be dedicated was just a year later a 3000 seat outdoor amphitheater dubbed The Jewel Box Theatre. Today it is the oldest still active outdoor amphitheater in the entire state.

Over the next ten years the main sanctuary, educational building, and music & fine arts buildings would be constructed on the acreage as well. The Main Sanctuary, dubbed the egg church, took the architects three separate tries over several years to come up with the end design. Rev. William (Ben) Alexander wanted something extraordinary, a “Church of Tomorrow!” Working with architects R. Duane Conner and Fred Pojenzny they were able to do just that for Alexander with a $2.1 million budget. The first design of the church took on an International Style of architecture but as time went on over the next six years the design changed drastically.

The second design was revealed in a 1953 pamphlet and took on a prismatic shape. Rev. Alexander and the parishioners all quickly accepted the design and pushed fundraising hard so that construction could begin immediately. It wasn’t long before they realized the construction of this second design would be far too expensive. Their budget had shrunk by almost a million dollars and it was back to the drawing board.

The third design for the First Christian Church of OKC was the one that we all know and love. Taking on a large dome shape with a point at the top, anyone in the immediate area wouldn’t be able to pass by without marveling at the structure. Conner had the idea of constructing a building with a thin-shell roof design and saw the First Christian Church as the perfect opportunity to execute his idea. Construction on the sanctuary started in 1956 with the sanctuary being built of steel and reinforced concrete and stone. With enough seating for 2000, the large room was lit with 27 skylights. The pulpit was 40 ft deep with offices and some classrooms on the ground floor.

The educational building connected to the dome is a circular structure with unique parallel panels of stainless steel on the outside. It was noted as being constructed this way to shield from direct sunlight hitting the building. Just a stone’s throw away sits a small music and fine arts building that contains a theater-in-the-round, rehearsal room, and moveable risers for ballet workshops. Equipped with all the best stage, sound and lighting equipment to give up to 240 patrons the best experience. The complex was dedicated on December 23, 1956, to kickoff a week-long celebration of events.

Membership of the church held steady at around 3,600 around the turn of the decade. Many years later after the former Rev. William Alexander would pass another Alexander would take over the pulpit. His son Rev. Don H. Alexander was named senior pastor in 1972 to carry on the legacy of his father. In October of 1995, families gathered at the First Christian Church after the Murrah Bombing. They set up a triage for first responders to reconvene and recharge as well.

The conversation about the possible decline of the church was first sparked around 2016 when the congregation put the building up for sale for $8.2 million. The uniqueness of its design was enough to garner interest but it also was enough to end most potential prospects. The huge dome made the functionality of the building as anything else very limited without destroying any historic features. Just a year after putting it on the market with not many prospects the asking price for the 31.8 acres and buildings was reduced to $5.65 million.

In 2019 after a congregation meeting it was announced that due to the church’s cost of upkeep and utilities they could no longer afford to hold services in the building. Preservationists all over the city began to rally and raise awareness on the impact abandoning the structure without a buyer could have. Then it came out that a buyer had been found for the property, but this was less than great news. The deal was contingent on the buyer being able to demolish all buildings on the property including the OKC landmark. Worried that demolition was imminent citizens banded together naming their movement “Save the Egg“. A facebook page was made for updates, letters from the American Institute of Architecture were sent to board members, city council meetings were attended, news stories were done, and protests in front of the building were held to show how passionate the citizens were about saving the building.

The building already being listed on the National Register of Historic Places on March 14, 2011 giving any buyer the opportunity to utilize historic tax credits to restore the building. Oftentimes this status is confused as a full protection against demolition but it is not. The NRHP status given to buildings only adds a further level of consideration when owners are looking to demolish it.

This sprung organizations like Okie Mod Squad to spring into action on getting the church designated as a Historic Landmark. Going to the Historic Preservation Commission (HPC) with their proposal in April 2019 and hundreds of petition signatures their efforts worked, somewhat. The HPC directed city staff to compile a report of the First Christian Church’s eligibility for designation as a Historic Landmark, a move that would preserve the buildings and limit owners’ options for renovations. The vote would block the demolition of the buildings for up to 180 days giving preservationists a bit more time to come up with a solution.

FCC was less than amused with the pushback they were facing. The move would end the discussions between the potential buyer and the FCC congregation. Attorney for the church, David Box, wrote a letter addressed to the Mayor and City Council Members stating that the HPC’s April 3 vote “constitutes an arbitrary, unreasonable and improper abuse” of the commission’s authority. He asked that the Oklahoma City Council withdraw or reject the decision made by the Historic Preservation Commission in an attempt to stop them from looking into designating it as a Historic Landmark.

It’s not common that we agree in these situations but going back to what was stated earlier, the unique design of the building already makes rehabilitation difficult. Adding it as a Historic Landmark would only pose further complications and restrictions to rehabilitation. As of July 2022 the motion to make the building a Historic Landmark has not passed and the church is in danger again of demolition if a buyer is not found.

Holding their last service in the iconic egg-shaped building on April 5th, 2020 they then moved all services and activities to another building on the property that formerly held the preschool services. They made the move despite not having a buyer to take over the building leaving it abandoned entirely. For the last two years, it has sat vacant as it slowly deteriorates still for sale and waiting to be rehabbed. Starting in July 2022 activity started on the property drawing concert again from the community. But after speaking with FCC representatives they have taken on the task of asbestos abatement in an attempt to make the building even more enticing to developers.

Demolition of the Egg Church

It is with great disgust we report today September 26,2022 the sudden and sickening demolition of the First Christian Church (Egg Church) in OKC. Not three months ago we made a post about the asbestos abatement that was going on inside, we were assured by the real estate attorney that this was only to help entice the sale of the building, which now we can assume was a lie. This was done under the full knowledge that there were SEVERAL buyers/offers on the building from developers looking to restore the building, they still decided to tear down this historic landmark. Just last night the Oklahoma Opry called us and told us they put in an offer on the building and were told they needed to show proof of funds to ensure they were capable of making the purchase and the restoration happen. Those proof of funds were sent last week with no response. This morning a demolition permit was approved and within an hour this history was gone.

Gallery Below of First Christian Church of Oklahoma City

Historic Oklahoma City “Egg Church” is in danger of being demolished

The first six sentences say it all.

It’s a shame we are quick to destroy our architecture rather than do whatever it takes to preserve it for future generations to appreciate and enjoy.

Just tear it down and replace it with something with no personality or character at all as most of todays buildings are designed. Boring and dull.

Yes John, we are covering the story now and the post should be updated soon if not already. We are just absolutely sick

If you drive by it (31 July 2022), it appears to be having something happening to it