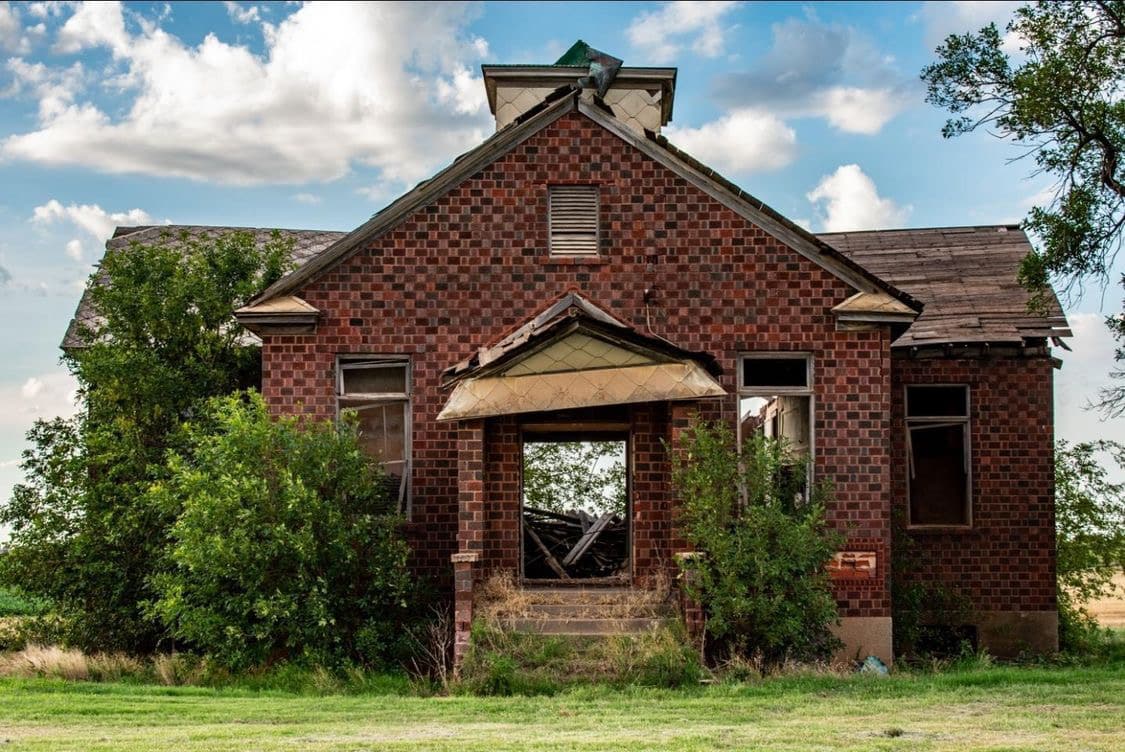 In June 1917 a new church was built on this site, with the frame building having 30×40 dimensions and renamed from Valley Center Baptist to the Eden Baptist Church. The congregation over the next ten years continued to grow and it was decided that a modern brick building was to be erected on the property. The frame building that formerly held the services was converted into a parsonage. Around this time the church went through a revival put together by Rev. V.E. Patterson, which resulted in forty new members.

The new Eden Baptist Church was constructed with the help of its members with the men of the congregation excavating the basement while the women provided a supper. Francis Mitchell donated the land and $100 towards the project and with John Hughes, while not members of the church offered their services and constructed the foundation. Mr. Lockhart of Drummond Oklahoma was hired for the carpenter work. After a long year of work by over thirty men in the community Eden Baptist Church was dedicated on Sept. 16, 1928, and quickly earned the title of ‘The City Church in the Country ‘. The dedicatory sermon was lead by Dr. L. R. Scarborough, the President of the Southwestern Baptist Seminary. While hard to imagine now in its fallen state, the church had an auditorium, pulpit stand, piano, cookroom, furnace room, pastor study room, and an upstairs. One of the most unique features of the building was the steeple atop the building featuring an angel watching over the church, this was unfortunately stolen in the 1990s.

Less than a year later the church’s North gable was badly damaged by heavy wind and was covered by insurance thankfully. The little country church presented a light that set it apart from its counterparts. Upon attending a service you would be embraced with a warm welcome, spiritual fellowship and sincere pleasure to have you there. The Eden Baptist Church, like many other small churches located in the rural countryside, closed its doors on September 30, 1973. Much of the congregation had passed and people were leaving the country for the city life and the church could no longer stay open. The Eden Baptist Church was given to the Hennessey First Baptist Church a few years later. One interesting aspect and surprise the church left behind was the time capsule enclosed in the cornerstone, which was then removed from the building by the FBC in Hennessey. It is said that the time capsule contained the church’s records and beginning history. Over the last few decades, the building has experienced significant storm damage, the steeple has completely come down and the north wall looks like an explosion hit the building. The following video depicts the Eden Baptist Church approximately around the 1940s with families leaving service. This video was brought to light by Leroy Crawford who said the video had been passed down by several hands prior. He has identified a few people but has frozen/slowed down the video in some spots to hopefully identify others.

Gallery Below of Eden Baptist Church