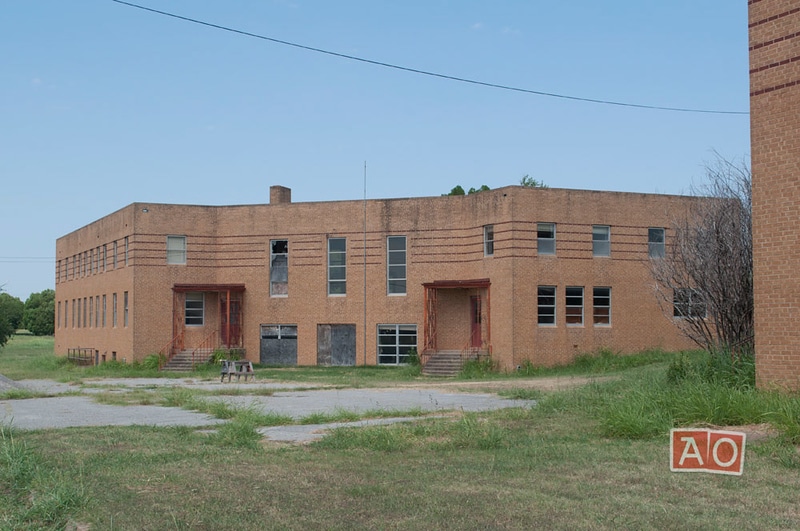 Fort Sill Indian School has witnessed many changes during its more than 100 years in Lawton, Oklahoma. When established in 1871 it served Indian children as a reservation elementary school. It gradually became a boarding high school with an enrollment drawn from all over the nation.

On July 1, 1869, Lawrie Tatum, a Quaker, was placed in charge of the Agency of the Comanche, Kiowa and Kiowa-Apache tribes and one of the first assignments carried out by Tatum was the construction of a school. The school was first established in 1871 about a mile north of its present location and operated there until 1899-1900.

The first stone school building was one and one-half stories high. It contained two classrooms, a kitchen, dining room, and dormitories. Josiah and Elizabeth Butler of Ohio had been appointed to take charge of the school. The Butlers opened the first day of school to seven pupils. At the close of the first school year, Reverend Butler had enrolled thirty-three students.

Buildings: There are twelve buildings belonging to the plant. All of which are in fairly good repair.

Health and Attendance: The health of the pupils was better than average. The attending physician is a very conscientious and competent man who is faithful and untiring in his efforts to restore the sick and protect the health of both pupils and employees.

In 1908, the position of Superintendent was abolished and the school head was designated as “Principal”. J. A. Buntin was the first principal of Fort Sill Indian School. In May, 1955, the position of Superintendent was reestablished with James Wallace being promoted to that position. In the early years of the school, strict militaristic-type discipline was a part of the Fort Sill program. It was not uncommon to observe students participating in precision marching as they were moved from one part of the campus to the other. Former students state that corporal punishment was often administered harshly for infraction of rules.

Shortly after World War I, Fort Sill Indian School was under the leadership of Mr. Edward Shield. The predominate concern’ was teaching the Indian students English, the three R’s, and good personal hygiene. The enrollment was 200 with approximately 12 tribes represented.

The first new building to be added after a long period of time was the shop building which was constructed in 1933. In 1935, the gymnasium was built. The present building which houses the academic classrooms was built in 1933. the first senior class graduated in 1939.

During the decade, 1940-1950, the Fort Sill Indian School emphasized vocational training and home-making at the high school level. Two hundred thirty students, representing the Comanche, Kiowa, Apache, Caddo, and Wichita tribes, were enrolled in the first to the twelfth grades inclusive. Many of the students remained at the school throughout the year in order to care for student projects such as field crops, row crops, gardens, dairy, and beef cattle, swine, and poultry. In the elementary grades, the children had gardens, farm animals, and other projects in which they learned about rural life. In the intermediate grades, cooperative projects had been the means of making money for the pupils as well as training them.

Until the middle 1940’s, the Fort Sill Indian School enrollment had been limited to the following Oklahoma tribes: Kiowa, Comanche, Delaware, Apache, Wichita, and Kiowa-Apache. A combination change in the Bureau of Indian Affairs policy took place at the close of World War II when the school’s enrollment was reduced drastically. Oklahoma students were encouraged to attend the local public schools. Navajo students from New Mexico and Arizona were admitted. This change was justified because of the lack of adequate educational facilities for hundreds of Navajo students who were ready for Junior High and High School. The enrollment at one time was 80% Navajo. In 1960, the agriculture program was dropped from the curriculum of the school in favor of a more academically oriented program. That same year, first through sixth grades were dropped from the program as well. In 1963, grades seven and eight were dropped thus making Fort Sill Indian School strictly a high school.

Later the Seminoles from Florida, Alabama-Coushattas from Texas, Chippewas from Minnesota and a great influx of various tribes from the Northwest arrived to add to a multi-tribe enrollment. In 1970, more of the local tribes were admitted to the school enrollment. Over three hundred students were enrolled. Of that number, nearly 200 were from Oklahoma.

I have lots of memories of the ole Fort. I was only there for 2 years. My Junior & Senior year. Made lots of friends from all over the states.(68-70). I'm from Shawnee,OK. I seen that Benita W. made a comment earlier. Was glad to see her name. It's sad to see the ole place like it is now,but I do have memories. I hope that there are still many friends out there, that is still going. Fixico (Larney) is still going.

My dad coached basketball there , his name is Dale Osborn.

He was my coach. He was a good coached. My junior year.

My home away from home, my brothers and sisters from another place 🙂

I just read your comments. I went there for a few years back in the early 70s. I had a lot of good memories while there but also some loneliness too being so far from home with no family close by. Weekends and Holidays were the hardest everyone one would go home and the place was so quiet. Sometimes on weekends or holidays a family would check me out and take me to their homes. I always appreciated those times and their kindness. I always remember coach Reed taking me home for Thanksgiving and meeting his family. They were so… Read more »

Sam and Amanda Moats taught at the Golebo School in the late 1800's. Is there any record of the school at that time. I have a small photo of them in that location.

She was my great aunt. I would appreciate any information the Historical Association could provide!
joanewitt23@gmail.com. Thank you!

I attended in my junior year for a few months of the school year, the year before it closed. I met a lot of great kids there. Too bad they closed it.

I attended Fort Sill 1968 thru 1970. I graduated in 1970. I made many friends there. I'm from Oklahoma and it
was the best time of my life in High School years. My friend had already been there before I started school there. We were from the same town. I'm glad that she suggested that I attend Fort Sill. I made so many friends from so many states. Different tribes. It was sad to see the school close. Wasted buildings.

gosh I went to school there *74-75 and I loved the place,,,lots of wonderful memories and met a lot of awesome people and made friends with wonderful beautiful people, I will always cherish the time I spent at F.S.I.S.

Fort Sill Indian School was my home away from home for 4 school years. I graduated in 1966. Being at the ole Fort were the best days of my life, I made some close friendships there, and I still keep in touch with them, they are family to me. My wish is that the Fort would re-open someday.

Excellent photo set. My compliments to the photographer. That stack of award certificates that were inexplicably never handed out was quite haunting. They're dated 1996, so I'd say that was the last year the school was in use. Would that be accurate?

No, there were other education programs in the Lawton area that utilized some of the building after the closing of the school. KCALUC was also there and operated the KCA lands.

My name is Joseph Cortez I lived therein the80s my grandma was part of the rehab me ad my cousin we lived in front of the tenniscourts I. Was 6or7 well one day I was looking for my cat so I looked out the window in the firstdorm that faces are house it was the second floor like the fourth window I saw a girl looking at me it was clear as day she had gray clothes on and wild hair she looked write at me I remember my eyes got wet like I was crying i new that ever… Read more »

My mom attended high school and graduated from Ft. Sill Indian School during the early 1950's. She spoke of it fondly, especially of the friendships she made while she was there. She was Navajo from Arizona and a long way from home. I still have a newspaper article & picture of her as a Homecoming Queen nominee!

What was your mother's name then? My dad went to school there too, he graduated in the early 1950's too. His name is Walter J Conroy, he works at Haskell now (still, at 79 years young!)

myDad also went there in the 1950's and his name was William Henry White and went by Bill.

hello… reading the replies … my father went to school there in the 50’s as well (he’s now 83 turning 84). This is an awesome finding … ~arizona

went there in the mid seventies,lot's of good memories, had a good time meeting different people, stayed there for the christmas break, had a friend from Elgin that i stayed with, hope to go back some day

My Grandmother & her siblings went here in the early 1900's. She used to tell us about it when we would visit the Indian hospital in Lawton.

If there are any of the ole bops out there please comment, I MISS you all and all the good times we had at the Fort.

I LOVED THIS SCHOOL. I WENT THERE IN 1965 TO 1968 . WHEN I GRATUATED. MET SOME REALLY GOOD TEACHERS. AND STAFF. I PLAYED FOOTBALL AND LOVED IT ALOT. WISHED IT WERE STILL OPEN. WE STILL NEED FACILITIES LIKE THIS FOR OUR YOUTH.