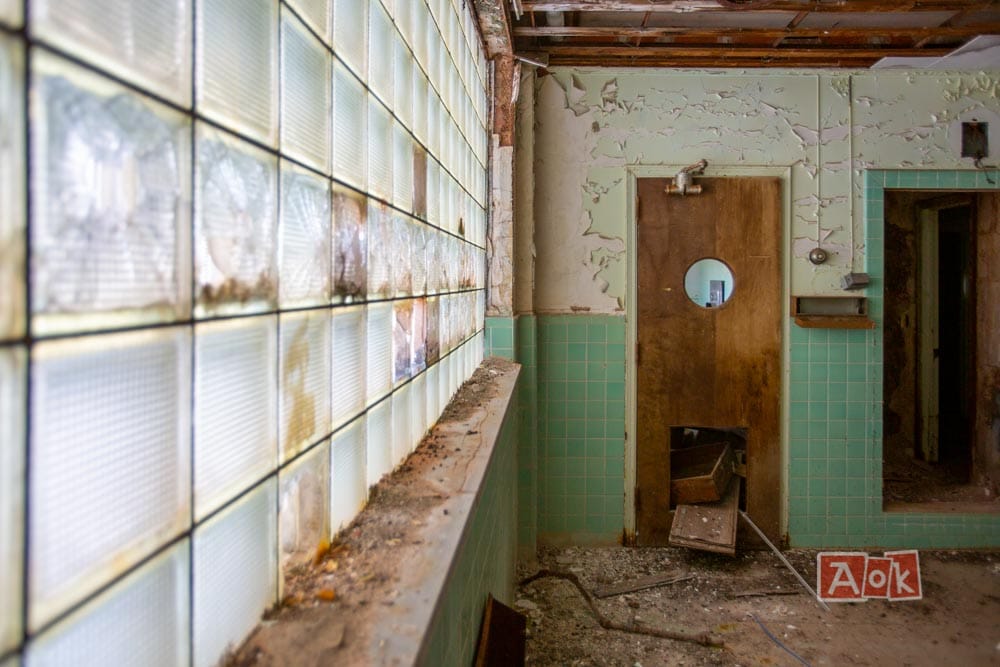 Written by Emily Cowan
Share this Location
FacebookTwitterRedditPinterestEmail
It always a fascinating image to see an abandoned hospital. Molding surgery rooms, rotting medical equipment, empty hallways. However, for many years the Logan County Memorial Hospital in Guthrie sat barricaded on the edge of town leaving many questioning what still remained. I can’t count the amount of times I saw someone post pictures of the outside and it quickly became a mission to myself along with the Abandoned Atlas team to see the inside.

It was in 1925 when The Methodist Episcopal Conference began construction on the brand new hospital in Guthrie Oklahoma, however due to the depression plans to complete the facility were halted. It wasn’t until 1932 when a nonprofit organization in Guthrie purchased the unfinished medical structure and named it Cimarron Valley Wesley Hospital.

In 1946, the Order of the Sisters of Benedict purchased the hospital and completed construction soon afterward. St. Anthony Hospital, owned and operated by the Sisters of St. Francis of Maryville, Mo., bought the facility with help from the community in 1964, renaming it Alvero Heights Hospital. The name was changed to Logan County Memorial Hospital in 1974.

The hospital was deeded to the county in 1977 and a replacement facility opened west of Guthrie in October, 1978. 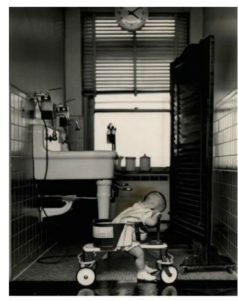 In 1982, R&T Properties, a partnership of local businessmen Ray H. Riddle and Hal A. Treadwell, purchased the former Logan County Memorial Hospital and its four acres for an undisclosed price from the Logan County Hospital Trust Authority. The five-story, 55,000-square-foot building, located at 19th and W Warner in Guthrie, was supposed to be remodeled into 50 to 70 one-bedroom and two-bedroom apartments but the project never got off the ground.

Starting all the way back to 2009, we tried reaching out to neighbors and city officials to find the owners to let us in, no luck. Security was obviously a priority though because I was constantly hearing about arrests being made of people trying to break in, thank goodness! It wasn’t until December 2016 when James Kirkendall, an Abandoned Arkansas team member, finally was able to track down the persons in charge. They told Kirkendall that Belmont Management recently purchased the decaying building and had plans of repurposing it into senior housing.

This was great news, it’s also good to hear when our states historic places can be saved. Right before construction began, in March of 2017, Kirkendall was able to able to get us an exclusive tour of the inside.

The interior was gorgeous; square glass walls, the doors from the 1940s, the metal light fixtures, the original ceiling.  It was all still there. During the tour, we met the former owner’s head of security that told us of their high-end set up. There were pressure triggers on the front lawn and the back that would instantly notify police, hidden cameras on all sides of the building. He told us a few time he heard conversations of people who planned to break a window; they were arrested shortly after. As we continued, we found an old birthing table in the middle of the hallway, signage and on the second floor the nurses station’s buzzer system still had electricity and was in working condition. (Photos below). 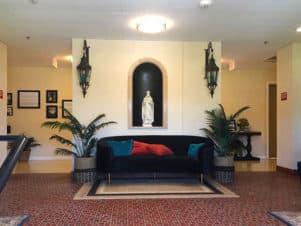 Now, in 2020, the hospital has been fully redeveloped and reopened as the The Villas of Benedictine Pointe Apartments. “And we’ve tried to keep it as historically correct as possible,” said Property Manager Jim Martin. They offer studio, one and two-bedroom apartments. A happy ending for the vacant hospital.

Read more about the renovation: https://hamiltonpropertiescorporation.com/blog/villas-of-benedictine-pointe

It’s so funny to hear the stories about the hospital’s final years as an abandoned building – especially things like pressure plates in the lawn. There were none. But, that said, I was one of the pressure plates, myself. The cameras inside weren’t hidden, they were very easy to see, if you got inside. Less visible was the omnidirectional mic that picked up every sound in the building. It was on the pipes in the ceiling of the basement hallway, just outside what used to be the kitchen. For over a decade, I was part of the paranormal investigation team… Read more »

Uileag, it’s good to hear from you again! -Russell

My mom grew up in Guthrie, she had 11 siblings, her family arrived right after the city was established, and one of her sister’s live in one of the new apartments now. I co-founded a paranormal team, when we research a place in Guthrie I am not sure what interests me the most “The possible ghostly activity, or the the old buildings/houses”. It’s a hospital when first opened death was higher, than those who survived. Almost EVERY deadly disease back then, we have vaccines for today. Operations was based on “Let’s see if this works, instead of knowing the procedure… Read more »

I was born there and my mom worked there over 20 years. Not haunted

Guthrie Oklahoma is my home town. Still live here today. A lot has changed here but that hospital remains the same in its empty, silent but yet creepy and amazingly beautiful walls iv been in wonder since I was little of all the things that had-has happened there. My moms dad my grandfather died there on the fourth floor to the right of the building I never got to meet him but I know from all the stories I hear of him I would have loved to hear him play that ole banjo 🙂 lol RIP graps

My dad was born here….when I was about 14 I saw someone standing in a window on about the second/third floor….he peaked around the corner of the window and waved at me and then turned where I couldn’t see him….i ran all the way back to my church 5 blocks away screaming…..still gives me chills

I went to the hospital once when I was a kid before they were even really strict about ppl sneaking in. .. when we went in it was really cold and I remember it was like super hot outside so I kinda thought that was weird then I felt acoupke strong breezes pass by me acouple of times and ended up taking an old hospital book …I recently just went back w a friend and before we could even walk around the building once there was an officer that had pulled up he ended up being pretty cool about it… Read more »

I lived down the street from the old hospital for 12 years. I was born at the new Logan County Hospital in 1981 and growing up down the street, being a candy-stripper at the nursing home.. My brother and I even went inside.. I know its haunted. There was a tub/giant sink full of blood. The morgue even smelled like dead. Plus, my aunt was the person that contributed to the hospital shutting down because she sue them for all they had the incubator up too high permanently scarred my cousin's face.

Are the cams still up and going? Would some one please leak the link? I loved watching these cams. Got to see somw interesting things. Aome good sound bytes as well.

In 1950 my mother's parents were traveling to visit my family in moore or norman when my grandfather suffered a heart event near guthrie and was taken to this hosp.He was hospitalized for some weeks and my grandmother slept in his room on a cot. One morning she was found to be dead. She was only 56. Weird! He recovered. I was 4. I have never seen the hosp but feel I should and plan to some day.

I was born there on Aug 17, 1967. According to my birth certificate, it was called Alverno Heights Hospital at the time.

I was there in 1951 during the Polio epidemic. The sisters provided excellent care.

Jim, I spent a month there in 1949 with Polio and was then transfered to Crippled Childrens Hospital in Oklahoma City, where I spent another month before going home.

our neighbors also tend to call the cops alot

AVOID THIS PLACE! Not for any "paranormal activity" or ghosts, but for cops!

I noticed the building as I drove through Guthrie recently — in broad daylight. As I walked around the exterior of the building, a guy drove up and said he'd called the cops on me for trespassing. They showed up, and let me go shortly after. The cops said the owners have monitored 24-hour surveillance, and regularly call the police. Not sure what's up with that. 🙁

Sounds exactly like my experience yesterday. Was driving into town from the west side on 33 and noticed the building. I've been all over that town, but just noticed that building for the first time yesterday. So, we decided that we'd see what it was. We got out, walked around, snapped a few pictures, then the cops showed up.

A paranormal research team has/had 4 live video feeds inside. Ya go in, they see ya and make a phone call, you'll be escorted out. I walked through long before then,though. A few personal experiences by all of us there.

Hey I live in Stillwater and my wife and I are paranormal investigators and we were wondering who we need to get in touch with for permission to enter this location.

5 Things to Do in Guthrie, Oklahoma | Found in Flyover Country

[…] in 1925, the five story hospital on the corner of 20th and Warner in Guthrie is now boarded up. But AbandonedOK reports that lights inside the hospital have been seen flickering on and […]

It IS NOT haunted. Ive been there to know. Dont go on the property. Its illegal youll go to jail and just a little p.s the people living around there are not okcprg thats normal people however cameras are watched at all times. So its wise to just stay away