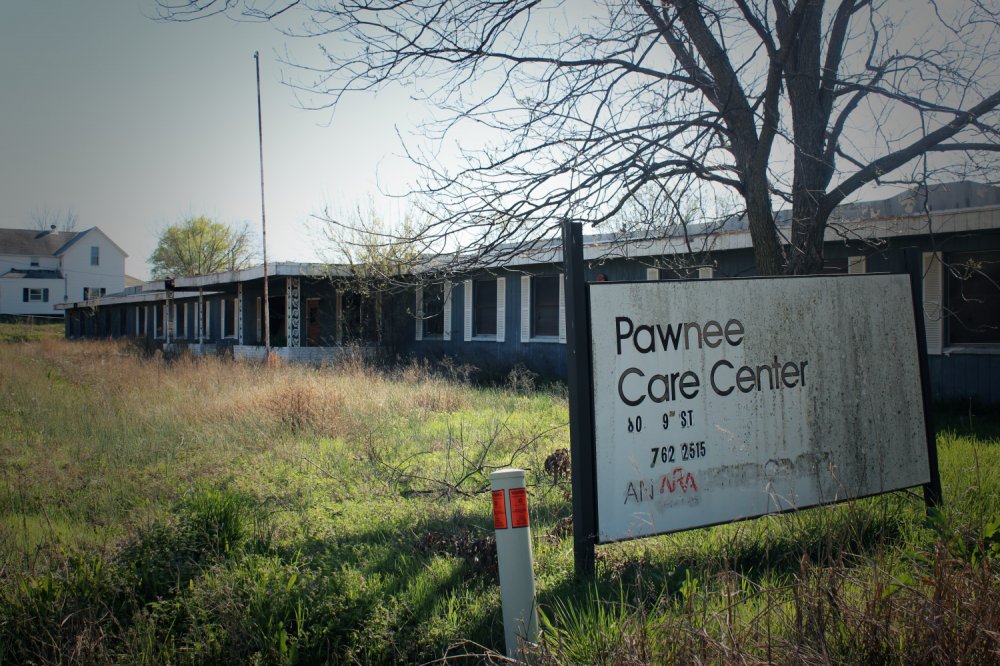 This single-story building was built in 1968, was last used in 1996, and contains approximately 11,383 square feet of space. The building is situated on approximately 5.1 Acres. The former nursing home includes 29 resident rooms and 4 baths. Resident rooms are 10-feet by 17-feet in size.  Pawnee Care Center was a nursing home located in a small neighborhood. It was referred to as “A lost cause.” Many patients or relatives of patients were displeased with the hospitality starting about the late 80’s or 90’s.  Many people started to use other nearby nursing homes. Finally when Pawnee Care Center only had three residents left, they had no choice but to close the facility.  Now the Care Center sits in the ground at a slant slowly decaying.

PAWNEE — The assistant chief of police shot and killed a burglary suspect after the suspect stabbed him in the face Saturday night, authorities said. According to Pawnee Police Chief Herb Adson, the suspect attacked officers inside the building, stabbing assistant chief Calvin Brown in the face. Adson said Brown then shot and killed the suspect, identified as 25-year-old J.D. Gonzalez.  Brown’s injuries were apparently not life threatening, but he was taken to a Stillwater hospital Saturday evening and released Sunday morning, officials said.  Brown and a tribal officer responded to the report of a burglary about 8 p.m. Saturday. Gonzalez reportedly ran and barricaded himself into an abandoned nursing home in the 800 block of Ninth Street, said Jessica Brown, spokeswoman with the Oklahoma State Bureau of Investigation. The OSBI in conducting an investigation into the shooting and will turn its findings over to the Pawnee County district attorney, Jessica Brown said. Adson said Calvin Brown, a 15-year veteran of the Pawnee police force, is on routine paid leave while the incident is investigated.

Read more from this Tulsa World Article
Gallery Below

Let's not forget that Brown opened fire on that boy after running into the Pawnee Care Center with no back up, after being barely grazed by the knife. Let's also not forget that all of this took place while small children were playing in their yard mere yards away (4 of them were mine). J-Dubb's mother stood crying in my yard hours later, while people came by to gawk at the place where a boy who stole a couple of x-boxes got shot. The place was already haunted by a female patient, who stood in her soiled night gown swinging… Read more »

I have lived in Pawnee, Ok for 10+ years. Me and my siblings went in there a couple of times and it freaked us out. From then on, just walking past the place scared us.

Jd was my best friend who was in the wrong place wrong time lovem an missem dearly .had the same thing happen to my friend nate Samuel in broken arrow its still not clear wat happen but no two good friends are gone love yall see u on the otherside

just like nobody wants to know that that coward brown wasn't even stabbed you jerk! wait till something awful happens to one of your family- you jackass! im sure it's coming soon.

i live in a small town of stratford oklahoma, theres alot of abandoned homes, churches, and also theres a nursing home here that has been abandoned since i believe 2005 or around that date. im 15 years old and me and acouple of friends walked over there one night and was going to go in there, but we ended up getting scard because there seemed to be the sounds of people moaning or quietly shouting "get out" we havent been there since that night… maybe you guys can check it out and tell me what yall found?

Hi, just wondering, did you ever figure out anything about that place? I’m interested in looking at places like this and I was curious to see if it is still around.

Nobody wants to know about the boy that was shot in that place while running from police… he was shot by our police chief brown… guess he should have stopped running after he broke into that house and stabbed a cop!!

Wouldn't you hate to be one of the last patients here? That must have been depressing.

I grew up there so I think this is cool that someone finally posted some stuff from pawnee and skedee valley. My great great aunts house there on hwy 18 is one that is haunted as well, though will have to have family permission to take pics, can't go inside because it is too dangerous floors are giving way.

Hi, i think that i noticed you visited my websitye thus i got here to go badk the desire?.I

am attempting too in finding issues to improve my site!I assume its ok to make usse of a

few of your concepts!!

Why don't you make use of some education and learn to read and write.