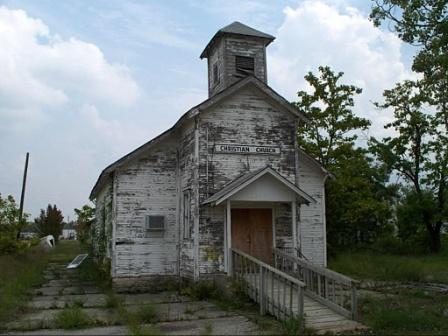 Located eight miles north of Miami on U.S. Highway 69 in Ottawa County, Picher is Oklahoma’s most northeastern incorporated city. Its city limits adjoin the Kansas state line. In late 1913 the town developed around the lead and zinc ore strike on Harry Crawfish’s allotment. Picher’s name honored O. S. Picher, owner of the Picher Lead Company. Statewide newspapers reported that the town was born overnight. Picher incorporated in March 1918. It had a population of 9,726 in 1920, which peaked at 14,252 in 1926, at the height of mining. As mining activity decreased, the population dropped steadily to 5,848 in 1940 and to 2,553 in 1960.

Picher was the most productive mining field in the Tri-State Lead and Zinc District (Oklahoma, Kansas, and Missouri) and produced more than $20 billion in ore from 1917 to 1947. Over 50 percent of the lead and zinc metal consumed in World War I came from the Picher Field. During the mining boom years more than fourteen thousand men worked in its mines, and another four thousand worked in approximately fifteen hundred mining service businesses. Many of these workers commuted to work using an extensive trolley car system that ran all the way to Carthage, Missouri. In the subsequent years Picher could not attract new industry, because a majority of the real estate belonged to restricted Quapaw heirs and because the town had many mines distributed underneath the surface.

O. S. Picher provided the city’s first deep water well, thereby providing the beginning of a municipal water system. The leasing system employed for mining dictated that an ore reduction mill be built on each forty-acre tract. In 1927 there were 248 mills operating in the Picher Field, and this continued until the late 1930s when centralized milling resulted in mill consolidation. When lead and zinc mining finally ceased in 1967, pumping water from the mines ceased and they began to fill with water, accumulating 76,800 acre-feet of mine water under ground. This contaminated water began to seep from the mines in 1973. In 1983 the Picher area became part of the U.S. Environmental Protection Agency’s Superfund Site program. With 1,400 mine shafts in the Picher area, 70 million tons of waste tailings, and 36 million tons of mill sand and sludge, environmental clean up was a monumental task.

In 2008, The EPA finished the clean up of the Superfund site. This was done by a mixture of buyouts, chat sales, on-site disposals, rural residential yard contamination cleanup, soil cleansing, and rural residential well sanitization. Overall totaling over one hundred and sixty million dollars before it was completed. Those who were willing to be bought out did so. Those who stayed behind were supplied with alternative ways to utilizing the wells that were contaminated. Additionally, chat that had once been piled on top of the soil was put back into the mines to support the land and reduce human exposure to lead dust.

After all of the work that was completed to make the town livable again, an F4 tornado cae through the town of Picher on May 10, 2008. The tornado tragically took the lives of six people and injured at least one-hundred and fifty others.

In May of 2009 The Picher-Cardin school systems hosted its final graduating class & on July 1st the 90 year old district closed its doors forever. Today, all that can be seen in the town is overgrown house foundations, and a few remaining buildings, which are now crudely spray painted as government property.

Fredas Cook, a long time resident, has put together a great database of history and pictures. For a lot of great information about Picher and Cardin, visit his site Here.

Hoppy's son Steve was the first guy I ever met with the courage to come out of the closet when I lived in Picher. Back in the late 70's that was pretty much something you kept to yourself while living in a small town. He really inspired me to not be afraid of who or what I was. I guess if I have one thing in my life to be thankful for it was him.

When was the tornado? My great grandmother, Ellen Teague was blown away in a tornado in 1942.

My birth name is Elizabeth Grace Garner, and I was born in Picher Dec 28, 1943. My brother, Charles Theodore Garner was also born in Picher, May 8, 1942. When our mom left, she took the train to Herlong, Ca, and changed our names so as not to be found by our biological father. The man who raised us was Wayne Allen Pratt. Nov 3, 1948 our youngest brother was born. His name was Wayne Joseph Pratt. When we started school, my brother and I went by Chuck and Patty Pratt. When Chuck was 18, he joined the NAVY. When… Read more »

My family and I lived in pitcher for a few years when my husband worked for the EPA cleaning up the area. I am from the northeast and I never met such nice welcoming people then the people I met in Pitcher. We lived in many areas in the US and I will never forget this wonderful town and it's people. Such a shame but it won't be forgotten

With Your Coffee | Preservation in Pink

With Your Coffee | Preservation in Pink

just wanting to find out if the properties in picher are for sale?

grew up in century, also known as douthat.. mom had a grocery store their for a few years. moved to picher in my 7th year of school. graduated in 1948. champion football year for picher high. i hope the spell check warning stays on this note. married the best gal in the area (cardin) and she still puts up with me, after , GREAT SCOTT!!!!! HAS IT BEEN 62 YEARS!!! HAVE 5 GRANDS AND 4 GREAT GRANDS. GUESS WHO
j.e.a. john edgar anderson BUD

My great grandfather lived in Douthat and G. grandmaw was blown away in a storm in 1942. My family were the Teague and ran a hotel for miners. Have you heard of the Teague family? Marian Parrish Watson in Texas

I always will remember the good times I had growing up there. My friend Sadie Sexton and I were always together. We shared everything from cloths to boys just like sisters. I miss you Sadie as I will always miss Picher

Looks like it's been almost a year since anyone posted on here. Just heard about the town on a tornado video and looked it up. Such a shame to see so much history gone in a flash. I'm from Biloxi, MS (St. Martin) and it still breaks my heart every time I go back to see the school where I attended and where my parents attended is no longer there. It was destroyed by hurricane Katrina along with a huge portion of the coast. I large part of my history disappeared in a matter of hours so I can understand… Read more »

Skyler, where did you move to? Sorry you had to leave.

It actually looks like it was a nice little town. (Nicer than the one I grew up in around Western OK). The PBS documentary was really good. Shocking how those huge lead piles surrounded the town and the children there "couldn't learn". The craziest part were the old folks who refused to leave! I have to assume they were already brain damaged from the lead, because staying in a ghost town full of poison makes zero sense. Sure you have memories there, but make new ones somewhere else! :-O

y great grandmother's obituary appeared on the front page of a Picher Newspaper (?) The obit is very very old and the last line of the headline reads ….LEADER. Interesting comments from that obit state Olive Cully took flight to the Heavenly Father at 1:45 pm….Mrs. Olive Cully came to Picher with her former husband, Mr. Avery, and when he died, as a young widow, she continued to look after their property and conducted a millinery store which she still operated at her death. After Avery's death,Olive married J. G. Cully who survived her, along with two daughters – Mrs.… Read more »

[…] I don't think is accurate there may be more than this out there, but you can read this link: Picher,OK | Abandoned Oklahoma Reply With […]

Not from Picher, of even Oklahoma at all. But, it makes me sick to see you guys having to pull up stakes and leave. The whole area, from the photos looks sad from it happening. I really hope and pray that each and every one from there has gone on to become happy and successful in all of their endeavors.

I had a good friend who ran a junk store and later moved to Miami and worked at the college named Harry Kelso, If anyone has heard from him please let me know.