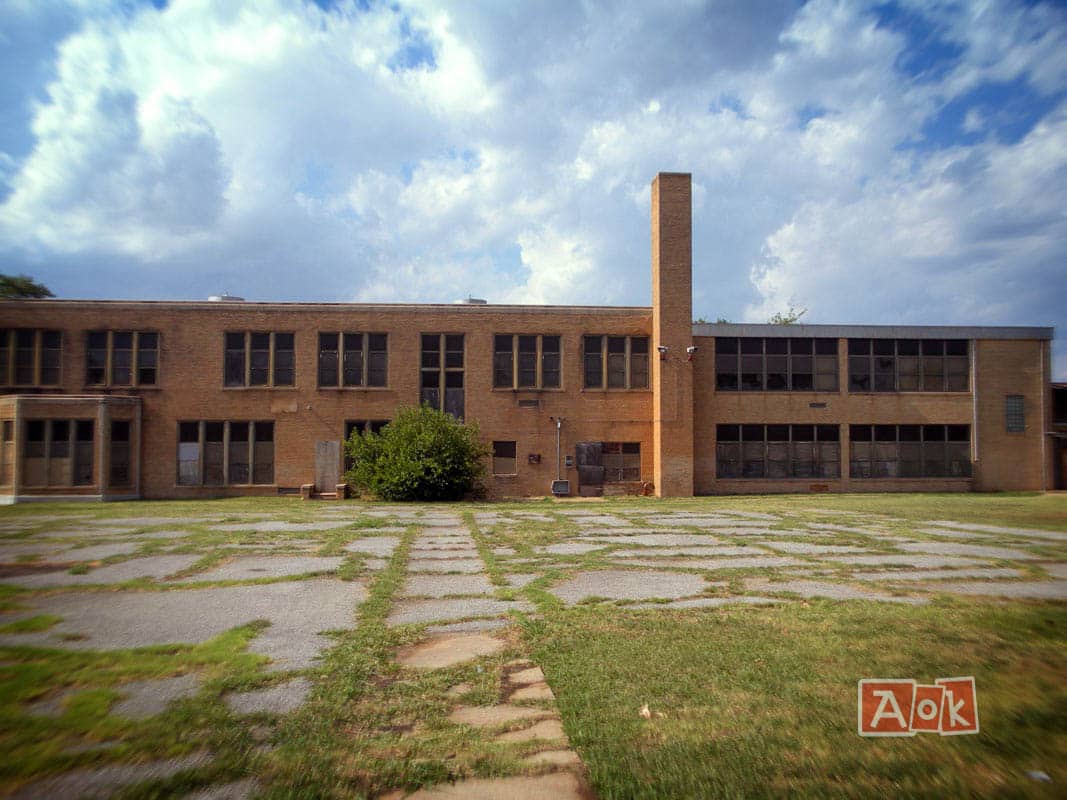 Jefforson Davis School was opened for enrollment in August of 1931. It had a long and succesful run serving the south part of the city immediately south of Capitol Hill. Notably it had several oil wells on the property and one that hit a gusher causing it to splatter the school with oklahoma gold. It closed in the early 1980’s, because of lack of enrollment and district re-structuring. Davis is now serving as storage for beautiful auditorium seating, bus seats and bus driver equipment.

OKLAHOMA CITY — Police said bones that were found at an abandoned school don’t appear to be human, and the Medical Examiner’s office has taken custody of them.

According to an Oklahoma Public Schools spokesperson, the discovery was made at about 10 a.m. Friday.

The school district said the workers have been in the building trying to rid the former school building of asbestos. The school has been closed since 1987 and is set to be demolished.

The Associated Press contributed to this report.

I went to Davis from 1965 to 1972. I have some fond memories from there. I remember Mrs. Foster the kindergarten teacher. And the playhouse in the kindergarten room. Also the tiny toilets in the room behind the kindergarten room. I loved the smell from the cafeteria. It would make me so hungry. Couldn't wait for lunch. Remember playing dodge ball, kick ball, tethered ball, hopscotch, softball, chop sticks, etc.. My mother was heavily involved in P.T.A. .And my sister Sheila Ray went to school there as well. I remember Mr. Lawson my 6th. grade teacher. He made us square… Read more »

We went to school together my name is Rick Holderbee went by Ricky Holderbee I have a twin brother named dicky Larry holder B my oldest brother and Joe the youngest I remember Miss Foster but I was already in first grade Miss Maybry was my first grade teacher second grade was Mrs olivine , don’t remember my third grade teacher his name ,Mrs Curry 4th grade fifth grade Mrs helms 6th grade Mrs Smith oh yeah George Turner’s for sure and mustang feild ,the porters the hatchers the Vincent’s the Perrys and many more we all grew up in… Read more »

My name is Pat. My twin brother Bill and I went to Jefferson Davis School from kindergarten through sixth grade, 1948 to 1955. I lived on 53rd, right across the street, next to the oil well. The little grocery on Byers was owened by my Aunt and Uncle, George and Margaret Turner. My dad, Odie Bradley, was the butcher at the store and used to make hot dogs and chili for the kids who came across the street to eat lunch. In February of this year my Mom, Rosa Bradley, died and we were back to the city for the… Read more »

I remember the Turners and Odie Bradley also a son Dale…. AS I recall Odie was very ill at one time with "Tick Fever" I ran the streets in the neighborhood with Dale Bradley and Tony Darrow…I attended Jefferson Davis from Kindergarten through 6th grade then graduated to go to Capitol Hill Jr…. Prior to graduation from Capitol Hill Jr. I moved to California to live with my Father, Step Mother and half sisters…Where I joined the USAF and stayed for 20 years + Vernon Ray Twyman

I remember except I started at Jefferson Davis elementary at 1966 until I went on to Webster school Junior high,it was a pleasure to go to George Turner’s and I remember farmer the butcher one heck of a good guy and if we had the money we could get a good hot dog and a Coke, through the years George Turner gave us credit Dorothy was a cook at Jefferson Davis as well at Southeast high School if I remember well, as a young adult on my own through one of the worst winters of my life working and out… Read more »

My name is Debbie Cross, Me and my two older sisters went There also. We lived on SE 58th.. I was only there for kindergarten… I remember walking to school with my two sisters across the oil field and my classroom I remember a sandbox and the slide and stage and the toy kitchen. The teachers I remember were Mrs. Mabry sp? And Mrs. Foster. I was lucky enough to see the school in 1985 on a trip back… construction had started.. so sad I did get a brick I remember going to the little store on the way home… Read more »

I live on 55th from 1968 til 2004 when my mom died. I remember mr Smith cooking. Grown ups would eat lunch with us.i remember a kid jumping the fence off the swing set that faced 54th. Getting hit with a rubber hose. Turners grocery was across byers.

I had photos of the school being demolished. Unfortunately, they were on an old computer than has died. I went to school fromm K to 6th grade and completed my grade school years in 1949. The school was truly beautiful and IMO should have been designated a historical building and never razed! I have many sweet memories of the 7 years I attended.

Went to school there Mrs Caffin was the principal,Mes Foster the Kindergarten teacher, Mrs Mayberry,Mrs Greer,Mrs Burns Mrs Hamilton . The smell of the food from the Cafeteria is still a memory,best hot rolls and cinnamon rolls, playing tether ball, playing on the teeter totters, climbing the jungle gym, oh what great childhood memories> I lived on 55th and walked to school on those nice spring days. I can close my eyes and see my classmates and smiles of the teachers and the fear of the pricnipal with her long red fingernails. I can still see the faces of the… Read more »

I drove by the school recently as I did once in a while to reminisce. I had been thinking about it a lot in the few days prior & how I would like to bring it back to life so other children could make happy childhood memories there. I drove around athe block a few times looking for it before I realized I was too late. I even stopped & inquired with neighbors sitting on the proch across the street hoping I was on the wrong street.They confirmed what I hoped wasn't true. I asked if they knew my friend… Read more »

I went there from 1960 to 1966. I grew up and lived one block from the school. Right across the street on byers, was Turner Grocery store. Great memories , thank you for sharing the photo's.

Do you remember a Mrs. Reaves?

My mom went to school there as a young girl and so did my uncles and my brothers and I went there too. I remember Ms. Mabry and Ms. Foster and then Ms. Byford who married and became Mrs. Ballard she taught first grade and Jerry Wallace was the principle then there was a lady I can't think of her name who became principle . Mrs., Brown was the school secretary. My mom was PTA president for many years and helped in the cafeteria. I lived on SE 52 what wonderful memories.

Wonderful site and I really enjoyed reading everyone's comments. Terrible that it is gone…had planned on driving by next trip to the city…don't think I want to now. Wonderful memories in Kindergarten with Mrs. Foster…playing Post Office and House! Remember several of the kids in class with me. Also, Mrs. Mabry in 1st Grade…told my Mom that I would be reading from the newspaper by the end of the school year, and I was. My Mom told this story over and over 🙂 We moved away after 1st grade but I will never forget my first 2 years of school… Read more »

I went to Davis from 78-82. I have so many fond memories. I remember Shelly, Pauline,Phillip,Tony,& Mrs. Lewis, Mrs. Galbreath & Mr Shepphard. I remember plays and festivals in the auditorium, open houses in the classrooms, Landrush reinactment on the playground & lunchroom. I remember the playground, the honeysuckle plant thru the fence between the playground and the house on the other side. The little shop across the st where I used to buy gum for a penny.Fieldtrips,my dad picking me up from school & attending funtions. He's 78 now. I remember my classrooms, the lunchroom, the principal's office, the… Read more »

Went to school here from 68-73, enjoyed the memories. Still live in the area, hated to see it go!! Hope something good comes out of it though. Thanks, Shirley:)

The OKC school district needs to sell some of thist stuff instead of letting it decay. They will never use this school again and it will all be torn down and destroyed.

This place reminds me a lot of the old Columbus Elementary at 25th and Penn, in South Oklahoma. Much of the same type of architecture. Sadly, it looks this building also is being left to hang in the wind.

My mom taught here sometime around 1964-1965. My dad was completing his masters through OCU and she was only here a short time. Her name was Mrs. Reaves. Does anyone remember her?

I remember a few friends i went to school with till this day…Todd…Cindy…Michael…Jermaine…Kerasy…Yurdita..wow it was so long ago