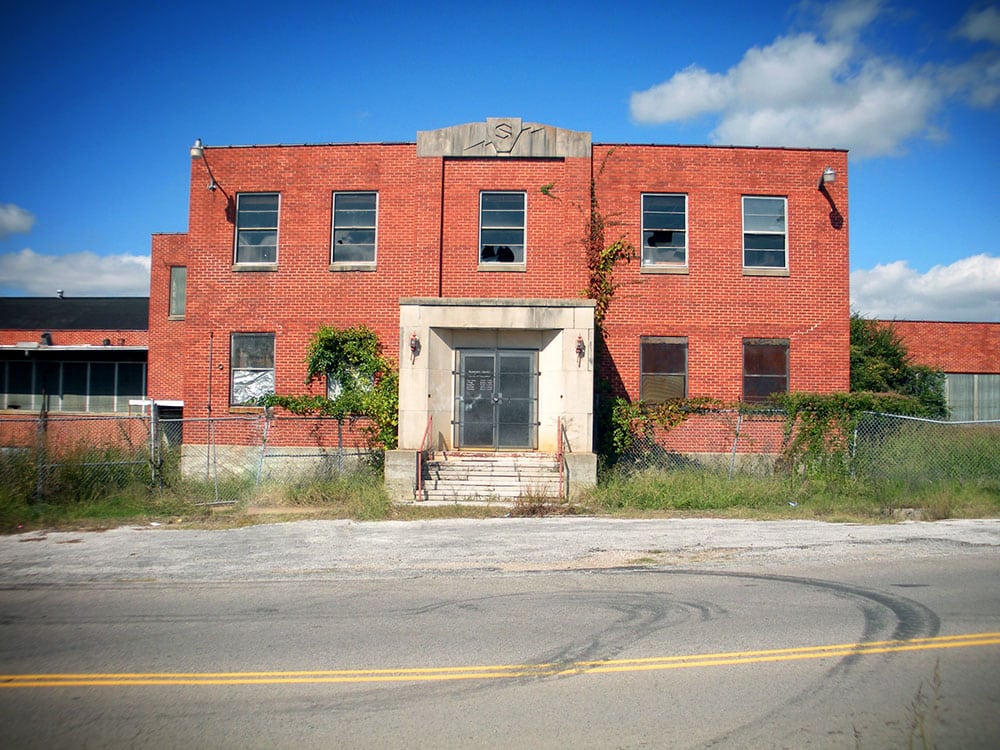 This building in Shawnee was built in 1951 to serve Sylvania Electric Products, Inc. Once Potawatomie County’s largest single employer, Sylvania closed it’s doors in 1961. 550 people were employed by the company at this Shawnee tube manufacturing plant when it closed. It had an employment peak of 1,002 employees in 1953, with 75% being women. The plant operated for only 10 years in the two-story modern plant valued at $3 Million. During the 10 years, an employee strike occurred, with a riot that sent several people to the hospital and eight people to jail. The rapid growth of technology and the low need for receiver tubes was blamed for the plants closing. Shortly after it’s closing, Thiokol Chemical Corp. moved in producing aerospace equipment including equipment used in the Apollo mission. Thiokol moved out in 1965, and Sylvania returned, refitting the plant for production of plastic and metal parts. Sylvania continued operation here for an unknown amount of time, before the building was sold and became a bargain thrift store and ebay auction house. Bargain World closed eventually, and the once thriving plant was silenced forever.
Gallery Below

Someone lives there with there family now.

oh man, its the old bargain barn!!! that was good entertainment!!! bought the worst couch cover from that place in college!!!

Very cool. Sylvania made great tubes. I collect vac tube audio equipment I have hundreds of tubes and I bet at least a few of them were from this plant.

Would you like to sell any of the Sylvania tubes? We are trying to get a collection together of what was made here when it was in operation.

These aren't the cheapest smart bulbs you can buy, but Osram's Lightify LED Starter Kit is more affordable than Philips or Belkin's, and arguably more feature-rich, too. As a legitimate competitor, it deserves consideration.

Before few days ago i visited a electric factory where i saw electric engineer recycle plastic for make different electric product. Really i am very surprised for that. Today i visit http://notonlyplastic.livejournal.com/ where i found lots of valuable information about how to recycling plastic. i am so satisfy for that.

Before few days ago i visited a electric factory where i saw electric engineer recycle plastic for make different electric product. Really i am very surprised for that. Today i visit http://notonlyplastic.livejournal.com/ where i found lots of valuable information about how to recycling plastic. i am so satisfy for that.

Grew up two blocks east of the Sylvania plant and still go by there occasionally. The "ebay" business you refer was not really an ebay business. They bought and sold items via local cable TV. They had a big warehouse and televised an auction from that location. If you won the item you had to go to building and pick it up within 24 hours. A good part of the building was being used. When satellite TV came in and cable wasn't the only game in town the business phased out. And if I remember correctly the "riot" was over… Read more »

Hey Ann, stop by sometime & see what we have done inside.

not creepy @ all. need to see it now.

phyllis if you get this will you please comtact me at HeartOfOklahomaParanormalSociety@yahoo.com thank you very much!

i did send you an email about a month ago & never heard anything from you. Send it to me again & i will check my email this next week to see what you have to say about my Building, "THE PLANT"

the building to my knowledge is haunted i have discovered during some research and filming the interior of this place trying to dig up any paranormal evidence and found some pretty unusual things and have captured a few evp's ,pictures,and video recordings all in personal experiences.

i would like to talk to you. please email me @ mrs.tate@sbcglobal.com. i have a lot more info on this building.

Great comment, love the design of the site too.

good job with the photos. was the safe open? there was alot of old neat stuff there.

No the safe was locked tight. I'm sure there wasn't much inside though. There was hardly anything in the building, and considering its size, its fairly unusual.

we are going to be opening the safe soon. please get in touch with me if you want to know more. the building is now locked & secured. if you want more info you must ask.

Phyllis, are you the owner of the building? Please email me at stevefluke64@gmail.com

dear abandonedok, who would we need to contact in order for our team to investigate this great building?

what do you investigate? i have a lot of info on this building.

i contacted you through the email you provided if you could get back with me it would be much appreciated thanks:)

i have never seen anything from you. try again.

Well thats frickin awesome! Thats a tape of Street Fighter 2 in pic #51 lol
I cant believe they used a building that large for an Ebay shop.