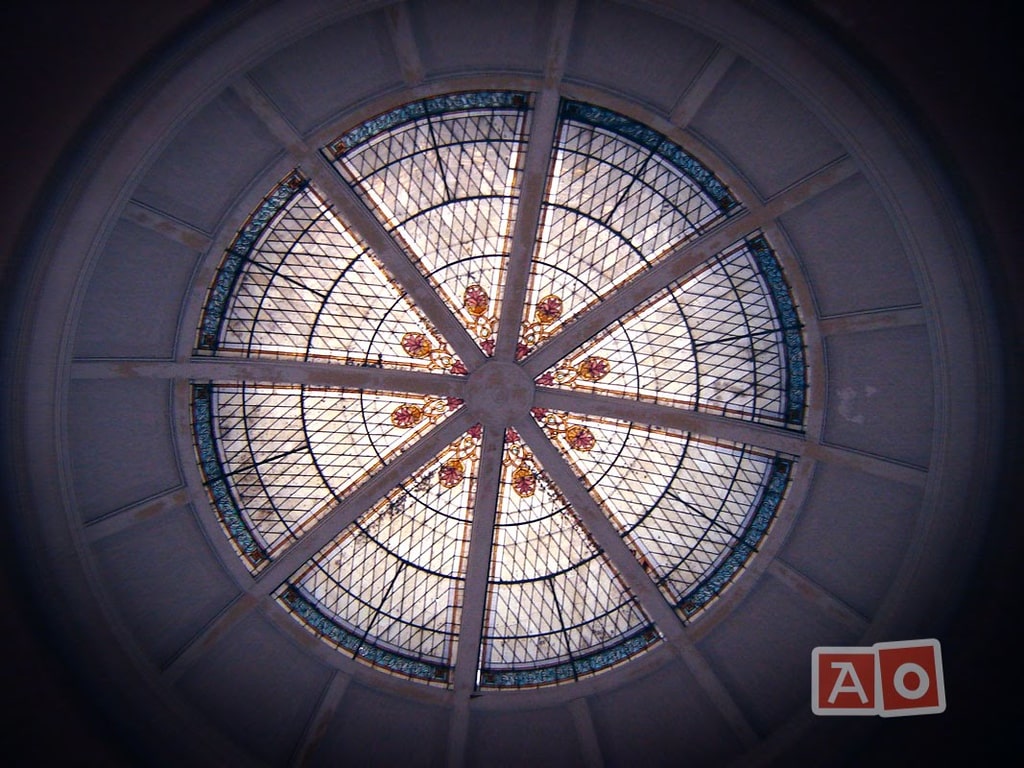 Located in Oklahoma City’s “church row” The center for Design Arts began it’s life as the First Church of Christ Scientists. It was constructed in phases between 1914 and 1918.It has been abandoned for close to two decades. The building itself is constructed in a Classical Revival design featuring four greek columns facing Robinson, with anthemions on each corner of the facade. The lobby is 1,000 square feet and features all original mahogany paneling and wood work. The flooring is laid in mosaic tiling in a criss crossed design featuring a greek key design, also known as a swastika, which before Nazi Germany utilized it was a symbol of luck and good fortune not only to greco romans but also to native americans. Reached my a marble staircase, the main sanctuary is 5,000 square feet. It contains balconies, large windows that look over the downtown skyline. The central feature is an incredible stained glass dome. Below the sanctuary is a 4,000 square foot gathering space with a small raised area.

Following the Murrah bombing in 1995 most of the buildings in the immediate area were damaged, but were repaired. This building however was not. It suffered the loss of most of its original stained glass windows. The upper balconies of the sanctuary were removed due to structural issues.

Several attempts have been made to renovate the building by groups of local architects to no avail. The funds could never be fully raised and finally it was sold to a group from California with the hope to renovate the structure. Now it is for sale again. Who knows what will happen to this building of faded grandeur. Due to local covenants it cannot be razed for the next 35 years.

It has been sold and is being renovated to be offices

This is great news!

Sorry if I'm posting this repeatedly. Is this facility still vacant? For sale?

Does anyone know if this facility is still vacant? Who owns it? Is it for sale?

Does anyone know if this facility is still vacant? Who owns it? Is it for sale?

It's so sad to see beautiful buildings like this just fade away. Hopefully somebody can find the money to save it.

Check out my treatment! http://www.commercialokc.com/1200nrob.html

how did you get in and who did you talk too

go back by the building several of the front entrance area stain glass windows have been broken and are now missing pieces.

Its to bad that this is on the way of demolition by neglect. Since the new owners, several of the stain glass windows have been broken and partially missing, along with several other windows having gone missing and been boarded over. Lets hope that the neglect will not last long.

Excellent post! I've wondered about this church's interior for many years.

This is my first visit to your great blog. It looks nice. Really interesting subject matter. I photograph abandoned stuff around OKC – mostly churches.