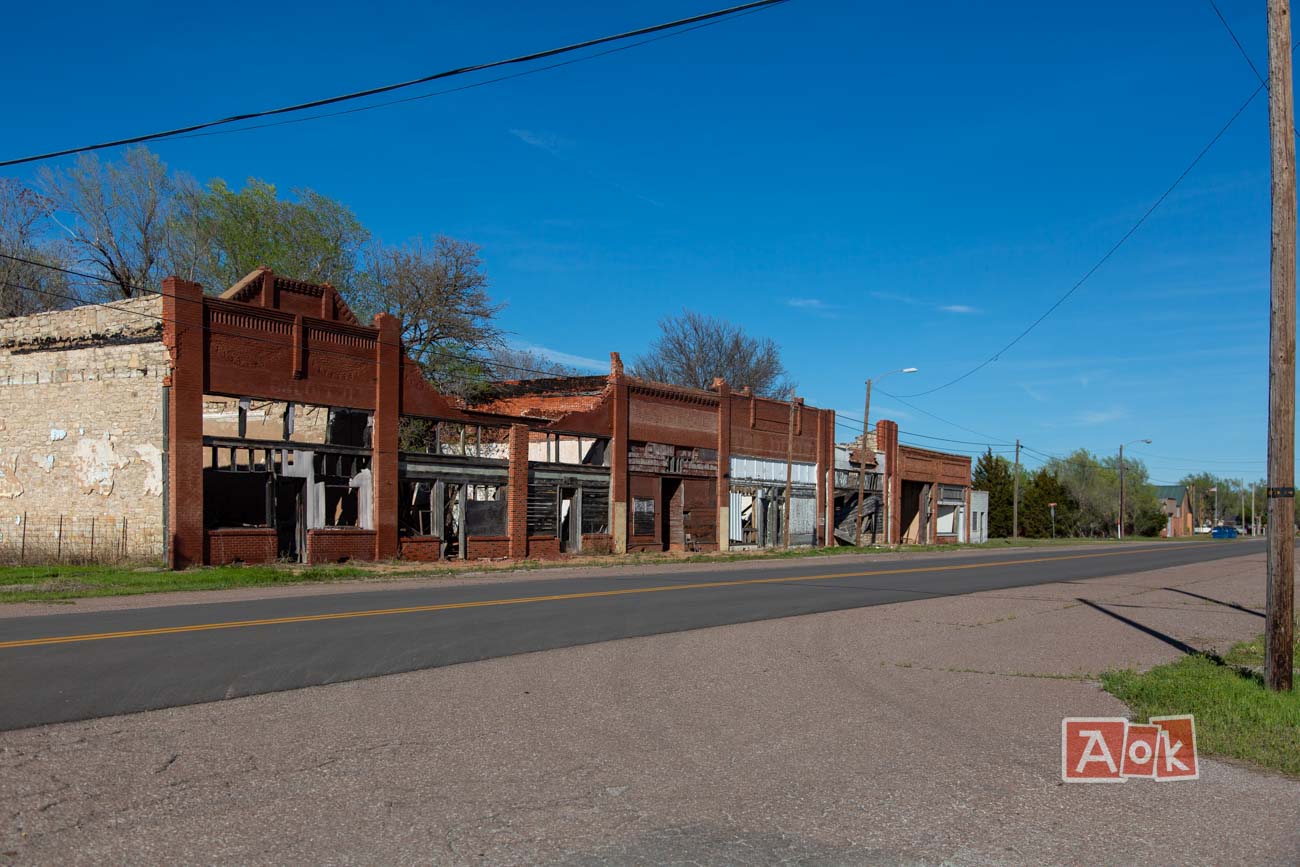 The town of Gotebo was originally known as Harrison Oklahoma, named after President Benjamin Harrison. The settlement was established in 1901 during the opening of the Kiowa, Comanche, and Apache Reservation. A prominent name within the Kiowa area of the reservation specifically was Chief Gotebo, pronounce by the indigenous people as ‘Kau-Tau-Bone’. In May of 1903, a disastrous flood swept through the Rainy Mountain Creek in Kiowa County. The family of Jasper Briles was met with tragedy as Jasper and his eldest son Roy were swept away, holding on to a tree. His wife, Hattie, and their other son were swept away with their home, into the floodwaters. The next morning Chief Gotebo heard the pleas for help by Jasper and Roy, rescuing them. Word spread around the town quickly and thus the small town of Gotebo was formed near Harrison in honor of the Chief. Harrison was annexed into Gotebo in late 1904 and soon had its own Rock Island Depot making it a convenient stop for shipping goods.

Gotebo had a boom not related to oil which made the town last much longer than the nearby oil towns. Most of the people just on the outskirts of town had jobs in agriculture and cattle. Wheat and cotton production was abundant and provided pretty stable shipments. Newspapers throughout the years have been Harrison Gazette, the Gotebo Herald, the Gotebo Gazette, the Gotebo Record, and the Gotebo Record-Times. The trading town boomed with many businesses and by 1930 the population had reached over 800. Unfortunately, like most small towns, the resources eventually ran out and many moved away to pursue better incomes and be a part of bigger developing cities. Although many people have come and gone from Gotebo there is a community of around 200 that still call the town home.

“I was born and raised here, went to college and then moved back to raise my family here which is very rare. There is only a handful of us that stayed here or went to college and came back. Unless you have deep roots in a rural community like Gotebo, there is not a lot to offer or intrigue some people. I drive 20 minutes one way to work every day and my husband commutes an hour one way. Some people may think that seems like a lot but I wouldn’t trade it for city life or traffic,” said resident Mindy Shields Dooley. Starting in 1996 was the ‘Gotebo Getdown!’ an annual festival held on Saturday of LaborDay weekend. Guests enjoy live music, a parade, food, games, and an auction. The event has been going on for over twenty years and shows no sign of stopping anytime soon. Just recently another annual event called ‘ Gotebo Trade Days’ that features over a hundred vendors giving all of southwest Oklahoma fun and games such as music, pony rides, corn hole tournament and a bounce house. You can stay updated on all Gotebo events through their Facebook page.

The H.H. Wedel Department Store started in 1903 out of a frame 24×40 building, with limited finances he had to secure credit references from past employers in Kansas. He bought half cases of food, one sack of sugar, and everything else in small amounts totaling to less than $200.00. After exponential growth, Henry Harry Wedel upgraded to a brick building off of the main street. Although it was completed in 1908 per the date at the top of the store, it had its grand opening on March 26, 1909, with a small crowd of people. By 1915 his department store became one of the largest, most successful businesses in the county. They regularly carried more than $50,000 in stock at any given time and made around $100,000 annually while employing twelve people. On a day-to-day basis, the department store provided dry goods, clothing, shoes, groceries, and furniture. 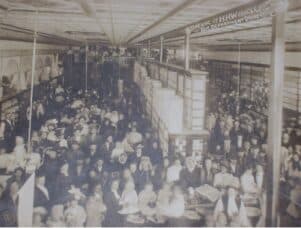 A newspaper article dating December 19, 1918, states that John Bradley and M.E. Anderson were placed under arrest and put in jail after being charged with larceny. Both were accused of breaking into the Wedel Department Store and stealing a large quantity of merchandise. Over the last couple of years Henry Wedel had noticed items from his store randomly going missing but with no signs of a break-in was at a loss as to how the thieves were entering the building. He hired a private detective to stake out the premises and catch the burglars in the act. M.E. Anderson was suspect and searched and was found to have a large sum of stolen merchandise on his persons, to which he then confessed to stealing and implicated two other men. John Bradley’s home was searched and 15-20 pairs of shoes, ginghams, bolts of silk, men and women’s clothing, food, harnesses, and many other items were found. At the home of Frank Hendricks, the same was found and they both were arrested and charged. 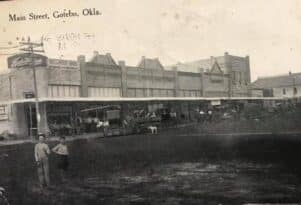 The entire downtown strip of buildings were built around the 1904-1910 period. This made up the business district, the heart and soul of Gotebo as a trading town. The strip consisted of H.H. Wedel’s hardware store, The Grocery Mart, The Dixie Variety Store and many others. One building that faintly has the words ‘Town Hall’ above it was a small movie theater in the late fifties and sixties.

The Dixie dates back to the 1910s when it was known as Dixie Dry Goods Department and later being simply known as The Dixie Store. Trademarking themselves as the ‘only one-price show store in Gotebo’ with the lowest prices. They received goods from trains that came from the East and like the nearby H.H. Wedel store had no issues in making a profit. They strived to show the people of Gotebo and surrounding communities that they had unbeatably low prices and quality of dry goods, shoes, clothes, etc. The Dixie can still faintly be seen on the facade of the vacant building that sits apart of the derelict main street.

This bank was built in 1902 and named Bank of Harrison after the town’s original name. A one-story gypsum rock building that bears the classic canted entrance that most banks in small towns had. A date on the front step dating 1934, a date when the building was used as the Gotebo Post Office. In March 1908 President D.T. Dunlop and Cashier F.D. Lucas announced that The Bank of Harrison had changed its name to Oklahoma State Bank of Gotebo, Oklahoma. In later years after the post office had moved and the building was vacated the American Legion Post 190 moved in. The Legion regularly met on the first Tuesday of every month.

The community of Gotebo celebrated the dedication of a new school on January 22, 1956 to kick off the new school year. The Mothers Club served coffee and donuts as refreshments to those attending the open house for the building. Superintendent Elwood Riley was eager to have the building pass its inspection test and the student lockers to be completed so that they could move the students into the new school which was the pride and joy of the town. It wasn’t long after that the Gotebo School Board of Education were discussing a $115,000 bond issue for adding a new gym and storm shelter to the plant. The First National Bank of Oklahoma City purchased the bonds allowing construction to commence on the new school gym and storm shelter. Work was completed on the Physical Education building around the second semester of the 1962 school year.

Unfortunately, the population of the town continued to drop, the 1988 graduating class only having five students. The town was unable to keep the school open and had no other option but to annex their schools with the nearby town of Mountain View in 1990. Students were transferred and the building continued to be used for students in fourth through seventh grade and then eventually moving to just fourth through sixth grade until 2000. Today the buildings are privately owned and no longer used as a benefit to the community.

Click on the Thumbnails to View the Galleries of Gotebo, OK Below

I graduated from Gotebo in 1978. I wish I had the paperwork seen here for my journal. Thanks for the trip down memory lane.