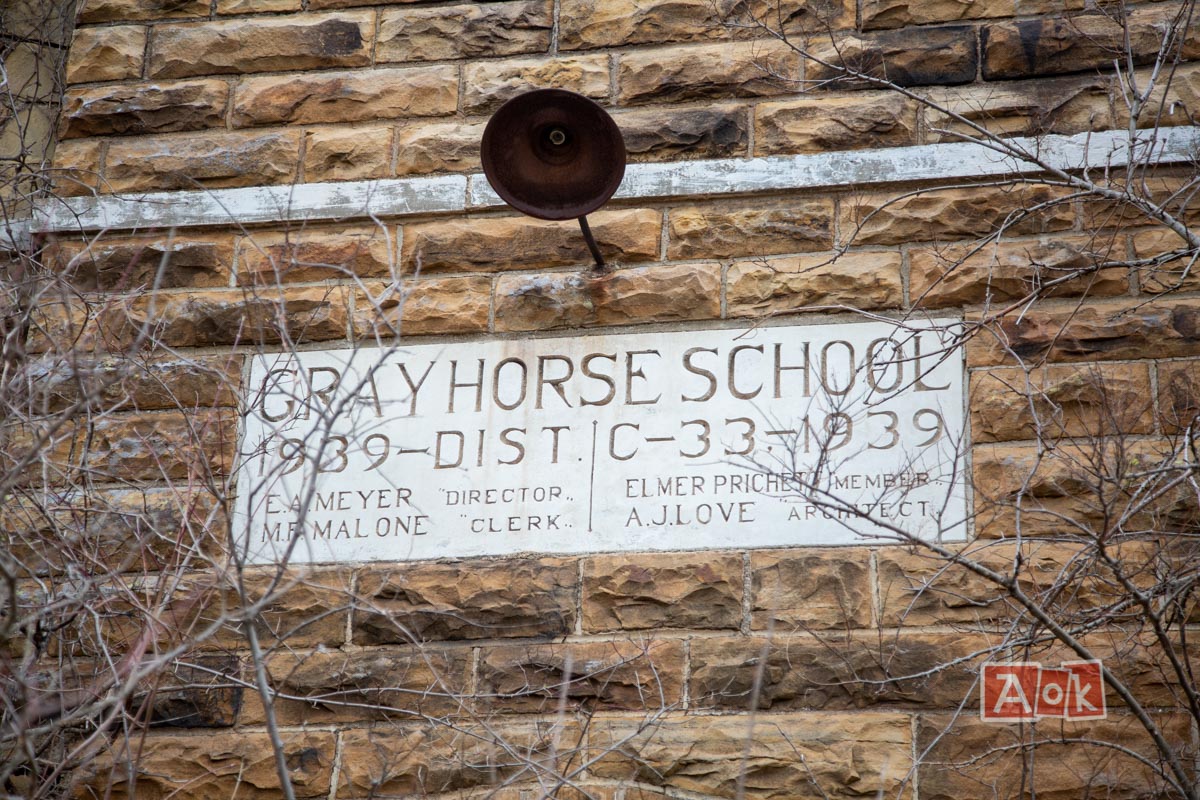 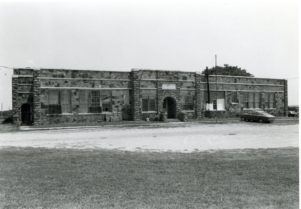 Gray Horse School which can also be spelled as Greyhorse or Grayhorse, was constructed by the WPA in 1939, the architect that designed it, AJ Love was a popular designer of 150+ buildings in Northeast Oklahoma around the ’20s and ’30s. It is speculated that Gray Horse was one of the last buildings he designed. The rural school was unique with its use of cut and uncut limestone, quarried sandstone and native fieldstone to construct the outer walls and arched entryways and was the biggest building in the Osage Indian ceremonial town. Inside, the layout was four classrooms down the right corridor, when photographing this area it gave a chilling reality, all of the classroom doors were still open ready for the students that would never walk through their doors again. To the left was the gymnasium and auditorium where lunches, games, and often times social events according to predated local newspapers. It taught Kindergarten through 8th-grade and held annual graduation ceremonials for the Kindergarten and 8th grade students when the school year was complete. The atmosphere of Gray Horse’s School and community was filled with success, generosity and determination.

“My fondest memories were the box suppers, we would decorate our boxes that had food in them and they would be auctioned off. I won 3 years in a row and ended up in The Fairfax Chief  about my box that won that year. They would line our boxes up on the stage and i just remember being so proud of having my box up there. I attended 1st through 4th grade there, seems I probably had 6-8 classmates. The school had a bus that would pick us up at the end of the road by my mom’s farm.  The school was heated with coal as the coal pipe was a no-no to go near!” remembered Sylvia Irons Whittaker.

Gray Horse’s colors were Kelly Green and White, the basketball team was great and won many trophies over the years. At recess students usually played basketball in the gym. They often played Burbank, Ralston, and Red Rock in elementary tournaments.

The school was made up mostly of Osage Indian children from nearby areas, the opportunities with education and jobs made the Gray Horse school a fundamental structure to the townsite. The Naval Reserve which was important as it was the reason for the Gray Horse schools’ existence. It supported the families working in the Naval Reserve oil field and Grayhorse.  A year before closing in an attempt to help and save the school, board members voted to sell $7,000 in bonds to make repairs to the school and install a new heating and cooling system, remodel an old building on the school site to be used as a bus garage, as well as purchase new furniture. But in 1963, Gray Horse School  District 33 closed and consolidated with the nearby town of Fairfax like a few other schools in that area such as Ralston and Burbank.

Assistant Principal Chief Raymond Red Corn of the Osage Nation attended an auction on June 10, 2019, to bid on the Gray Horse School. Sealing the deal with a winning bid of $1,775 Red Corn said “The masonry looks solid and in good shape. The steel I-beams in the gym also look good. Anyone wishing to repurposed the building would have a challenging demolition of the remaining wood frame, but beyond that, it certainly could be successfully repurposed. Before 2006, we repurposed historic building shells in downtown Pawhuska that were in similar condition.” The Osage Nation is interested in restoring and re-purposing the school back to its former glory but official plans for the school haven’t been made yet.

Birth of the FBI

This small unsuspecting town was at the center of the birth of the largest national security organizations of the United States. A historical event that has largely been forgotten, known as the Reign of Terror and or The Osage Murders occurred here. One of the United States largest oil fields was discovered in Osage County near Gray Horse. The Osage Tribe became owners of a $30 million fortune almost overnight, the U.S. Government assigned white men to guide and guard the Indians on how to manage their new riches. With these new “guardians” followed a trail of fraud, greed, abuse, and murder. Over the course of several years during the oil boom there were over 60 suspected murders of Osage Indians with the motive to obtain their fortunes. This led to the birth of the FBI, many of the cases were said to investigated but most weren’t prosecuted and punishment was never handed out to those responsible. In 1925, Congress passed a law limiting inheritance of the fortunes to heirs that were half or more Osage. This prevented whites from stealing more of the oil money through marriages and murders. Killers of the Flower Moon is a book that addresses the Reign of Terror and goes into further detail.

Special thanks to Don Taylor, Sylvia Irons Whittaker, and Mary Hocker for their help.