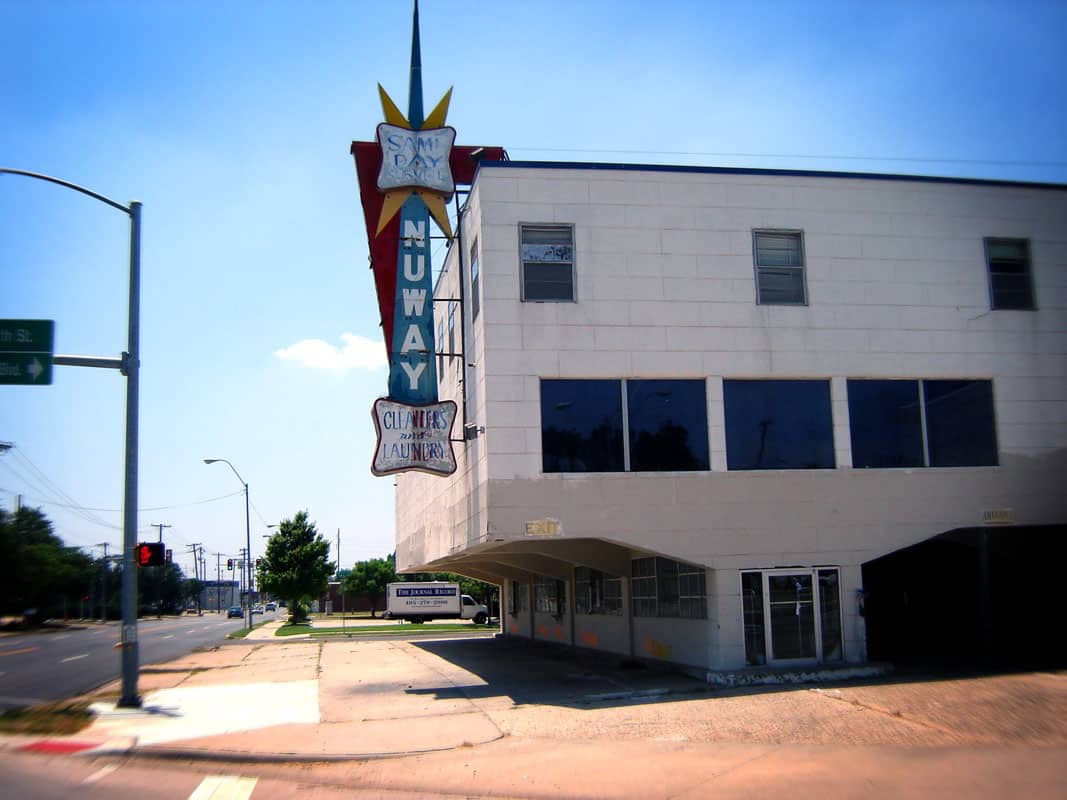 (Nu-Way) NuWay Cleaners was constructed in 1918 on the corner of 6th and Western Ave. While there were multiple other NuWay Cleaner businesses around the city, this one stayed in this location during the entire life of the business. Property manager W.H. Smith helped push the business to success during the 1920s when laundry businesses boomed. He always did his best to give absolute satisfaction to his customers. A nearby competitor which has since been beautifully restored was the Sunshine Laundry Cleaners just a few blocks over.

Numerous ads appeared in local newspapers advertising their expertise and knowledge in the laundry business, promising to have your suit returned to you by 5 pm! Even offering a popular 50 cent special without diminishing the quality of service. They were quickly inducted into the Oklahoma City Cleaners and Dryers Association, which always gave a stunning recommendation of the company in newspapers. In the mid-1930s they became licensed sanitone cleaners. Sanitone was something that made a dry cleaning business stick out from the rest.

During the 1970s the second floor of the NuWay Cleaners building housed four apartments. Those tenants occupying the building would have to be evacuated on June 16, 1980, when a two-alarm fire occurred in the apartment of Elaine Marshall. Around 6:40 pm firefighters stormed the building and started evacuations of the tenants down the fire escape. Elaine Marshall said the fire started in her apartment but she was unsure what caused it. Damage to the building and its contents totaled around $10,000 and all four apartments were damaged.

Again on July 7, 1990 the building experienced a substantial fire, this time a three-alarm. The cause seemed to be from a cutting torch being used in an area of the building under construction, which then quickly engulfed the particle board in the ceilings and roof. Employees thought they had put the fire out themselves the day before but unfortunately, it continued to smolder. The damage to the building surpassed $50,000 but no one was injured.

Nu-Way Cleaners closed in 2001 due to a lack of business in the downtown area. But just a few short years later the nonprofit LoveLink Ministries began leasing the buildings for use as a recovery program, food pantry, and craft shop. Things were slow going but often received help from the community. It wasn’t until years later that they opened it up as a thrift store as well to further support their efforts to aid the surrounding area.

Occupying the building until 2019 when their nonprofit began to diminish and no longer could afford to keep the property. In August of 2021 the property was purchased by Shyon Keoppel and Millenial Capital with hopes of revamping the 77,000 square foot property into office and retail spaces.

Gallery Below of NuWay Cleaners

My dad worked for NuWay for many any years. I spent many day at the cleaners after school helping and getting to know people. The owner, Pat Denham and his daughter Mandy were really good people. Pat died after my dad retired, but I believe it was a boating accident. NuWay used to do the table clothes for El Charito. The laundry smelled like mexican food and birds would stand in the floor and nibble on the random chips that would fall out of the linens. Good times!

His daughter’s name is Mindy. This Pat Denham did not die in a boat accident, his father did.

pat Denham had a cabin and a large boat. Pat was trying to start the boat and it exploded. He past away from the accident!! This was in the early 60’d.

Who was your Dad? This is Mark Denham.

I heard the original owner was killed by the mapfia during proabition days back when my dad was a kid for selling booze. Owner of Byrons liquore was attacted a about the same year back in the days.

This was my family’s business, I grew up in that building, worked there. I’m Mark Denham.

[…] notices because of a shutdown to install boiler equipment and that arrangements had been made with Nuway Laundry to employ them until Sunshine was back open. But Webb said management failed to keep their word […]

New customer at this joint. So far so good. Very convenient location and great prompt service. Family run and friendly. In addition their price is no different compared to any other cleaners in the area. The work they do is fantastic.

The post on the abandoned runway cleaner proved to be a good one. I am so fond of these abandoned places and this site has helped me a lot to know more about various such places in Oklahoma. Keep up the good show catalina island hotels

I do like that writing on the wall in pic 060. I might put that on my myspace!

This building has been purchased a few years ago by a compassionate ministry center called Love Link Ministries. They are currently in process of renovating the building and hope to be in the Nuway building by the end of this year. I know this because I am on staff at Love Link.

Hi thanks for posting the pictures of Nuway….You said they closed in the early 1990,s. You sure it was not in the mid 2000,s. In Moore off I -35 there was a Nuway cleaners the building with the gold dome.When Moore had that tornado in 1999.the Nuway was damaged and then rebuilt…they were there till 2005.and then it was sold to a stone slab store….Thanks

This building is a beautiful example of Art-Deco Streamline moderne. It is perhaps the largest and most elegant representation of the style in downtown OKC. I am excited to know that there are plans to reinhabit the building. Hopefully OKC will participate in the refurbishment of the fabric of the building and its interior to the fabulous 20's and 30's era of its origination. The community would be well rewarded in investing in this landmark. What an addition such a beautiful and hisoric builidng would be to the new downtown area. In the multitude of brick its pristine white and… Read more »

Thanks for your wonderful commentary on this location. It is great to see that there are others who can appreciate specific design motifs and architectural accents in a building in such a state as this. Thanks

There was a truck driving around inside of the building! It was really strange. We bolted after the sighting.

Lol!!! Yes, Fiend & I know all too well about bolting from trucks! its happened to us twice now.
Once at the Lincoln powerplant & once at Chilocco!
Why cant they just let us explore in peace!!!!

Oh!! I remember the best of times in 1965 I was in the Army at fort Sill Oklahoma I stop in O.K.C.and I met three of the BEAUTIFUL'IST INDIAN sisters. I still have their pictures under glass on my dinning table. One of them worked at NuWay Cleaners.I left the Army in 1967 and came home to Florida.I stared a Veterans park in my home town of Ponce De Leon,Florida I would like for all veterans to join us we are a (non profit org) visit us some time. poncedeleonfl.com.Oklahoma City is a beautiful place.

Yeah, looks like the ravings of a madman to me. Very cool building though. I noticed you took a few pics through windows, had some trouble getting inside?

weird yes. I googled a lot of the phrases and the websites, and from all I can assume, is that some homeless mentally ill person had converted the walls into their own personal note pad… kind of strange. Do some google'ing…

All that scribbling on the walls was really weird! Could you determine what that was all about?

Random ramblings of conspiracy left behind by transient population with clear mental illness. I’ve found entire note books like these. Literally a chain reaction style of thoughts that oddly link together but then don’t at all.