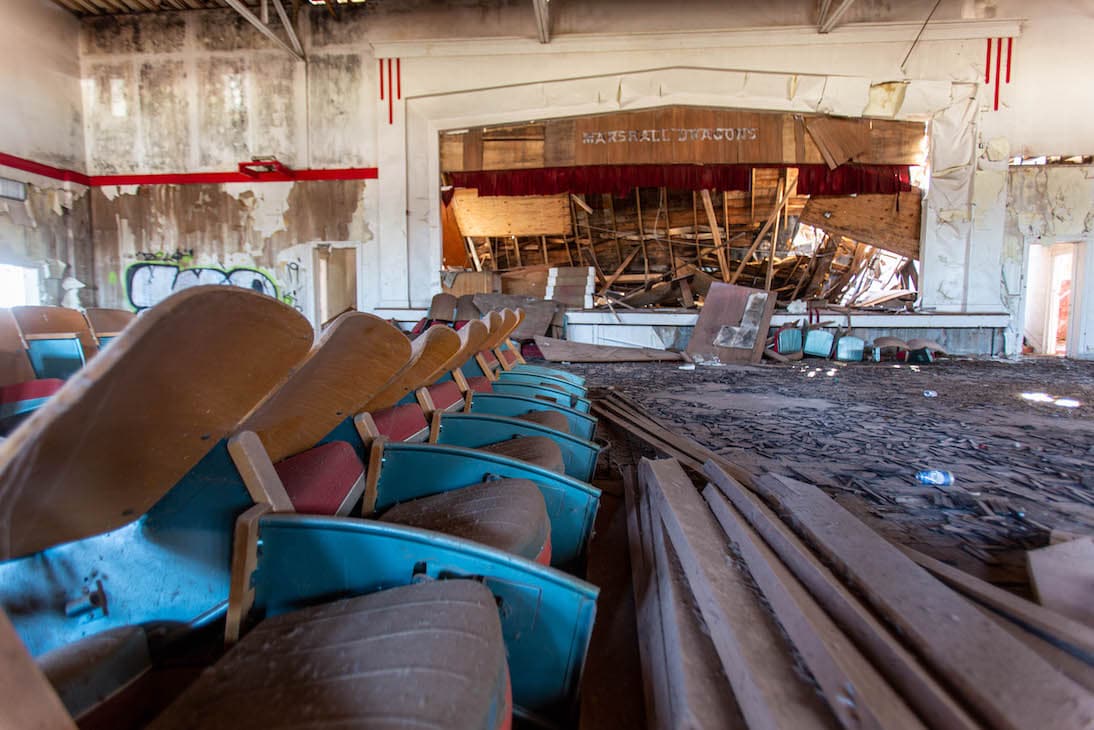 Today, the quiet town of Marshall sits with a population of around 300 people and a very wide Main street that was once home to parades, large farms, school children playing and an area that encompassed close-knit friends and families. Driving in to town, you can see the remnants of what used to be a thriving community: Empty storefronts, foundations and a few churches that still hold service every Sunday. However, if you look past some of the houses a couple of blocks from Main Street, you will see a boarded-up school with broken windows, falling bricks and a fading image of the Dragon mascot that is still an icon for some in the area.

“It’s just sad to see the condition it is in now… I played a lot of basketball on this floor with Coach Theilen.” said Debbie Gregg. Gregg, who now lives in Yukon, grew up in Lucien, Oklahoma; a town about 30 minutes outside of Marshall. When Gregg attended the middle school from 1975-1978, Marshall was a consolidation of other neighboring towns including Douglas, Hayward and Covington. “It would take over two hours to get to school and two hours to get home by bus. We had to stop in at all of the towns and some of the farms on the way. Getting to and from school wasn’t my best memories of that time, as you could imagine.”

The original Marshall School, Kindergarten through Middle School, was built down the street from the now torn down High School. It was built in 1904 as a two-story structure until the 1950’s, but when Marshall consolidated in 1950’s, expansion was needed. The second story was demolished and a new entrance was added to the south, doubling the size. In this renovation, they removed the slanted roof and added decorative brick and stone parapet around the top. They also rebuilt the front entrance to match the new entrances on the sides of the addition. The final phase of the building opened in 1952.

They built the long modern yellow brick structure that is now the front of the school building. Later, there was another small addition connecting the school to the gym. This final addition has a stacked stone façade with the words “Home of the Dragons” painted above the door.

According to the 1930 edition of the Marshall Tribune newspaper, a gymnasium was added within stone throwing distance. The new gym was completed by January 3rd and was first used when the boys and girls teams of Douglas High School played the Marshall teams. At one time, this gym was used for everything including plays, school band performances, conventions, church events, etc.

However, Marshall was most recognized in the 1930’s to the 1950’s for their School band. Area schools would come to compete and march down main street. It was known as “The Biggest Little Band Festival in the World” and was held from 1938 to 1951. It was founded by Tibby Shades (school superintendent) and Ashley Alexander Sr. (band director). It grew to such magnitude that WKY radio out of Oklahoma City broadcast the marching band performances held on main street. The Oklahoma Highway Patrol increased participation on festival day to assist with the traffic situation. Fifty-Seven towns converged on Marshall in 1951 to participate in the festival with sixty-five performing groups. It is believed 5,000 participated in the 1951 festival. It was cancelled in 1952 due to the state band contest being scheduled on the same date and was never revived.

By 1976, the middle school graduating class number was steadily decreasing and the Covington School District decided to consolidate the Marshall school. Students in high school were consolidated to Covington in the 40’s, but now, the only existing school in the area was in Covington. “Going to high school meant going to a new town, but at least it was a way shorter bus ride for most of us.” Gregg stated. “It was something we all looked forward to and didn’t.”

Although the school consolidated in ’76, the facility was still used for many years after. The building housing the gym and home economics room was rarely used after the shut down, but it did stay in occasional use until the 2000’s for alumni and town events. As of 2012 it still had electrical power and was then left to the elements. “I did attend an alumni dinner with my grandma in that gym in 2006. It looked to still be in great shape then.” Marshall historian Lane Howerton mentioned. “They had tables set up on the basketball court floor and there were speeches and entertainment from the stage. I am not sure if the alumni ever met there again after that.”

When observing the interior, a number of books were scattered on the floor. Checkout cards from the 1960’s indicated they were originally from the now closed Marshall Library. A sign on the exterior of the building lead us to believe a new library “Angie Debo Memorial Library” opened in some of the classrooms until the building’s condition wasn’t up to code. The school is now mostly cleaned out and the once thriving educational building is now in shambles. The floor has caved in, revealing the basement to sunlight and the remainder of the gym has been stripped out.

The town of Marshall is actively looking to demolish the building as soon as possible because of safety risks. Soon nothing will be left of the old Marshall Oklahoma school, Home of the Dragons.

I attended Marshall Middle School after they consolidated with Covington-Douglas 5th through 8th grade. I do have annuals from that time. I went there around 1975-1978. We had a 8th grade graduation and dance every year to move on to high school in Covington. I lived in Lucien, Ok and had to ride a bus around two hours every morning and when school was out to get there. The bus coming from Marshall and the bus from Covington would pull off of Hwy 74 and the bus drivers would trade places. The school was already in disarray when I attended… Read more »

MY MOTHER MARY ISABELLE MC DONALD, AND HER BROTHER, ELTON MC DONALD BOTH WENT TO SCHOOL HERE. THEY WERE IN THE GRADUATING CLASS OF 1933. I HAVE A PICTURE OF THE CLASS, AND THE NAMES OF EVERYONE IN THAT GRADUATING CLASS. I ALSO HAVE MY MOTHER’S RECORD IN A SPIRAL NOTE BOOK, OF DAY TO DAY HAPPENINGS IN HER SENIOR YEAR OF HIGH SCHOOL. FUN READING! I WILL TURN 78 IN DECEMBER. I WOULD LIKE TO TURN IT INTO A SHORT STORY, BEFORE I GO TO THE “HAPPY HUNTING GROUND”. PROBABLY NOT POLITICALLY CORRECT??? FEEL FREE TO CALL ME AT… Read more »

Did you have any problems getting in to take the pictures? I would love to see this place in person.

I just took some of the very same pictures of Marshall this past week.

Awesome! Where can we see them?

That gym is so sad. It looks like it was beautiful at one time..

I went to school there in the 5th and 6th grade. They closed it down in 1987 and moved us all to Covington. The gym was used for community events for many years until it fell into disrepair. It’s sad to see it this way. My mom also taught there before I was born.