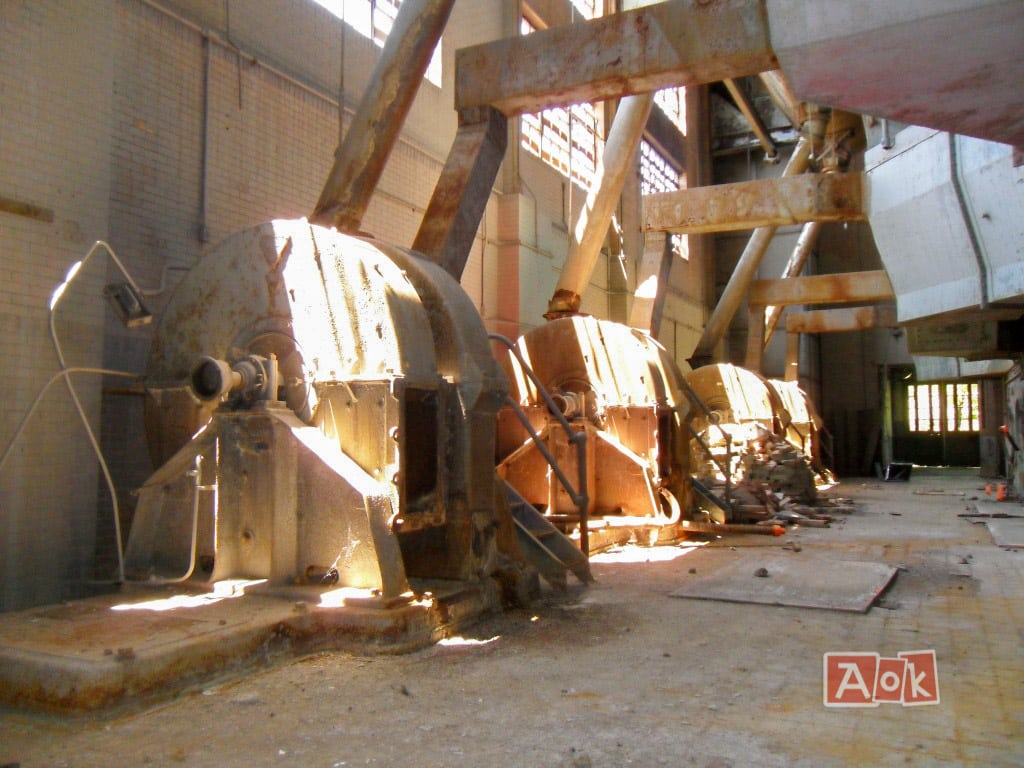 The Oklahoma Gas & Electric Company had been serving the territory since 1902, predating statehood. The only two cities it served at the time were Oklahoma City and Enid but soon grew to serve more than two-hundred and fifty cities throughout Oklahoma and Arkansas. In 1929 the Osage Generating Plant was built in the town of Ponca City right along the Arkansas River. Being one of seven owned by OG&E it was the third-largest plant in the company producing 16,000 kilowatts. The station was so advanced and efficient that it put out enough electricity to power 750,000 lightbulbs at the same time.

By 1949 the company had grown exponentially and the Osage Generating Station was enlarged with capacity being upgraded to 26,000 kilowatts. As big as the facility is only thirty-six men were employed there at this time. A big consumer of the electricity produced by the company in Ponca City was the Continential Oil Company’s refinery. The entire company consisted of seven large plants and three smaller ones, all connected by a web of transmission lines. This allowed for security if one plant were to be rendered completely disabled then the other six stations could absorb its electric load.

“From the time Oklahoma Gas and Electric (OG&E) first learned that the National Oil Company (Natoco) wanted to build a plant to supply its own steam and electricity for its refinery in Ponca City, Oklahoma, Robert Patrick James, OG&E’s director of Capital Projects, had treated it as both a serious competitive threat and a strategic opportunity. OG&E could not say goodbye to its third-largest customer, particularly at a time when reduced demand had left the utility with 30% reserve capacity. Other electricity rate payers would then have to bear the cost of Natoco’s lost contribution to fixed charges. As the industry moved toward increased competition and decreased regulation, OG&E very much wanted to send a message to Natoco and every other industrial company in the state that it was willing to serve all the needs of its customers. The concept was a dual use of energy: once to drive an electric generator, and once again to produce steam.”

Water from the neighboring Arkansas River was carried inside to its boilers, which were heated with burning coal to produce steam. This steam was then used to generate electricity for Ponca City and many other Osage County towns. The plant was never updated in terms of equipment and was one of the last power plants in Oklahoma to manually employ steam gauge operations. Altogether the operation was successful for fifty-four years total.

“While we had the latest technological advancements that were available in 1974 when our plant was designed just down the way, the Osage Generating Plant was using old mechanical instruments that measured actual pressures and temperatures. What this meant was that when the pressure gauge registered 1000 pounds of pressure, it was because the pipe that was connected to the back or bottom of the gauge had 1000 lbs of pressure on it. I don’t know. They may have had a regulator on there that cut the pressure down to a safer range. That would seem crazy to anyone today to think that behind the Control Panel in the Control Room were pipes that ran from different steam pipes all over the plant to the gauges on the Control board, so that the Control Room operators could operate the plant correctly,” said a worker of the coal plant south of OGS.

At some point after the late 1970s, it became known as the Lincoln Beerblower Power Plant. The plant closed in 1983 and it was soon discovered that some of the old machinery was leaking toxic chemicals and the site was surrounded by high levels of asbestos. The old plant was sold in 1986 and salvage/cleanup operations were underway and asbestos was being removed illegally. Workers were under the impression that they were just salvaging old equipment from the plant and helping make the property more presentable for future investors. The workers were never made aware of the harmful chemicals and asbestos they were inhaling while working on the grounds. The Department of Labor shut down the entire salvage operation in 1989 and the Health Department came to test the soil on July 28. Asbestos levels ranged from 25-85% and there were tens of cubic yards of asbestos material strung about. The Dept. of Health ordered the immediate sealing of the building which helped bring toxicity levels of the site down. Around 2009, vandals had wreaked havoc on the site busting out a lot of the windows, kicking up contaminated soil and materials making the area highly toxic again. It was listed as a Superfund site by the EPA, and a four-year cleanup followed, they removed the asbestos and the old chemical vats and scrubbed the place until it was no longer a danger to the outside. Unfortunately, they had to remove many things compromising the structural integrity during the cleanup, leaving the building extremely unstable. And after several unsuccessful demolition attempts, including one in 2006, the old plant continues to sit.

THIS LOCATION IS EXTREMELY DANGEROUS AND SHOULD NOT BE GONE TO! IT IS STRUCTURALLY UNSOUND AND STILL NOT FULLY CLEANED UP BY THE EPA!

Gallery Below of Osage Generating Station

I love this site. Used to visit often with friends until we were arrested for trespassing. Be very careful if you go exploring, not only for obvious safety reasons, but as I unfortunately discovered the owner will not hesitate to press charges. Thanks for the pics. They bring back many good memories. P.S. It's worth noting that the plant seemed extremely haunted. Three of my friends and myself heard a very strong soprano voice emanating from the basement. We heard it twice, and went down the stairs on the south end of the building, only to find that the lowest… Read more »

my friends and I explored and we heard it too. Singing from a hole in the floor.

I would like to know about a the existence of a dark history, as well. I know from his wife that a man, Bobby Gene Behrens, lost his life there in 1985. There was no elaboration on how it happened but it piqued my curiosity. I can't find any mention of it on the Internet so far.

Been there a time or two. Place is dangerous and falling down.

What's the coal room look like or what was in it?

Has anyone been out to this place in the last few months? Would like to know if it is still there. Looking at the Google satellite map, it looks as if demolition has started on the North End.

this place is awesome BUT DANGEROUS, been there about 8 times at least, the basement is freaky i got creeped walking down the stairs in mid day,and i couldnt see nothing, pure black. rattle snacks were in there because of the river, tiles falling from under my feet. staircase were not very stable at all. i enjoy creepy places, and there was a coal room too i dont know if there is pictures i didnt see any.

Wow, you totally answered part of my question. Would love to know the history too.

Is this place haunted? It certainly looks it and has the vibe. Very creepy seeing it on youtube.

Got some bad news. The smoke stacks are now gone, and it appears that the greedy owners are scrapping the place. That's why they took down the smoke stacks, lots of steel. Since its being scrapped and they are obviously out for money, so I doubt the main structure will be torn down anytime soon. A building this size would be quite expsensive to demo.

I might add, although this place is awesome beyond words, its dangerous. There is rusty metal, tons of broken glass, unstable floors, holes in metal grating (of which I came close to falling several stories from not watching where I was going), and unstable stairs. Thats just to name a few hazards. Oh and its on private property. So, I'm saying dont go here for safety reasons, but if you must, enter at your own risk, this place is only for the experienced explorer.

I second that. While exploring wit had h fiend Iactually lost him in a couple of areas of the bldg.
This place is massive, We were in awe of it's size 7 stories & 2 below ground.
So fellow explorers PLEASE! be aware of your suroundings if go to this location.

As you can tell from the pics it is very dangerous!

That's a pretty tight location man, and this is a great looking website.