Before and After Fire Pictures Below

The Pernell School project was accepted by the WPA in October of 1940, $44,000 was set aside as funding for the new building and auditorium. Actual construction began in February the following year, with Harold E. Flood as the architect, it was to be one of the county’s largest construction jobs. Eighty men were employed to do the job of leveling the three frame buildings that served as the current school plant. Then work would commence on building the 256 by 116 ft wide, native stone building using stones supplied from Garvin County Stone. The new Pernell School would have ten classrooms, a combined gym/auditorium, library, dressing rooms, offices, and storage space. It was equipped with heating, plumbing and electricity ensuring it to be the most modern facility that it could be at the time. Just four years after the school opened, $4,950 in bonds were issued for buying school buses for Pernell.

During the summer before the school year started in 1962, Pernell received numerous updates including reworked classrooms, refinished floors in the gym, and a new football scoreboard. In addition to these updates, a teacherage was added, the Pernell School Board started taking bids for the construction of a three-bedroom, 52 by 28-foot frame house. The first occupant of the teacher was then Superintendent W.W. Powell. Teachers for the 1962-63 school year were Ruby Milburn, English; Marvene Moore, Home Economics & Typing; Florence Fitzgerald, 1st & 2nd grades; Abbye Powell, 3rd & 4th grades; Louise Bivins, 4th & 5th grades; and Don Wiley as Principal & Girls Basketball Coach.

The Pernell Longhorns were known for their football team, also a very skilled group of boys. “Got my first and worst concussion playing there in 1962. Played for Healdton Junior High and we went there for a scrimmage game. Those Pernell boys were hitters. I could not remember anything or where I was after the hit” said Tommy Cariker. In the eighties, the school was the 432nd “largest” of Oklahoma’s high schools and average daily attendance fell around 47 students. Two of the teams’ star players were running back Willie Roney who had 1,384 yards and 36 touchdowns in the 1982 season and his sophomore brother Wylie who had 1,184 yards and 20 touchdowns. Pernell had a 13-0 winning streak that season as they went into the State Championship with Oklahoma Christian School, averaging fifty points per game. Shockingly the Longhorns won the State Champion for that year and the following. 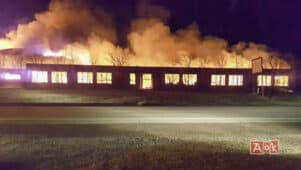 Unfortunately, after years of declining town and school population, Pernell was closed in 1992 and the students consolidated with nearby Elmore City. The once and still beloved school sat for decades deteriorating, citizens passing by daily reminiscing old memories. The loss of their school was already a blow enough but another came in 2016. News spread quickly through the small community that Pernell School was on fire, and it wasn’t a small one. It was around 9:53 p.m. on February 24th when the Pernell Volunteer Fire Department received a call about the fire. By the time the firefighters arrived on the scene the building was engulfed in flames and soon after the gym was on fire as well. “It’s currently under investigation for arson,” said Fire Chief Brent Balentine, pointing out how there were no connected electrical or other services that could have started the fire and one thing that will be checked is if an accelerant was used.

Gallery Below of Pernell School