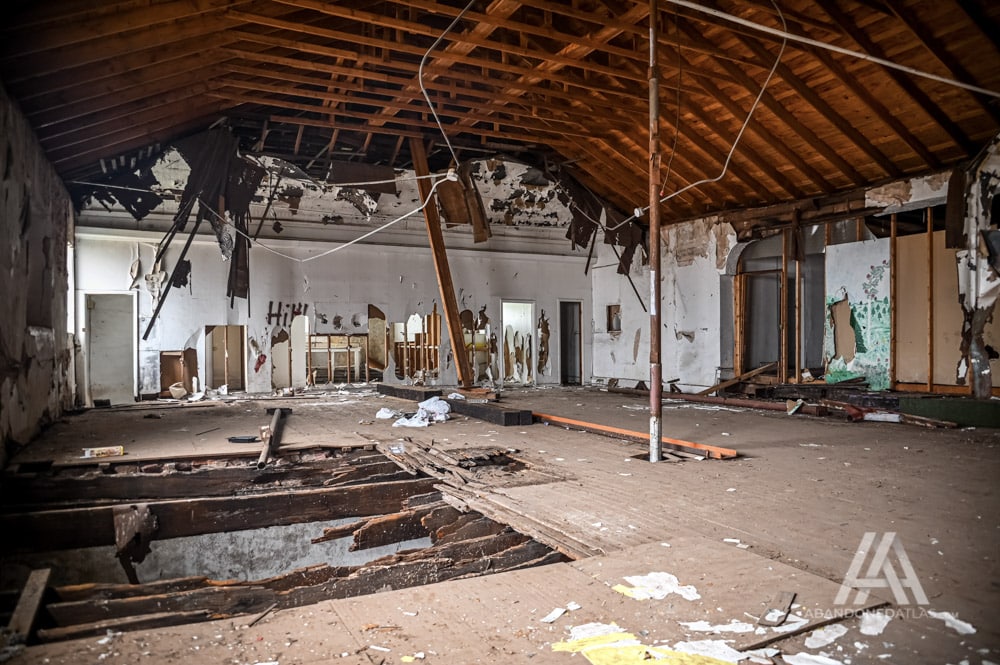 In 1892 one of the first federal prisons of the Midwest was built in the center of the United States. Dating prior to Oklahoma statehood this jail has acquired a few names such as “First Territorial Jail”, “Territorial Federal Jail”, and “Black Jail” but was known throughout the territory as the United States Jail at Guthrie. Deemed “inescapable” it was carefully constructed of red sandstone and brick with walls over a foot thick. A metal cage surrounded the main entrance on the second floor at the top of the stairs.

The “inescapable” theory was soon after disproven, on multiple occasions. In 1895, W.D. Lockett who was imprisoned on the charge of counterfeiting escaped by prying the locks off his cell and then making his way through a window connected to the kitchen of the prison. The biggest jailbreak of the federal prison happened at 9:30 p.m. on July 15, 1896. At the time fifty-seven prisoners called the jail their home but by the end of the night, fourteen would make their escape. Bill Doolin, member of the Dalton Gang, along with a few other jail leaders mustered up the strength to overpower both guards, steal their weapons, and lock them within a cell. Cells were unlocked and flung open, those who escaped were Bill Doolin & Dynamite Dick of the Dalton Gang, Charles Montgomery, Jim Black, Bill Crittenden, Ed Lawrence, George Lane, Kid Phillips, Henry Irvin, Bill Jones, C.O. Nix, Lee Killiam, and W.M. Beck.

The Nazarene Church of Guthrie’s Rev. J. Walter Hall purchased the building in early 1924 after the jail closed due to the number of prisoners decreasing and the county having no use for it. The third floor was removed to make way for the second floor to be remodeled into a sanctuary. The first floor was stripped of its cells and turned into classrooms for the Sunday School classes.

During a visit in July of 1934, Rev. C.W. Burpo liked what he saw in Guthrie so much he accepted the pastor position at the church. During this time attendance surged reaching 170 memberships, 235 Sunday school students, and around 210 in average attendance. It became apparent that the congregation was becoming too large for the building and soon an enlargement and more renovations were underway. Around $3,500 was spent on the work of adding nearly 2,000 square feet east of the building. White stucco was added to all sides covering the original red sandstone, in later years it was painted. Guthrie Church of the Nazarene resided in the old jail for the next fifty years until a new building was purchased elsewhere in 1970. In some years after it was used by the Logan County Association for ‘Retard’ Citizens and then after becoming vacant again was donated to the Territorial Gunfighters Club around 1990 in hopes of restoration but financial problems put the project to a halt.

In 1993, Linda Greene and her husband Allen Ross purchased the derelict building. During this time Linda Greene’s cult, the Samaritan Foundation, resided here, their mission was to rid the world of evil. Allen Ross and other members moved to Oklahoma and cut ties with their family members.

On October 14, 1993, an emergency child custody hearing brought the cult to light when Jonathan George said he had not heard from his wife and children after they went to a “seminar” in Guthrie. It was discovered that Nelli George and the children were living at the former federal prison building, now owned by the Samaritan Foundation, with nine others. Nelli George claimed she did not want to return to her husband in Massachusetts and filed for separation. The children were returned to their father and he was granted temporary custody.

In 1995, after multiple tips to the police, they investigated the building and discovered the horrific conditions within the building that had laid neglected and abandoned. The Department of Human Services was informed and declared the property uninhabitable by any living persons. Thus the cult up and moved to Cheyenne, Wyoming that same year.

Another restoration project on the more than a century-old building by the SOC Foundation has popped up in the last few years. Manager of the building, Carol Hirzel of the SOC Foundation, came in to replace the already damaged and leaking roof. The first phase of replacing the roof has been finished but due to the new bridge and other arising issues, the project hasn’t progressed more than that. While the First Territorial Jail project is halted the SOC Foundation has taken on other projects of preservation around Guthrie.

Gallery Below of United States Jail at Guthrie

I live in Guthrie and in the 70’s and early 80’s it was the “Teen Center”. Many of my friend would go there and hang out. I wasn’t allowed to go but someone may come by and let us know all about those times.