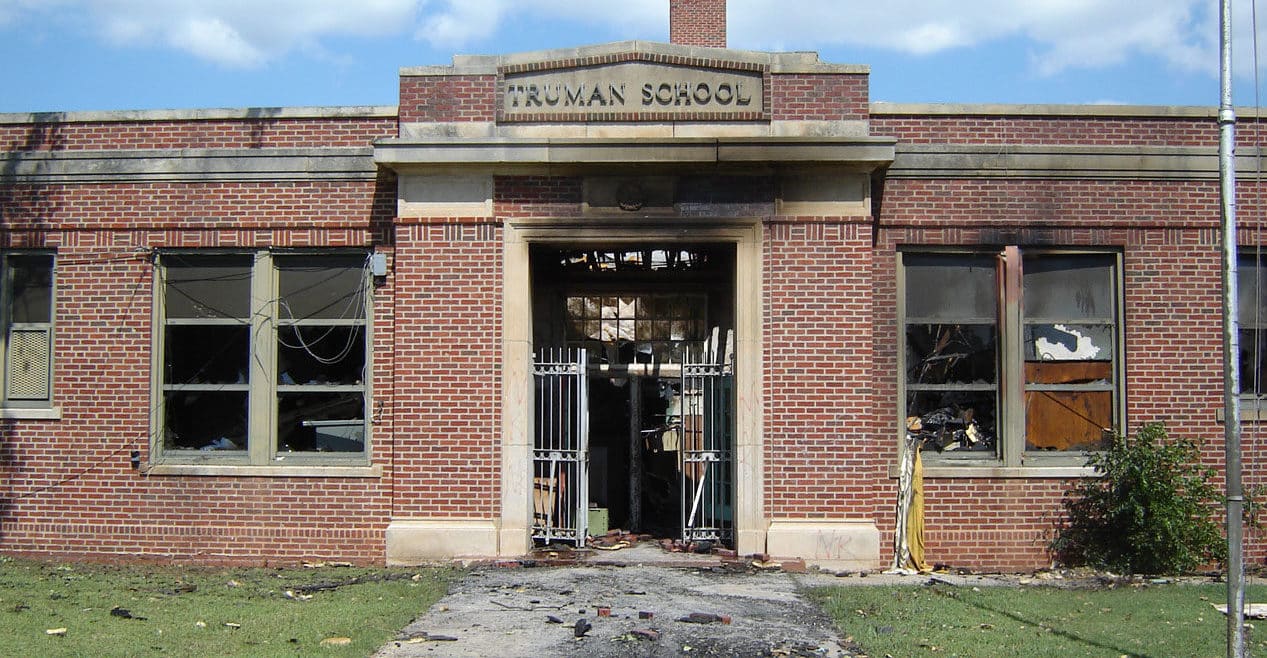 The abandoned Truman elementary school caught fire today. Closed for nearly 20 years its fate is definitely sealed. “There was somebody with fireworks and then I saw the smoke coming out of the top of the building, and then I called the fire department,” said the resident, who asked not to be identified. “It’s ridiculous, truthfully. They say the east side (of town) is bad anyways and this just makes it even worse.” quote from neighbor who saw the fire begin. (newsok.com) The building has been vacant for more than 20 years, said Oklahoma City Public Schools spokeswoman Kathleen Kennedy. A neighbor said the school has been used for storage, but Kennedy said she couldn’t confirm that. The school was closed in 1987 as school officials faced pending state funding cuts, according to Oklahoman archives. Then-Superintendent Arthur Stellar said closing Truman, which didn’t meet fire code standards, and another school was a “more humane” way to address budget cuts than reducing staff or instructional costs. The school had survived closure threatened during previous rounds of budget cuts.

Truman originally was one of the city’s all-black schools. Oklahoma City’s school board ended segregation in 1955.

I had a blast going to school there. Went there just before it closed down. Around 1984 or so. Shame it’s gone.

I was told once of a story about 2 children came up missing in the 1960's in this school and that they were never found. I have searched the internet and cannot find anything about it.

The school is, unfortunately, no longer there. Such a sad ending to a piece of history.

DLB I attended Truman Elementary from the kindergarten until my 6th grade year (1964 to 1971). I have nothing but but great memories from my school days there with my brothers,sisters and most of all my mother when she walked me to school. I hated to find out it had burned and was eventually demolished. It was very hard to say goodby to

I went to school at Bath in 1945………started kindergarten there……..at that time is all white. They had nice a swimming pool then; it was nice to cool off in the summer time. This was during WWII but, I still remember it.To go to the State Fair, go South on Kalham go to East Alice, head East about 10 blocks and your were that the Fair Grounds. R.W. Jeffers,

I take a shortcut to work that goes by this. They are tearing it down now, the cool part is the bricks are all being stacked onto pallets to be re-used.

This school was in top condition until the whole fire happen. Maybe a few broken windows.

1930's is a very general date, I'll do some more research it might not be named for Harry Truman

Truman was originally called bath elementary than dew spivey and then Truman. it was not originally a black school. Bath aka Truman was built to replace Lowell school which was passed down to black students by the school board to become the second Douglas high school aka page woodwind. I went to Truman in its last year 86-87 in the first grade.

Just a question: Was name of school changed sometime? Truman was virtually unknown in 1930s when school was built.

the name of the school was Bath,i think it was the developer of that area.

Nooooo! I hate it when things like this happen. If old buildings dont get torn down, they end up catching on fire one way or a nother, seems to be their ultimate fate…

Damn kids screw up everything for us explorers. Someone needs to go grab some pics after everything settels down but before they tear it down! Keep us updated!

This is really a high quality website. I like what you have started. It shows your passion for Design/Architecture. Good luck with the furture development of your website.

Thanks Chris! We hope to make it a great site!