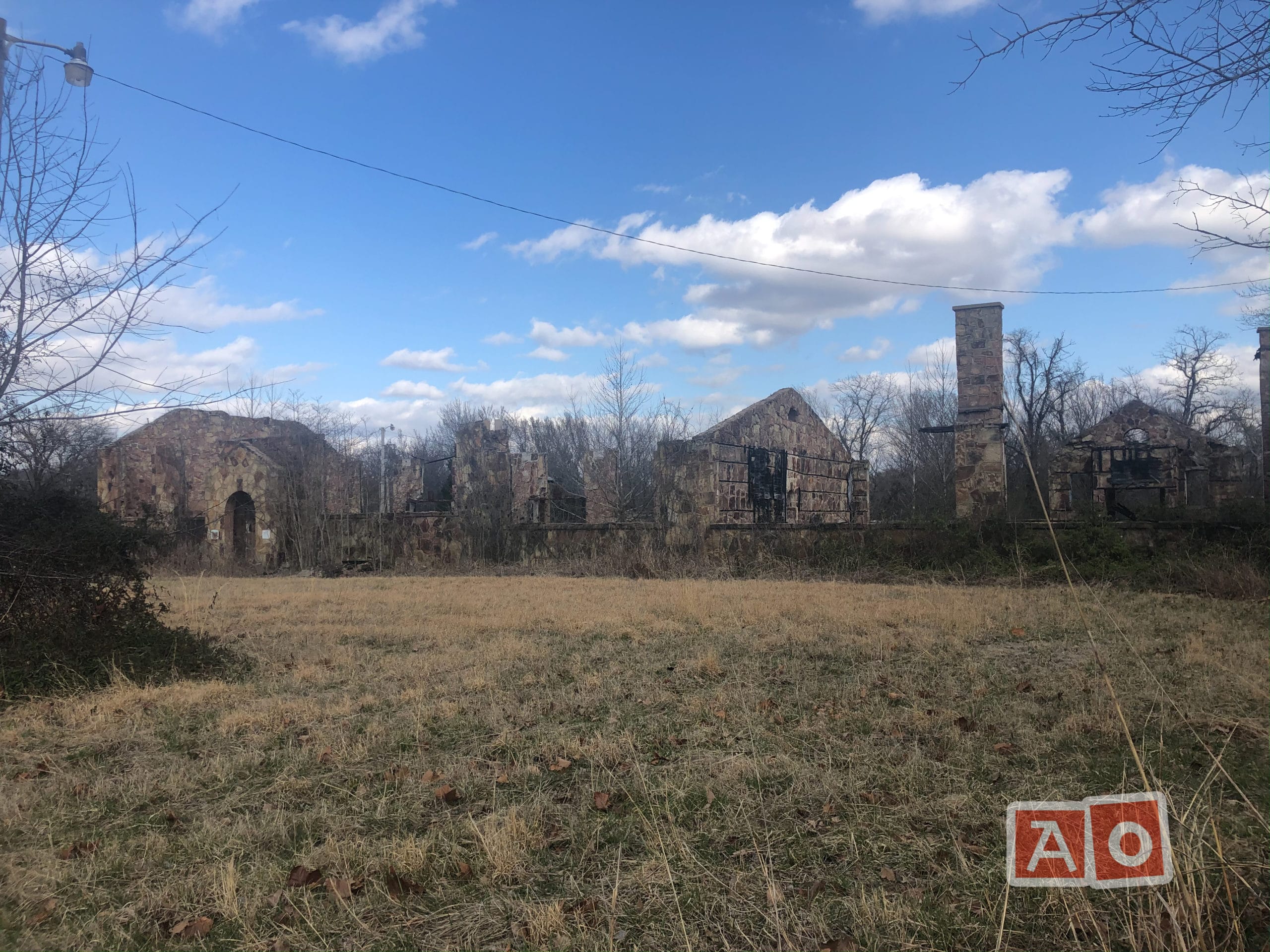 Originally there were around 50 all-black towns established in Indian Territory, Tullahassee is thought to be the oldest of the 13 still standing all-black towns. Tullahassee’s history is rich and captivating to learn about. The town was created in 1899 and adopted its name from the nearby school that the Creek Nation built and opened in 1850 called Tullahassee Mission. The Mission suffered a terrible fire that destroyed the entire school in 1880 but was rebuilt in 1883 as Tullahassee Manual Labor School to educated former slaves. In 1916 Flipper Davis College was the first African-American private institute in the state and resided in the Manual Labor School up until its closing in 1935. 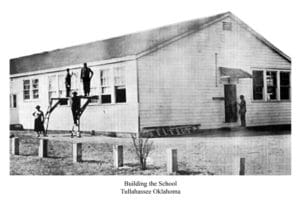 In 1939, the WPA approved the $10,626 project for the Tullahassee Schools and assigned 38 workers to build the high school, a white building that contained six classrooms and a principal and secretaries offices along with a large gabled, sandstone elementary school containing 4 more classrooms, a cafeteria that doubled as an auditorium with a stage and a gymnasium until the John Ford Center was built later on. The school was named after American historian Carter G. Woodson, who was the founder of Negro History Week in 1926. It later in 1976, became Black History Month. The cafeteria had two amazing cooks, Emma Mae Walters and Josephine Gaines who were loved by the students and oftentimes cooked all day from scratch to give the children and amazing and nutritious meal.

The school obtained many athletic achievements in track, basketball, and baseball. Before the John Ford Gymnasium was built, basketball games were held in the auditorium/cafeteria of the elementary school. “Championships were won in the men’s division in that cafeteria.  The one that I know of is from 1945.  There were several years of successful regional runs to state after that even through 1990.  I remember going to games and everyone yelling Woodson, Woodson, Woodson!!!” said Mayor Keisha Gaines-Currin. The Lady Woodson Wildcats Basketball Team shown left were the 1967-68 champions! The also had a volleyball team and a band that played their Tully Tunes court side of the basketball games. It was said that a lot of these wins by the Wildcats were not recorded by the state, I assumed this to be true after looking through many predated local newspapers.

In the summer of 1962, Carter underwent some renovations that included vented heaters for each of the classrooms and decorative changes. Classes began on August 27th of that year, offering 26 different subjects including English I and II, American and English Literature, Composite Math, Geometry, and Algebra I and II. Not only Carter but all of Tullahassee’s former schools have a deep root in Oklahoma history, being some of the most progressive schools and excelling incredibly in the education of their former students. The graduating class of 1962 was the largest amount of graduates Woodson had in a single year with a total of 30 students receiving diplomas.

In 1990, when the town census was at its lowest of 90 residents it was decided that Carter G. Woodson would consolidate with Porter School District. In a vote of 389-86 the schools would merge to have a joint enrollment of around 600 students. It has been speculated that the principal of Porter Schools at that time threw away all of the records and trophies the Wildcats had acquired over the years. This was the end of the Carter G. Woodson School District. But not the end of the Woodson Wildcats spirit and hope. The new school colors combined the blue of the Woodson Wildcats and the white of the Porter Pirates. “There were those who had a lot of pride in attending a school of color,” said former superintendent Gamble. “The loss of the school means a loss of identity for the community. Our school was unique,” Gamble continued, “It catered to youngsters who fell through the cracks at larger schools.” As a result of the consolidation Carter G. Woodson schools were owned by Porter Schools but eventually ownership was returned to the town of Tullahassee.

The gym was added to Carter G. Woodson Schools around 1950. After the consolidation, the gym was shut down as well. It was repurposed for the town for a short time after and became a place that brought the town together for men and women’s basketball games on Sundays and had a concession stand that brought the kids out to play. Submissions for grants to pay for much-needed renovations including a new gym floor were made in 2003 and 2005. A $15,836 grant was given to repair the damaged roof in 2003. And an $18,000 grant was given to repair the wood flooring. The money was spent but the job was not finished, the project was abandoned in 2006 and the building sat until Mayor Keisha Gaines-Currin started the project up again in 2016.”I have been working in the gym, painting, sealing holes and making repairs. I am currently still in the process. The gym needs a new floor and goals as well as updated restrooms.” There are a few ways you can help bring back the John Ford Center as a staple piece to the community and help the town, a GoFundMe has been created as well as the merchandise shop found  at Tullahassee Wildcat Foundation. If you would like to be contacted about future volunteer opportunities to help clean up the John Ford Center or any of our other locations fill out the form here.

Carter G. Woodson’s Elementary School building met a terrible fate on the night of August 26th, 2012. It was discovered a young boy had broken into the former elementary school stealing items and set the building ablaze in an attempt to cover his tracks. Tullahassee lost their school all over again, a devastating event for the entire community.

“That is a day that I will never forget.  I lived right across the street from the school at that time.  It was approximately 9 pm, I was in my kitchen and I seen the brightest orange glow come through my window.  I was in shock I didn’t know what it could have been.  I thought the Lord had came back but I didn’t hear any thunder.  I opened my blinds and seen nothing but flames! My heart was broken. The fire had totally engulfed the entire building. As I stood in my street crying with such hurt and pain I could feel the heat from the fire. I was in disbelief! Before I knew it almost everyone in the town stood with me as we all cried.” said Mayor Keisha Gaines-Currin.

Gallery Below of Carter Woodson School

I lived in Tallahassee as a little girl. Our house was right next to the field they had the black rodeo. My grandmother was Viola Howell and grandfather Jack Howell. My other grandmother lived right by the railroad tracks entering Tallahassee her name was Babe Trotter. My Dad is Marvin Trotter. My Mom was Martha Howell . My Aunt( grandfathers sister) was Josephine Gaines. I’m sure someone probably know all my family.

I know Mr. & Mrs. Howell. I knew Dorothy and her brothers…I guess she would be your aunt?

My mother (Evon Parker) and father (Edward Jackson Jr.) are both from Tullahassee. Sherd Parker, pictured on the All Black Town signage is my great-grandfather. As a child, I fondly remember attending homecomings in the gym with my Mom and Aunt Gloria Jean and other family members. My Aunt Gloria was part of the graduating class of 1962. There’s a lot of rich history and family history coming out of this great town!

My husband grew up in the area (Calvin Jones). He is always sharing warm and happy memories of Tullahassee and the surrounding towns. Also, Deborah Hytche is his his niece. We looked at the picture of the woman’s basketball team and he knows all by name with the exception of two team members.

The high school was a bunker brought from Camp Groober, Braggs Oklahoma

Hello Doris. My father was born in Tullahassee. I wonder if your have a connection to Carl Hytche? I had some questions about the Pleasant Grove Cemetery. My grandfather and great grandfather are buried there, their graves unmarked.

Hello Ms. Wallace, My roots are deep in Tullahassee, Wayne Hytche, took over for my uncle, and I don’t know how much information he passed on, and I don’t know if Wayne is still the caretaker there. Just to let you know, my uncle was Claron Jones. You can contact me via email at: walksalone_1@juno.com. God Bless.

I’m married to a Hytche. I found out that I have family buried there also. We have a list of the Graves. Carl is my husbands nephew.

What a really sad story of one time a beautiful school. I have heard stories about the school and there staff