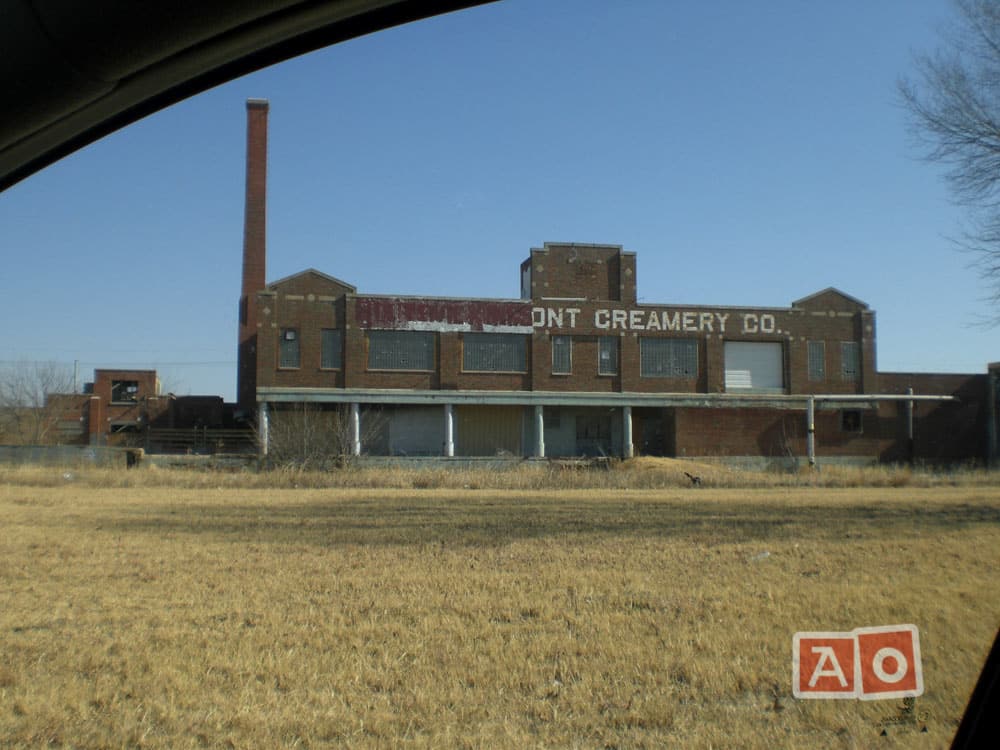 It is still one of the most captivating buildings in Lawton, a multistory fortress of red brick occupying a solid city block, its signature narrow smokestack rising above almost everything else in the downtown industrial zone.

But if it’s still imposing enough to demand attention, in its heyday the Fairmont Creamery at 411 SE Larrance Avenue was not only recognizable, it was a center of attention, an absolute beehive that employed well over 100 people who turned the milk of thousands of dairy cows into ice cream, cottage cheese and other products consumed by generations of Lawtonians.

The creamery that stands today was built in 1929, with expansions added in 1979 and 1985, but the Fairmont Co. actually came to the still budding town of Lawton in 1905, according to Travis Warner, who took over care of the creamery four years ago with his brother, Derek Pever.

“Talking to old-timers and to my father, in 1905 it was originally right by the railroad tracks and people would come in and set up next to it to sell fruits and vegetables from carts, and it was like a market here every weekend,” Warner said.

Though most of the equipment that made the creamery what it was has now been removed, standing inside the 70,000-square-foot building, one can still get a sense of its rich history.

“At that time, it was actually the first state-of-the-art factory in Lawton,” Warner said, pointing out stout concrete columns rising from the building’s foundation to support the tremendous weight of the second-story concrete floor, which is 28 inches thick in places.

Warner has never seen accountings of how much milk flowed through the creamery or of how much ice cream or other dairy products shipped out on a day-to-day basis. He points out though, where a 10,000-gallon tank sat on the first floor for storing milk. On the second floor were another 10,000-gallon milk storage tank and two more that held 5,000 gallons each.

Nearby, the original freight elevator still stands in its shaft.

“When we were doing the (interior) demolition we got it working and used it,” he said.

In an area on the second floor where creamery employees once gathered before work, the doors of old wooden lockers stand open, as if left that way for a final inspection.

Down below, in the basement, Warner points to a dark space beneath some stairs where the building’s original blueprints were found.

“My dad was really excited about finding them,” he said.

There were offices in the basement, and a massive boiler that produced steam used by the factory.

On this recent day in mid-August, it was nothing if not hot inside the cavernous building, but when the Fairmont was a busy business concern, it was kept very cold inside.

“There were just miles and miles and miles of piping that went through here to keep it chilled.” Warner said. He points out a hole in an interior wall where a conveyor once swept ice cream being made through a “chill room” kept beyond chilly and, indeed, well below freezing.

“There was a conveyor that went through and by the time the ice cream passed through in 48 feet it was frozen solid,” he said.

The Fairmont Co. pulled out of Lawton in the 1970s. The creamery was then operated for a time by Farm Fresh, but has stood vacant for the past several years. Warner’s father, Joe Warner, bought it in 1995 and it remains under ownership of Fairmont Rentals, which he established.

Gallery Below of Fairmont Creamery – Lawton

I wish someone could find one of the special quart glass milk bottles with the choke neck and spoon for pouring the risen cream from the pasteurized milk. This preceded homogenization. It was a great convenience.

[…] Dasia graduates this year and is also a champion cheerleader. After we spent a couple hours at the Fairmont Creamery, I decided I was hooked. I’m TOTALLY a senior photographer. Why couldn’t I have looked this […]

Everyone, reading most the comments invokes a feeling in me of how much the Fairmont Creamery has meant and means to Lawtonians. Rest assured that John and Gayle have great vision for this property and a group of us, The Fairmont District Experience, Inc., believes this to be the beginning of something wonderful for the Lawton community. While John and Gayle work diligently on the Creamery, the group is focused towards getting people comfortable with the area. We have a weekly organic farmers market at the Fairmont Marketplace and on a reoccurring basis events for the entire family. The building… Read more »

John and Gayle Rutherford , the new owners have done a tremendous amount of work to the original building. Thanks to their efforts, one of Lawton's oldest historical buildings will not be lost or forgotten. Lawtonians should be very grateful for those two and the work and money they have poured into that building to save a piece of Lawton's history. The great "all knowing" city of lawton had the creamery on the demolition list when John and his wife bought the building. They have been battling the city council for quite some time to save the building from destruction.… Read more »

Thanks for sharing Jimbo! https://www.facebook.com/AbandonedOklahoma/posts/…

To: Mr. Jimmy Cann Jr, I'm trying to reach you about a roof job that was done that was done by All Pro Roofing or Roofing By All Pro or "Superior Roofing by All Pro" or what ever name they are switching to. Please contact me at ceciliabeauchamp at yahoo.com Thank you.

Some photo's are not of the Creamery…….. On a side note. It is being rebuilt. There is alot of construction going on right now.

Drove by this place in the morning. The building would make a great micro-brewery. Plenty of history, large building, just need the cash to restore and install the equipment.

Outstanding. My Dad worked at Fairmont, he started inside, and ended up driving a route truck. He worked there from about 1960 to 1973. Fairmont was the main topic of conversation everynight at the dinner table. I still have one of the old steel milk crates they used. I would love to tour thru the place.

wonder how i can find an old fairmont train car. sure would look great setting out front
gayle

I absolutely love places like this!! I grew up in Lawton, and love learning about it's history. I didn't appreciate it when I was younger, but I sure do now that I have a family. I was down in that part of town not too long ago and saw the building there; I was really intrigued about finding out more. Your site is awesome; thank you so much for helping us remember the forgotten.

Just stumbled on this site and thankful I did! My Father was Chief Plant Engineer for 30 years at this plant. It is heartbreaking to see the building in it’s present condition. So much history. Thanks for stroll thru your site!

Thanks for swinging by and commenting SKay! It’s great to hear stories from family or workers of any of our places. It really gives meaning to the place. The place is forgotten by so many people, but you and your father remember the creamery! Its great to put real history with these, told by the people that lived it! Thanks for the comment!

[…] stripping the paint off the outside of the building, revealing a Fairmont Creamery Co. sign. The Fairmont Creamery in Lawton was the only popularly known location in Oklahoma so this find was exciting and surprising. […]

Did this factory also operate a store that sold ice cream in part of it? Our aunt used to bring us to a big factory place and bought us ice cream in what I remember to be a cavernous place, they had tables and a long counter from which we ordered. Is this the same place?

A Gal
Reply to  A Gal

As I was shopping with my grandsons today for their choice of ice cream flavor, I was reminded of the best ice cream I ever ate. It was my grandfather's favorite…Lemon Custard from Fairmont Creamery. He lived in southwestern Nebraska. When visiting there were the only times I had it. I'd love to taste some of that again. It didn't "sound" good to me at first but it was wonderful. I've never found anything close to it since.

It is hard to dispute the fact that car shopping is a stressful, anxiety-ridden task for many individuals.
The sheer size of the expenditure involved and the myriad of choices on the market make the need for education and
information quite critical. Fortunately, the tips
below can make the process far simpler than you may have
believed.

Shopping for cars is generally a stressful experience.

It does not have to be, though. With a little knowledge and determination, your car

that you enjoy, with a shiny new car to show for it.

I drove buy there last year and spoke to the owner. The building in no longer abandoned. The 2nd story has been converted into a house and repairs are being made to the 1st floor. The owner said that when he was done with the construction he wanted to rent out shops on the bottom floor. The people in Lawton are glad that he is renovating it and I would like to see an update on this story..